Europe needs to look at ′bigger picture′ for migration | Europe| News and current affairs from around the continent | DW | 10.08.2015

Europe needs to look at 'bigger picture' for migration

Thousands of migrants have died trying to reach European shores, and the EU is struggling to cope. As Martin Kuebler reports, some critics believe the answer lies in opening the borders, rather than further restrictions. 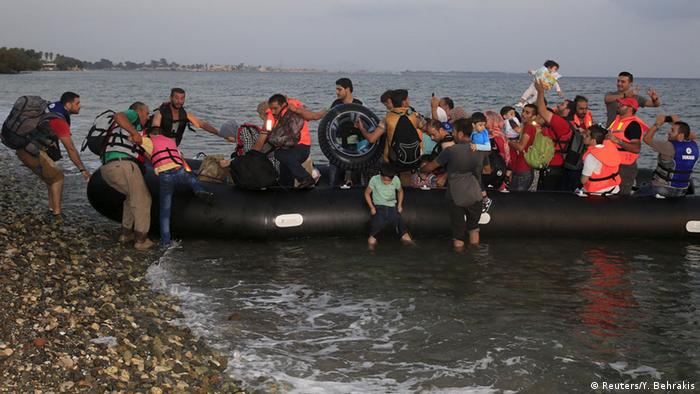 More than 1,000 migrants were rescued by European patrol boats over the weekend, as they attempted the treacherous crossing across the Mediterranean to Europe.

They were just the latest to make the trip, joining around 224,000 other people who have escaped war and famine since January, according to an estimate by UNHCR, the UN refugee agency. Among those are around 98,000 who arrived in Italy and 124,000 in Greece, up nearly 150 percent on last year's numbers.

More than 2,100 migrants have died so far this year in their attempts to cross the water, the latest in a shipwreck last week off the coast of Libya in which 200 are thought to have drowned. Last Thursday, in reaction to the latest tragedy, EU liberal leader Guy Verhofstadt published an open letter to European Council President Donald Tusk to address the "increasingly untenable" situation on the EU's borders.

Verhofstadt said EU leaders needed to come together for an "urgent" summit to develop a "comprehensive European approach" to "solve what is a growing humanitarian crisis."

Europe needs to look at the 'bigger picture'

"Any system that's put under strain is going to show its weaknesses. And because the asylum system is now under tremendous strain, weaknesses are becoming more and more evident to everyone," said Michael Diedring, secretary general at the European Council on Refugees and Exiles (ECRE).

Diedring believes the EU has been making some progress when it comes to dealing with migrants, but stresses that it's part of a continuing discussion. Europe needs to stop looking at migration and asylum in a constant crisis mode, and instead look ahead at the "bigger picture."

"We need to make some very fundamental decisions on Europe's role, with respect to asylum and migration. And those are not emergency decisions, those are decisions that need to be well thought out," he said.

Diedring spoke to DW from Greece, where in the coming days he was set to visit migrant camps on the island of Lesbos. Located just off the Turkish coast, the island has seen a remarkable influx of migrants in recent months. Diedring said the conditions of refugee camps were "absolutely shocking."

After visiting the islands of Lesbos, Kos and Chios last week, Vincent Cochetel, UNHCR director for Europe, called it "total chaos." "In terms of water, in terms of sanitation, in terms of food assistance, it's totally inadequate," he told a news briefing.

"When you have 4 million Syrians now that are on the move, that are outside of the country, and you have a European member state that's complaining because of a few hundred [refugees], that's just not acceptable," said Diedring, describing them as the "neediest of the needy." "If member states are not willing to help those people, then who are they willing to help?"

People fleeing war continue to land in Greece, as the cash-strapped country sees migration numbers soar. Tens of thousands of refugees have made the journey in 2015, hoping for a better life in Europe. (10.08.2015)

Frontex says Greece and Hungary are buckling under an unprecedented influx of migrants. The EU's border agency wants nations to commit more vehicles and personnel. (07.08.2015)

The 28-nation European Union has told member states that expressing regret over the latest migrant tragedy was no substitute for action. Some 200 migrants were feared drowned when their vessel sank off the Libyan coast. (06.08.2015)

In light of the upsurge in migrant numbers in recent months, there have been increasing calls for the EU to create safe and legal means for asylum seekers to reach Europe.

When it comes to moving large numbers of people, Diedring said "what it really comes down to is resettlement," calling it "the only way that you're going to be able to react, or the best way, to react to the sorts of numbers that you're talking about." He believes Europe can be doing more in this area.

Another method is family reunification, wherein a migrant is allowed to come to Europe to join a family member already living there. Diedring does concede that bureaucracy often gets in the way.

"Of course, people on the run don't always have the time or the ability to pick up the kinds of documents that some bureaucrat might need," he said, adding that the current process needs to be faster and more practical. He pointed out that in some situations, family reunification can take a year or longer.

A third method is the humanitarian visa, which Diedring said gives member states a legal way to bring the most vulnerable safely to Europe.

Mikael Franssens, of the CIRE (Coordination and Initiatives for Refugees and Foreigners) in Belgium, points out that increasing restrictions on Europe's borders are counterproductive and will only lead to more deaths.

"If you enact more restrictive policies, you just move migration flows from one point to another," he told DW, pointing out that harsher border controls in one area only serve to increase border crossing attempts elsewhere. "It's a little bit of a cat-and-mouse game.

"You cannot really repress migration flows. The more you repress them, the more they become incontrollable. And the more are accompanied by all kinds of phenomena which are problematic, like human trafficking and social dumping." 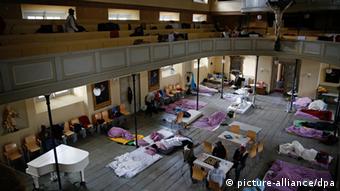 Many migrants have been housed in emergency shelters across the EU, such as this church in Hamburg

Instead, Franssens thinks the EU needs to be doing more to open the channels for legal migration, both for economic migrants and asylum seekers. And he believes the worries of increased social problems said to accompany migrants are overstated.

On Monday, the European Commission announced plans to give EU member states 2.4 billion euros ($2.6 billion) to improve their migration programs, with a focus on improving asylum procedures, increasing capacities and furthering integration programs such as language training and counselling.

Join the discussion and add your comment below. Thread closes after 24 hours