Borussia Dortmund are through to the knockout rounds of the Europa League, taking one step towards the final in Basel. Qabala were brushed aside on a comfortable evening before the Ruhr derby on Sunday. 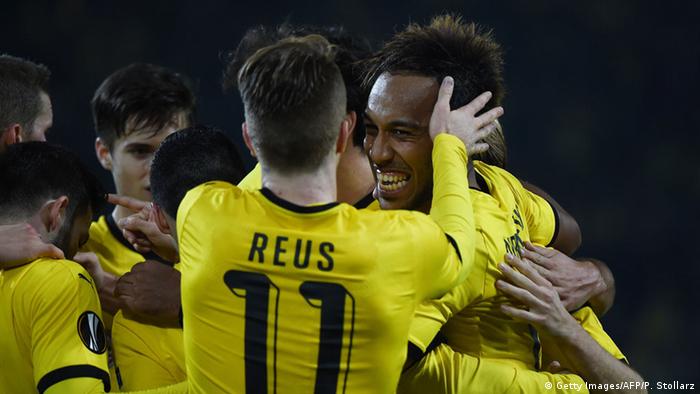 Borussia Dortmund are the first team to progress to the Round of 32 in the UEFA Europa League following a 4-0 win over Qabala on matchday four.

Dortmund's second win in succession against the Azeri side, coupled with Krasnodar's 2-1 win over PAOK Salonika, sees the German team progress to the knockout phase of the competition where they will also be joined by eight clubs dropping out from the Champions League.

Thomas Tuchel was at pains to stress that his side had 100% attention on the Qabala task ahead of Sunday's all-important Ruhr derby against Schalke. The Dortmund boss shuffled his pack slightly with Ilkay Gundogan and Shinji Kagawa earning a rest. Adnan Januzaj, named on the starting team sheet, dropped out at late notice and started on the bench.

Matthias Ginter was Januzaj's replacement in the XI and Tuchel operated with a back-three. The yellow-and-blacks were controlled and dominant against the side from Azerbaijan. Henrikh Mkhitaryan started after being left out of the trip two weeks ago and he fired the first warning shot to keeper Dawid Pietrzkiewicz on 12 minutes. 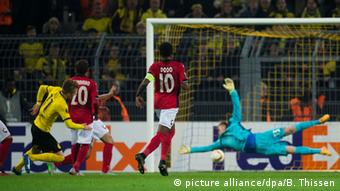 Marco Reus has 17 goals in 32 competitive matches for Dortmund

Marco Reus brought the game to life in spurts with quick dribbles and dangerous attacks, but Qabala stood firm until the 28th minute. The German forward headed past before darting from left-side-to-right-foot and blasting the ball past 27-year-old Pietrzkiewicz.

Pierre-Emerick Aubameyang was just as desperate to add to his 20 goals so far this season and his similar burst from the left created the opening, but his shot struck the stanchion behind the goal. Before the first half came to a close, Dortmund upped the pace with Mkhitaryan bringing out an excellent save from the generally unconvincing Polish keeper.

On the stroke of half time, Aubameyang carried on his fabulous scoring form this season, striking the ball under the keeper from the left-corner of the box. Efforts from Gonzalo Castro and Mkhitaryan could have opened the floodgates earlier than Dortmund eventually managed to.

On 67 minutes, a corner kick struck Qabala striker Zenjov and the ball went past his own keeper. Two minutes later, Dortmund attacked with poise and secured a fourth of the evening. Right-back Lukasz Piszczek found Mkhitaryan and the Armenian star thumped home a brilliant finish off the underside of the crossbar to confirm Dortmund's progression to the next round.

Raul Bobadilla was the center of attention as Augsburg kept their European dreams alive with two games left. Meanwhile, Johannes Geis scored for Schalke who could only manage a 1-1 draw at Sparta Prague. (05.11.2015)

Join DW for the fourth matchday of the UEFA Europa League. Up tonight, Borussia Dortmund host Qabala before Schalke and Augsburg are in action. Follow us on twitter @DW_Sports for more updates. (05.11.2015)

Sane proves to be the difference once again as Schalke salvage a point at home to Sparta Prague. Meanwhile, Augsburg confirmed a historic night in their history with their first-ever win in the competition. (22.10.2015)