Sane proves to be the difference once again as Schalke salvage a point at home to Sparta Prague. Meanwhile, Augsburg confirmed a historic night in their history with their first-ever win in the competition. 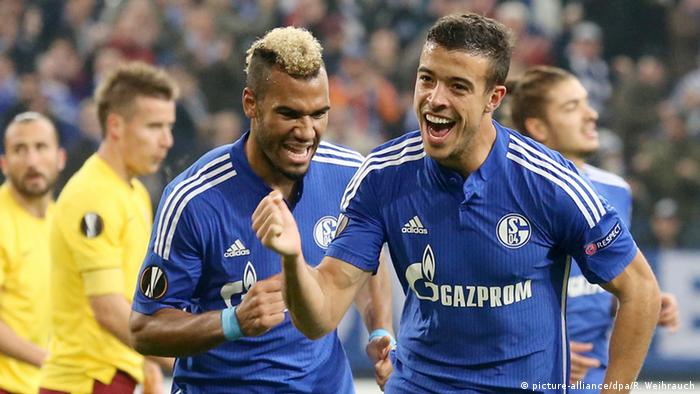 Franco di Santo and Leroy Sane found the scoring touch for Schalke as they held on to a point at home to Sparta Prague on matchday three.

Sane scored his fourth goal in seven matches to square the game 2-2 against the most successful side in the Czech Republic. The visitors canceled out Di Santo's opener with two of their own in a 13-minute spell to stand on the brink of a massive scalp at the Veltins Arena.

After just four minutes, Kaan Ayhan, a free kick specialist, delivered a fantastic cross for Di Santo who beat his markers and headed in his fourth goal in two European matches for the Royal Blues.

Ayhan, another Schalke academy graduate, carved out the best of the chances with his powerful, right-foot deliveries from range. The 20-year-old crossed for Eric Maxim Choupo-Moting who nodded over the bar from around seven yards out.

Schalke's midfield had a different balance than normal with Leon Goretzka partnering Pierre-Emile Hojbjerg and Ayhan. Goretzka's running from deep proved a problem for the Czechs and he skewed a shot wide from inside the box on 38 minutes.

But the visitors took just five minutes to level after the restart. Schalke's passing from the back was intercepted and the ball fell kindly to Nigerian striker Kehinde Fatai who tucked into the corner.

Andre Breitenreiter dipped into his substitutes to change the game - Johannes Geis and Leroy Sane coming on about a minute before Lafata's strike. And Sane struck the equalizer late on, his fourth in seven games, to protect Schalke's unbeaten record in the group. 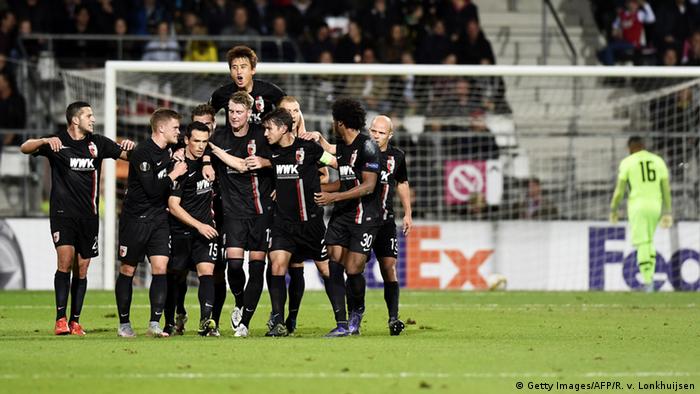 FC Augsburg picked up their first-ever win in the UEFA Europa League with a 1-0 defeat of Dutch side AZ Alkmaar.

Markus Weinzierl's side are bottom of the league with five points from nine games and have saved their better performances for Europe. Augsburg should have collected points from matches against Athletic Bilbao and Partizan Belgrade, but missed too many chances in both matches.

However, Weinzierl's gamble this summer on injury-prone Germany veteran Piotr Trochowski paid off as the 31-year-old scored the decisive goal from a set-piece late in the first half.

The Dutch side were largely in control of proceedings, but struggled to find enough players in space behind the Augsburg defence. Goalkeeper Marwin Hitz made an important stop to prevent Souza opening the scoring for the hosts on 19 minutes.

However, with around a minute to play until half time, Trochowski sent the ball over the wall and into the corner from a free kick. The experienced German international has had little impact at Augsburg, but that moment of quality was precisely the intention in the summer when he signed a pay-as-you-play contract.

AZ finished up with eight shots on target compared to Augsburg's two, yet the Germans showed the tactical nous to come out with all three points. Weinzierl's men are now back in the hunt for qualification ahead of the return match with AZ in two weeks.

Borussia Dortmund stand within touching distance of a place in the knockout stages of the Europa League after a 3-1 win against Qabala. Dodo scored a late goal for the home side, but the Bundesliga side took the points. (22.10.2015)