Raul Bobadilla was the center of attention as Augsburg kept their European dreams alive with two games left. Meanwhile, Johannes Geis scored for Schalke who could only manage a 1-1 draw at Sparta Prague. 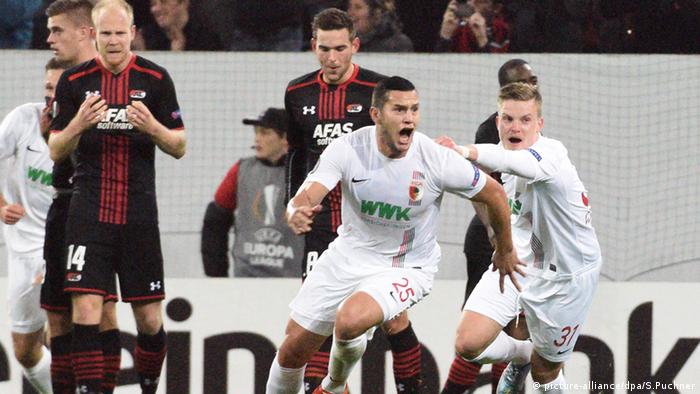 With their second win over AZ Alkmaar in the tournament, FC Augsburg are still in contention of qualifying for the knockout rounds of the Europa League.

The Bavarians, who won 1-0 in the Netherlands, came out on top thanks to an inspirational performance from Raul Bobadilla, the Argentinean striker scoring a hat trick to secure Augsburg's first home win in Europe. Ji Dong-Won added a third in the second period to cancel out a consolation strike from Vincent Janssen.

The evening could have got off to a bad start for the side bottom of the Bundesliga. AZ's classy number ten Markus Henriksen hit the woodwork in the 11th minute, while Bobadilla missed his first chance of the game four minutes later.

But the lumpy frontman brought out a moment of genius on 23 minutes, superbly bending home a free kick from around 20 yards out. Three minutes later, Caiuby found a great change of pace and almost put the Germans into a two-goal lead.

Bobadilla, who has played at Borussia Mönchengladbach and Basel in his nomadic career, was simply unplayable at times, mixing a deceptive agility with great technique. On 34 minutes, he slalomed past several AZ defenders before drilling the ball effortlessly into the corner.

Janssen cut the two-goal cushion in first half stoppage time when he ran in behind the Augsburg defence and finished impressively from the left-corner of the box.

Ji scored a third on 66 minutes before Bobadilla stole the limelight, completing his hat trick eight minutes later. The 28-year-old breezed through on goal and managed to get the ball out from under his feet and finish.

The striker was afforded a standing ovation on 77 minutes when he was replaced by Tobias Werner. On matchday five, Weinzierl's men welcome Athletic Bilbao to the SGL Arena before rounding off the campaign at Partizan Belgrade. 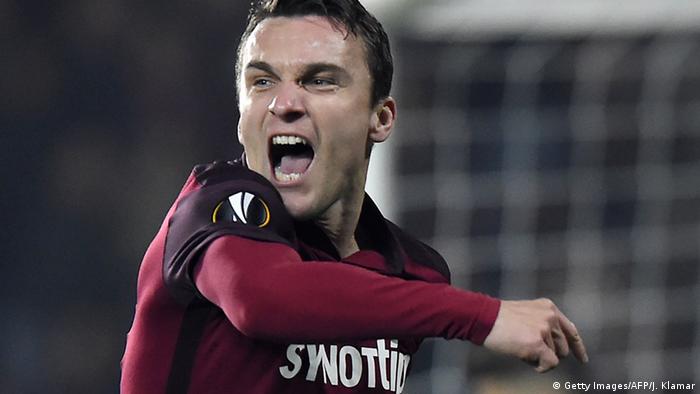 Schalke were held by Sparta Prague and will need to finish the task of qualifying for the Last 32 of the Europa League in their final two matches.

The Royal Blues, who take on rivals Dortmund on Sunday, fell behind in the first five minutes. Sparta captain Daniel Lafata missed a great chance in the second minute before firing the Czech side ahead two minutes later. Lafata timed his run well and directed home Lukas Marecek's cross.

Marecek, a bright, pacey winger, was a danger for Andre Breitenreiter's men and his shot on 20 minutes was off target. But Schalke equalised on 21 minutes when the referee awarded the visitors a penalty kick. Sparta's defender Costa bundled over Leon Goretzka in the box and Geis slammed the ball home to level the scores.

Schalke midfielder Goretzka was excellent for the visitors, but was unsuccessful with his own attempts at goal. He came close on 32 minutes, striking the crossbar with a shot outside the box.

Goretzka was close on 55 minutes and then 82 minutes - his two headers failing to hit the target. Breitenreiter's men couldn't find the winner despite their best efforts and can now look ahead to Sunday's derby before they focus back on European football.

As it happened: Europa League MD4

Augsburg and Borussia Dortmund collected impressive wins in the Europa League. Schalke drew in the Czech Republic against Sparta Prague. Check out the action as it happened on Thursday evening. (05.11.2015)