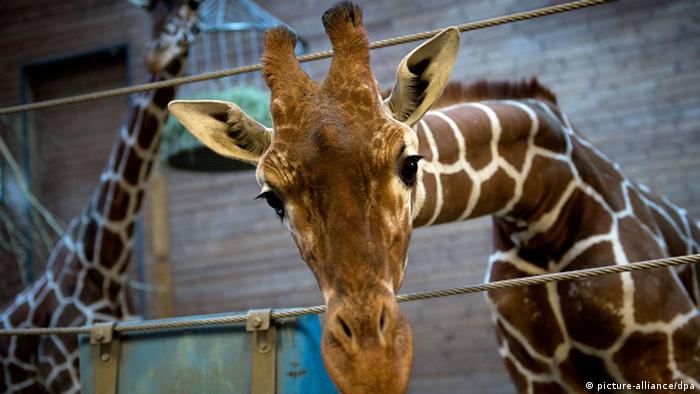 The Danish zoo that killed a healthy two-year old giraffe to prevent inbreeding has now euthanized four lions, including two cubs. The Copenhagen Zoo has said the killing was necessary in order to protect the natural structure and behaviour of their captive lion population. The older lions were euthanized in order to mimic natural generational shift, while the cubs were put down because they were unable to protect themselves and would have been killed by other lions in the pride.

Last month, this same zoo defended their decision to euthanize Marius the giraffe to prevent inbreeding and make room for more threatened species in their giraffe program. They were given the full support of the European Association of Zoos and Aquaria (EAZA), which governs 345 insitutions like the Copenhagen Zoo.

Dr. Lesley Dickie, EAZA’s executive director, spoke with DW about why euthanasia is an important part of managing captive animals.

DW: The Copenhagen zoo said that the plan to kill Marius the giraffe came about because they wanted to avoid inbreeding. They said that this giraffe's genes were already well represented among giraffes at the zoo and that it would be dangerous to keep him alive. Can you explain why?

Dr. Lesley Dickie: We try to avoid inbreeding. If there is sufficient inbreeding in a population, that population can start to have diseases, malformations; and it's not impossible that the population will then effectively crash... They are suffering and that is something we are trying to avoid. What we want is a population of giraffes that have a similar level of diversity as a population in the wild.

The Copenhagen Zoo has - over the years - bred an awful lot of giraffes: 36 males and 33 females. This is the first time in the history of their breeding program that they have been unable to place a male giraffe that they have bred. So this is a highly unusual occurance. They looked at all the options and said the most responsible thing they could do is humanely euthanize that animal.

Staff at the zoo have received death threats and more than 30,000 people signed a petition calling for the removal of Bengt Holst from his position as scientific director of the Copenhagen Zoo. What would you say to people who are angered by the death of this giraffe?

I can understand. You think 'why would a zoo put down an animal that they've bred'? In other parts of the world, what a zoo might do is just sell off that animal to an animal dealer and not care where it goes. We don't allow for the selling of any program animals in EAZA because we think that is unethical. If you can't be sure where the animal is going to end up, you are not taking full responsibility.

I understand that the death of an animal is not a good thing. But one giraffe was euthanized on Sunday, tens of thousands if not millions of animals were euthanized on Sunday for human consumption. So I would ask them to think about the ethical value of a horse's life, compared to a cow's life, compared to a giraffe's life. Why is it different? For me, it is not different. What is important is that the animal is well-treated in its life and if it is euthanized, it is euthanized in a humane manner.

Euthanasia for management reasons is rare. Most euthanasia that takes place is for health reasons. You see euthanasia in all sorts of environments. In the UK, the big deer parks will routinely euthanize hundreds of deer. In Copenhagen, the parks are at the moment euthanizing about 700 deer but that doesn't seem to have gathered any public interest. Anywhere where animals are managed, there may be situations in which they will be euthanized to control the whole population, to keep the whole population healthy.

Animal euthanasia is broadly defined as a pain-free or stress free death in which the animal is killed in as humane a way as possible. Here, the giraffe was shot in the head – and later dissected in front of a live audience, which included children. The meat was then fed to the zoo’s lions. How common is it for regular audiences to be present when an animal is put down? 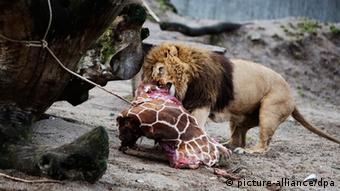 Parts of the giraffe carcass was kept for research, but the rest was fed to the zoo's lions

The autopsy was in front of the public. Copenhagen, along with most reponsible zoos, will autopsy every single animal that dies in its zoo. That way they can learn more about the animal, check for disease and take research samples. For many, many years, Copenhagen has performed autopsies in front of the public. This is not new, it has been happening for many years. And the Danish public is broadly accepting of this practice. 7,000 people were at the zoo on Sunday. They all knew an autopsy would be taking place. The parents made a choice about their children learning about a giraffe.

On Sunday, millions of children ate dead animals. I would say educating our children about where meat comes from - and this included feeding the body of the giraffe to the lion - is an opportunity. These children will have to make a choice as adults whether they wish to eat meat.

How do zoos decide what form of killing is appropriate? Here a bolt gun was used and the giraffe was shot in the head.

There are different laws in different countries about what is deemed acceptable. The vast majority of cattle euthanized in Europe - that's tens of millions a year - are euthanized with a bolt gun. So this is absolutely a normal practice and it is an accepted cultural practice throughout Europe.

There have been a lot of hyseterical headlines in some media outlets about the animal being shot. But this is exactly what happens in abattoirs every day. We would say that the Copenhagen Zoo is being open and transparent and it always has been.

Costa Rican officials want to close down public zoos and set the animals free. But releasing zoo animals into the wild is not quite so simple as it may seem. (09.09.2013)

During Ivory Coast's civil war in 2011, Abidjan's only zoo fell into disrepair and many animals died. Now, the facility is getting a makeover, and wants to become a center for conservation excellence in West Africa. (13.08.2013)

A giraffe's sleeping patterns will tell you whether or not she feels content. If she's just been transported from one zoo to another, for instance, or has just lost a mate, she'll skip over an essential phase of sleep. (04.04.2013)

Do you agree with the zoo's decision to kill a healthy giraffe and feed it to the lions?

Listen to the full interview with Dr. Leslie Dickie