European Union sources have said the bloc, along with the US and the IMF, is considering a financial aid package for Ukraine. Such a deal would, however, be tied to a solution to the political unrest in Kyiv. 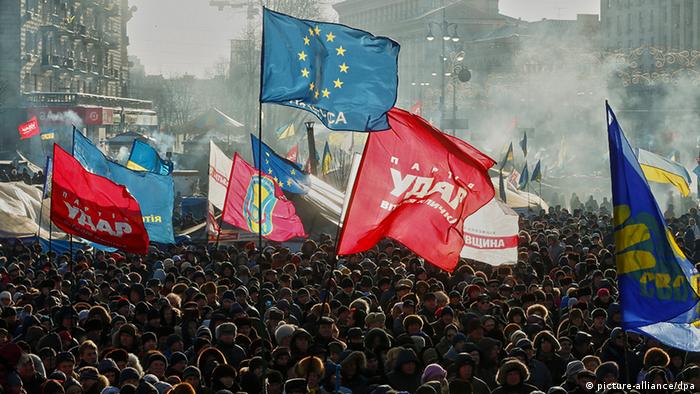 European Commission President Jose Manuel Barroso on Monday confirmed that Brussels was looking at options to provide financial assistance to Ukraine once the country solved its political troubles.

"What we can do for a country in difficulties, a country facing enormous challenges, whether we can do a little more in this critical phase, that's what we're currently discussing with other partners," Barroso said.

This followed an interview with EU foreign affairs chief Catherine Ashton, told the Wall Street Journal on Sunday, where she said Brussels and Washington were "developing a plan" to look at what help Ukraine needed "in different parts of the economy right now." Ashton will fly to Kyiv this week for her third set of negotiations with Ukraine's government and opposition since the unrest began.

Barroso also said on Monday that the EU was not prepared to enter "a bidding competition of who pays more for a signature from Ukraine," adding that the primary financial incentive Brussels had to offer was not loans, but rather the prospect of eventual membership in the world's largest free-trade zone.

The political unrest in Ukraine began in November when President Viktor Yanukovych, who returned to work on Monday after a brief stay in hospital, surprisingly stopped a planned deal for closer ties with the EU in favor of a rival agreement with Russia. This included a loans package worth around $15 billion (11.1 billion euros) from Moscow.

German Foreign Minister Frank-Walter Steinmeier endorsed the idea of an economic aid package for the Ukraine on Monday. Once the country had begun a process of reform, Steinmeier said, "then we must accompany [the process] and ensure that this difficult path does not end in an economic disaster."

Yanukovych issued a critical video address on his return to work on Monday, accusing protesters occupying government buildings of "vandalism." "We must say no to extremism, radicalism, the fanning of emnity in society, which is the basis of the political fight against the authorities," Yanukovych said.

The occupation of government buildings and an amnesty deal for the release of political prisoners jailed in the recent unrest has prompted a standstill between the two sides. The government has said the amnesties will come into effect once protesters relinquish the state buildings, while one opposition group - the Right Sector - on Monday said it would vacate two key sites in Kyiv once 100 prisoners were released.

Arseniy Yatsenyuk, the leader of Ukraine's most powerful opposition party - that of jailed former Prime Minister Yulia Tymoshenko - said on Monday that the opposition would seek a return to 2004 Ukrainian constitution enacted after the country's "Orange Revolution." The constitution has been revised since 2004 to expand presidential powers in the country.

Yatsenyuk said constitutional changes would "cancel the dictatorial powers of the president and transfer the right of governing the country to the Ukrainian people."

The issue is likely to figure in parliamentary debate on Tuesday in Kyiv, with Yatensyuk saying the opposition would be willing to vote on the issue immediately. Justice Minister Olena Lukash had said last week that the government was considering constitutional amendments, without providing more details.

Injured protester Bulatov leaves Ukraine for hospital, as Yanukovych checks out of his