Opposition leader Alexei Navalny has been sentenced to 15 days in jail for resisting arrest during a Moscow rally where hundreds were detained. Russia has rejected pressure from the EU and abroad to free all protesters.

Anti-corruption protests have been held across dozens of cities in Russia, leading to many arrests. Opposition leader Alexei Navalny was detained as he walked with supporters in Moscow. (26.03.2017)

Navalny: 'My name will be on the ballot'

Russian opposition leader Alexei Navalny has opened his Yekaterinburg campaign headquarters with an eye to the 2018 election. He tells DW his campaign for the Russian presidency will go on, despite his latest conviction. (26.02.2017)

Navalny alleges Medvedev took bribes from key Russian oligarchs under the guise of donations to charities. In a 49-minute expose Navalny even flies drones over lavish properties he alleges were bought with corrupt money. (02.03.2017)

The police crackdown stopped "the exercise of basic freedoms of expression, association and peaceful assembly - which are fundamental rights enshrined in the Russian constitution," the EU said on Monday.

The bloc called on Moscow to "release without delay the peaceful demonstrators" detained at dozens of rallies across Russia on Sunday. Washington echoed the sentiment, with State Department spokesman Mark Toner describing the arrests as an "affront to core democratic values."

Russia is facing a wave of anti-government protests that started with the well-known Kremlin critic Alexei Navalny sharing a Youtube video about Prime Minister Dmitry Medvedev. In the clip that went online earlier this month, Navalny accused Medvedev of owning mansions, yachts, and vineyards through a shadowy network of non-profit organizations. The Kremlin has shrugged off the accusations and the prime minister himself has made no comment.

The opposition, led by Navalny, announced anti-corruption rallies in dozens of Russian cities for Sunday. Although local officials did not authorize most of the events, thousands of people still took to the streets and over 1000 protesters were arrested in Moscow alone, according to anti-repression group OVD-Info. Most of them were released by Monday, with at least 120 people still in detention, the activists added.

Navalny was also detained while walking to the central event in Moscow. He appeared in court on Monday, pleading not guilty to organizing an unauthorized rally.

"I will not admit guilt," the 40-year-old opposition leader told the court. "People were unhappy about corruption, so they joined a peaceful demonstration," he added. The court ordered him to pay a fine of 20,000 rubles (around $350 dollars) and sentenced him to 15 days for resisting arrest. Navalny posted a selfie from the court, saying that "there will be time when we put them to trial (only then it would be fair)."

On Monday, Moscow rejected the calls to release the remaining detainees.

"We cannot agree to these appeals," the Kremlin spokesman Dmitry Peskov told reporters in Moscow, adding that protest rallies needed to comply with Russian laws. He denied the police was using too much force, saying their response was "highly professional and lawful." 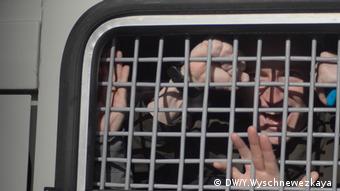 Peskov also accused the opposition of lying to protest participants, including to minors, by telling them that the protests were in fact legal.

He added that youths had been "promised financial rewards in the event of their detention by law enforcement agencies" during the protests. Peskov did not give a source for this information.

The Sunday rallies were the biggest since the 2011 demonstrations against Vladimir Putin's United Russia party.