Brussels has announced tougher rules to regulate the rapidly spanning field of artificial intelligence. Aspiring to catch up with China and the US, the EU hopes the regulation dispels myths surrounding the technology. 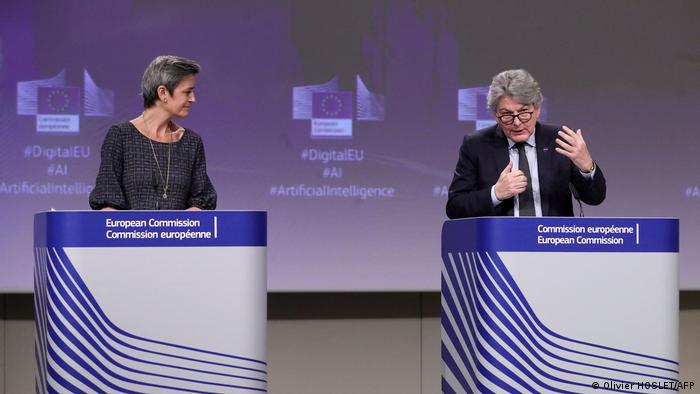 The European Commission on Wednesday unveiled a package of proposed regulations on the use of artificial intelligence that might threaten people's safety or rights.

The draft regulations impose checks on technology considered "high-risk" and include a ban on most surveillance and live facial scanning, as well as AI systems to filter out school, job or credit scoring.

"With these landmark rules, the EU is spearheading the development of new global norms to make sure AI can be trusted," EU competition chief Margrethe Vestager said in a statement.

"By setting the standards, we can pave the way to ethical technology worldwide and ensure that the EU remains competitive along the way," she said, adding: "There is no room for mass surveillance in our society."

EU officials see the rules as an attempt to set global standards for what it views as essential technology. They also hope they would dispel myths and misconceptions about AI so that the bloc can catch up with US and China in the rapidly expanding field.

Brussels said it would, however, impose an outright ban on government "social scoring" systems that judge people based on their behavior as well as applications that exploit children.

"It can be a case where a toy uses voice systems to manipulate a child into doing something dangerous," Vestager said. "Such uses have no place in Europe and therefore we propose to ban them."

There will be an exception for narrowly defined law enforcement purposes such as searching for a missing child or  preventing a terror attack.

Companies violating the rules face fines of up to 6% of their global turnover or €30 million ($36 million).

Christian Borggreen, vice president of the tech lobbying group CCIA, said the regulations should not create more red tape for companies and users.

AI "will be key for Europe's economic recovery and future competitiveness,"  Borggreen  said, but added that rules alone "will not make the EU a leader in AI."

Sarah Chander from the European Digital Rights network said the package "leaves a worrying gap for discriminatory and surveillance technologies used by governments and companies."

"The draft law does not prohibit the full extent of unacceptable uses of AI and, in particular, all forms of biometric mass surveillance," she warned.

The European Commission has been preparing the proposal for more than a year and a debate involving the European Parliament and 27 member states is expected to go on for months more before a definitive text is in force. The European Council must also review the draft rules, which could then be amended.