EU, UK 'like two hedgehogs who love each other,' says EU leader Juncker 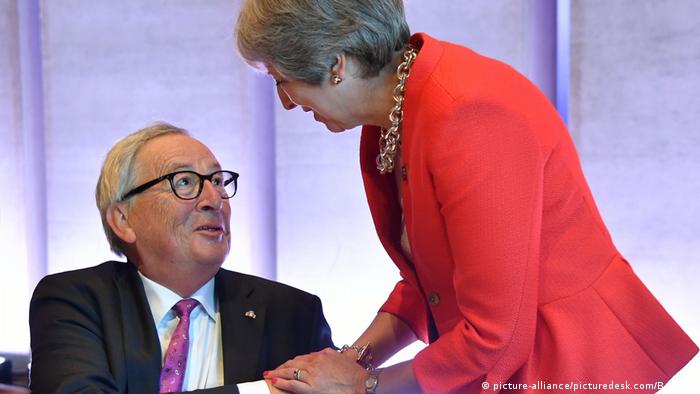 European Commission chief Jean-Claude Juncker tried to diffuse the tension between the EU and the UK after tough meetings in Austria led to fears that no Brexit deal could be reached. Juncker said on Friday that the negotiations for Britain's exit are beginning to resemble a prickly courtship.

"We have to be careful, like two hedgehogs who love each other," Juncker said. "When two hedgehogs embrace, they have to watch out that they don't get scratched.

"We're not at war with Britain," Juncker told the Austrian daily Die Presse, a day after British Prime Minister Theresa May's Brexit plan was largely rejected at an informal EU summit in Salzburg. May's proposal was seen as unworkable and unacceptable by the bloc's remaining 27 members.

Juncker cautioned that the situation between Britain and the EU should not be "overdramatized." Britain "will remain an important partner in trade and security for the EU," Juncker said.

EU Council President Donald Tusk called the UK's stance "surprisingly tough and in fact uncompromising," but "we decided that for the good of the negotiations, and out of respect for the efforts of PM May, we will treat the [UK government's ] Chequers plan as a step in the right direction.

"I remain convinced that a compromise, good for all, is still possible," he added.

'No deal is better than a bad deal'

British Prime Minister Theresa May, however, signaled her defiance at the EU leaders' rejection of her Brexit proposal.

"At this late stage of the negotiations, it is not acceptable to reject the other side's proposals without presenting alternatives," May said in a televised speech. "Throughout this process, I have treated the EU with nothing but respect. The UK expects the same. A good relationship at the end of this process depends on it."

She noted that she will not accept Northern Ireland remaining in the EU customs union while the rest of the UK would be out of it, saying "it would mean breaking up our country." The Irish border question is one of the most difficult issues in Brexit negotiations.

May also reiterated that "no deal is better than a bad deal."

Upon returning from the summit, May was met with criticism from several British newspapers.

"May humiliated," said London-based The Guardian newspaper, while Daily Mirror wrote "Your Brexit's broken." However, some newspapers and media outlets took aim at EU leaders.

The Sun, considered the UK's best-selling newspaper, wrote: "EU dirty rats — Euro mobsters ambush May." The headlines have highlighted the predicament May is in as she faces pressure at home — and from within her party — to deliver on Brexit.

It's a thankless task trying to keep up with the daily dose of bizarre comments made by leading Brexiteers. DW's Rob Mudge has made a valiant effort to wade through some of the madness. (20.09.2018)