Negotiators from the EU and Britain have worked out details of a future trade relationship for leaders to assess. German Chancellor Angela Merkel was cautiously optimistic about the state of the negotiations. 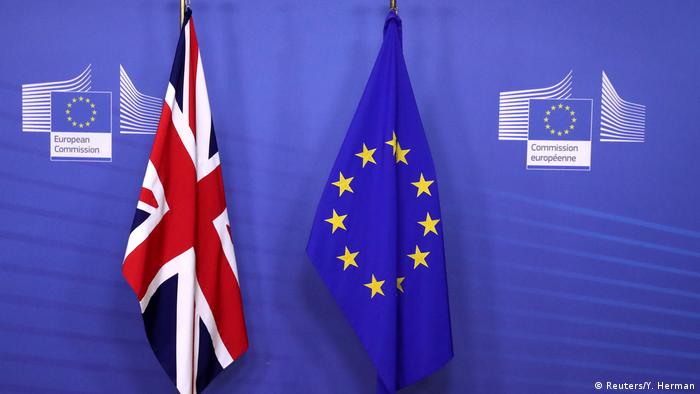 The EU and the UK have reached a deal on their post-Brexit relationship, European Council President Donald Tusk announced on Thursday. The text has been agreed to in principle by negotiators, but still requires the endorsement of the 27 remaining EU members.

"The Commission president has informed me that it has been agreed at negotiators' level and agreed in principle at the political level, subject to the endorsement of the leaders," said Tusk.

The document states the "parties envisage having a trading relationship on goods that is as close as possible, with a view to facilitating the ease of legitimate trade."

The draft on post-Brexit ties and an agreement on exactly how the UK will withdraw from the European Union will be discussed by EU leaders at a special summit on Sunday.

In a speech to Parliament, British Prime Minister Theresa May called the agreement "the right deal for the UK" and said negotiations were at a "critical moment."

"The draft text … honors the vote of the British people, by taking back control of our borders, our laws and our money, while protecting jobs, security and the integrity" of the UK, May told lawmakers. "In these crucial 72 hours ahead, I will do everything possible to deliver (this deal) for the British people."

The prime minister said the deal paved the way for a future trade agreement with the bloc, while also allowing for pacts with other countries. It will allow the rights of EU citizens in Britain to be protected, along with the rights of Britons in EU countries, and would avoid a hard border with Ireland, she added.

Read more: Migrants give UK a wide berth as other options abound

Opposition leader Jeremy Corbyn called the draft "26 pages of waffle" that "represents the worst of all worlds," and contains "no concessions" from the EU.

EU officials described the future partnership as "ambitious, broad, deep and flexible." But work is still ongoing to resolve issues on the status of Gibraltar and on fishing rights, European Commission spokesman Margaritis Schinas said.

In an update of the withdrawal agreement, both sides have agreed that the post-Brexit transition period may be extended from its current end date of December 31, 2020 "for up to one or two years."

Spain quickly threatened to nix the deal as it provides an unsatisfying future for Gibraltar in its eyes.

After a meeting with May on Thursday, Spanish Prime Minister Pedro Sanchez said on Twitter: "After my conversation with Theresa May, our positions remain far away. My government will always defend the interests of Spain. If there are no changes, we will veto Brexit."

Sanchez wants a guaranteed veto over the future status of Gibraltar.

Read more: Spain threatens to vote No on Brexit deal over Gibraltar

Merkel: Still a lot to discuss

German Chancellor Angela Merkel cautioned, however, that there was still a lot of discussion to be had before the final withdrawal agreement was settled.

"I will do anything to support reaching an agreement," Merkel said at a business summit in Berlin, with the caveat that "a disorderly exit would be the worst possible way both for the economy and the mental basis of our future relationship."

"We have come a long way, but it will certainly still require a lot of discussion, especially within Britain," she added.

Many observers have said it is unlikely the British Parliament will vote in favor of the Brexit 585-page deal May presented last week leaving open the question of how a no-deal Brexit would affect both the UK and the EU.

Read more:  Theresa May defends Brexit deal ahead of crucial week of talks

Austria's Kurz comes to aid May

May is also set to be with Austrian Chancellor Sebastian Kurz in London. Austria currently holds the rotating EU presidency, and Kurz told the Austria Press Agency that his visit is meant to help the prime minister bolster support for her deal and get a realistic idea of how strong support for it is.