Turkish Prime Minister Ahmet Davotoglu has accepted the EU's conditions on a deal to curb the influx of migrants to Europe. Read the latest from Brussels. 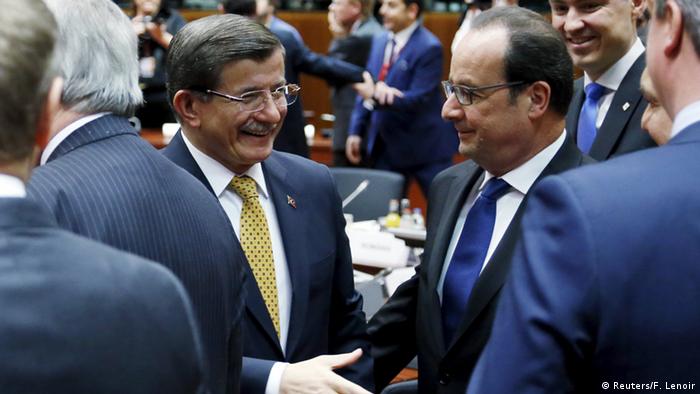 EU leaders have presented Turkish Prime Minister Ahmet Davotoglu with their concept of what a migrant deal should look like - and, according to the latest from Brussels, he has accepted their terms. Here's what you need to know about the deal.

-After lengthy negotiations on Thursday, EU leaders agreed on the conditions for the deal with Turkey
-The issues of visa liberalization and that of speeding up EU membership negotiations remained contentious. Both are key to Turkey, but were met with skepticism from various EU member states
-At an earlier summit 10 days ago, Turkey proposed to EU leaders that it would take back all migrants illegally arriving on European shores via the Aegean Sea
-In return, the EU is supposed to top up financial assistance to Turkey by an additional 3 billion euros ($3.33 billion)
-Also, for every Syrian refugee returned to Turkey, the EU would take in one Syrian refugee from a Turkish camp

For the latest from Brussels, follow our live summit blog below.

Film star and UNHCR goodwill ambassador Angelina Jolie has traveled to Greece to bring attention to the plight of thousands of refugees crowded in camps. Meanwhile, rescue efforts have continued in the Mediterranean. (17.03.2016)