EU summit: No firm timeline for Western Balkans accession | Europe | News and current affairs from around the continent | DW | 06.10.2021 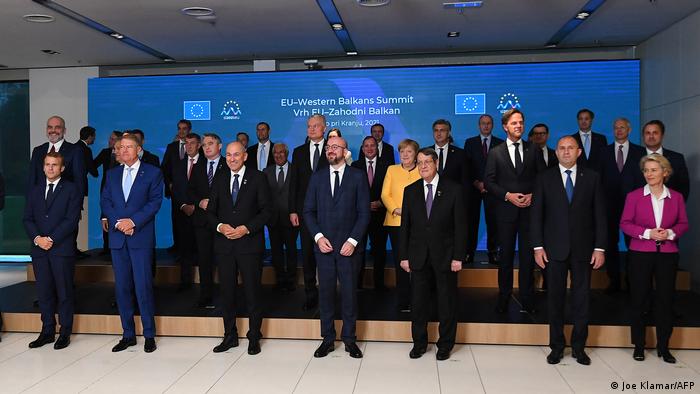 EU and Western Balkan leaders have wrapped up a one-day summit in Brdo Castle in Slovenia with promises for greater integration but didn't commit to a solid timeline for the six countries to join the 27-member bloc.

"The Western Balkans are part of the same Europe as the European Union. The EU is not complete without them," EU Commission President Ursula von der Leyen said. "My commission will do its utmost to advance the accession process."

But the EU's executive arm, her Commission, is paralyzed by leaders of the EU's national governments, all of whom possess a veto option on opening negotiations.

"In all frankness, there is discussion among the 27 about our capacity to take in new members," said EU Council President Charles Michel, who chairs the meetings of EU leaders.

The EU did agree to create a new €9 billion economic and investment plan for the six Western Balkan countries.

Recent focus remains on Albania and North Macedonia which have met reform demands from the EU and are expecting to be invited to a formal conference to launch their accession negotiations.

The process for the two is what the bloc calls "coupled." 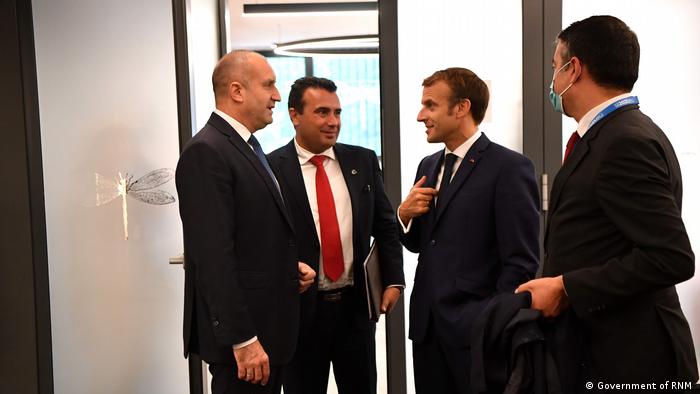 Bulgaria is exercising its veto over a longstanding dispute with North Macedonia about culture and language.

After the summit, North Macedonia's prime minister, Zoran Zaev, said that if EU promises don't materialize, "people in the Western Balkans will feel big disappointment that will create huge damage to the European idea of unity and cooperation.'' His position has support within the EU.

Dutch Prime Minister Mark Rutte said, "I pleaded with the Bulgarian president to deblock the situation with North Macedonia."

The dispute with North Macedonia is unlikely to be resolved until a government can be formed in Sofia.

It remains a crucial election issue with Bulgarians, who are soon heading back to vote for the third time this year after two prior attempts failed to produce a clear winner.

The presidents and prime ministers of Serbia, Montenegro, Kosovo and Bosnia and Herzegovina were also all present for the summit – the countries are all at different stages of EU accession. Angela Merkel pleaded against a firm timeline for now

The EU demands stringent reforms on justice, press freedom and the fights against corruption and organized crime.

France is also reluctant for the EU to grow in number, with Brussels already accusing member states like Poland and Hungary of breaching democratic values.

Ahead of the meeting, Albanian Prime Minister Edi Rama blamed the EU's internal fights for the holdup in talks.

"We have learned the hard way not to expect anything" Rama told Albanian press. "Europe is not in a very good moment, with many internal problems, enlargement is not received with enthusiasm."

One breakthrough at the summit in Slovenia was the fact that Spanish Prime Minister Pedro Sanchez was present.

He is the first to sit at the table of an EU-Western Balkan summit since Kosovo declared independence from Serbia in 2008.

EU member states Slovakia, Romania, Greece, Cyprus and Spain do not recognize Kosovo as an independent country. Spain doesn't want to legitimize separatist movements as it battles with a breakaway attempt of its own, in Catalonia.

Heightened tensions on the Serbia-Kosovo border over a fight about car license plates were cooled following EU-mediated discussion. But experts warn the EU still has a huge credibility issues in the Western Balkans on this issue.

Majda Ruge, a senior policy fellow at the European Council on Foreign Relations (ECFR) told DW that the EU's reluctance to criticize Serbia is becoming a big problem.

"The EU is simply not using its leverage in Belgrade properly," she said. "Serbia is flexing its military muscle in the region and implicitly threatening its neighbors. For Kosovo, strong statements against this would be much more important even than recognition from the five countries in the EU.”

European Commission President Ursula von der Leyen was also forced to defend her staff at the summit. A report from news and current affairs portal Politico claims EU Enlargement Commissioner Oliver Varhelyi from Hungary has been watering down judicial and democratic demands on Serbia during its accession process.

But von der Leyen insisted that "all commissioners have my full confidence."