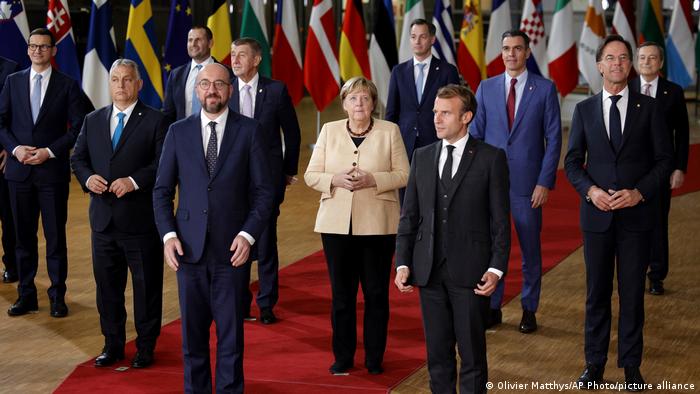 Polish Prime Minister Mateusz Morawiecki hit back at the EU's criticism of Warsaw, reiterating he would not bow to "blackmail" while leaving the door slightly ajar for "dialogue" as he joined a summit of the bloc's 27 member states on Thursday.

Poland was heavily criticized at the meeting over its decision to challenge "the legal bedrock of our Union," European Parliament President David Sassoli said, adding "never before has the Union been called into question so radically."

But this drew a sharp response from Morawiecki, who was keen to preserve Polish sovereignty, as he said: "Some European institutions assume the right to decide on matters that have not been assigned to them."

"We will not act under the pressure of blackmail... but we will of course talk about how to resolve the current disputes in dialogue."

What is the division about?

The ruling brings to a head differences between Poland and the bloc over several principles of democracy, such as judicial independence, freedom of media, women's rights, migrants and the rights of LGBTQ people.

Poland gets Hungary support, while others lash out

A common Polish ally at Thursday's meeting emerged in the shape of Hungary.

Hungarian Prime Minister Viktor Orban wants to return powers to national capitals and has lashed out at what it believes are excessive powers of the European Commission.

"Poland is one of the best European countries. There is no need for any sanctions, it's ridiculous," Orban said.

The European Commission has, for the time being, barred Poland from accessing the €36 billion ($42 billion) of grants and loans it requested from EU funds to help its economy bounce back from the coronavirus pandemic.

"If you want to have the advantages of being in a club... then you need to respect the rules," Belgian Prime Minister Alexander de Croo said. "You can't be a member of a club and say 'The rules don't apply to me'."

Leaders of  a number of EU countries, including Ireland and France, urged Poland to come back in line.

Dutch Prime Minister Mark Rutte, referring to Warsaw's judicial overhaul that puts its courts under more government control, said it was difficult to see how new EU funding could be channeled to Poland. "We have to be tough," he said.

"We have to find ways of coming back together," she said, adding that bringing multiple cases against Poland to the Court of Justice of the European Union was no solution.

Morawiecki has dismissed the idea of following in the footsteps of the UK by leaving the bloc, ruling out the possibility of a "Polexit."

Support for EU membership remains high in Poland, with some 88% of Poles keen to remain in the 27-member bloc.

The European Parliament has adopted a report slamming China's "military belligerence" and calling for closer relations with Taiwan, triggering "strong condemnation" from Beijing.