Poles have gathered in cities across the country to demonstrate their support for the European Union. The rally comes after Poland's constitutional court ruled that Polish laws take precedence over EU ones. 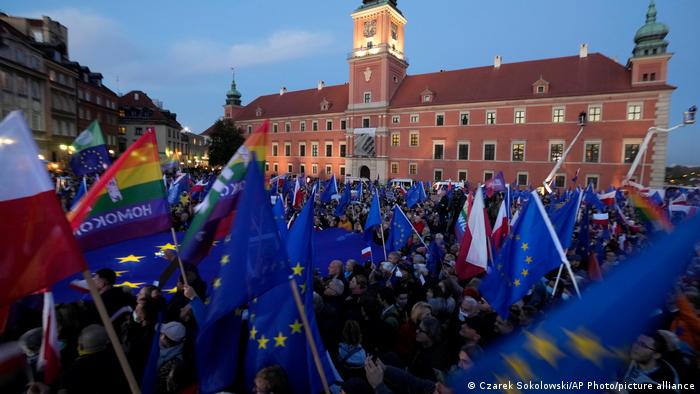 Crowds gathered in major cities across Poland — including Warsaw, Krakow and Poznan — on Sunday to show support for the country's membership of the EU.

Demonstrators gathered in Warsaw's Castle Square waving Polish and EU flags. They sang the national anthem and chanted "We stay" and "We are Europe!"

The rallies come after a top court ruling that said the Polish constitution overrides some EU laws. Critics of Poland's conservative ruling party PiS say the court is stacked with its allies and is therefore illegitimate. They worry the latest ruling could lead to Poland's exit from the EU.

DW correspondent Jack Parrock said protesters at the rally were sending a clear message that they want to stay in the EU, many told Parrock they worried their children would grow up outside of the bloc.

"Back in 2003 when Poland signed the EU treaties to join the EU on this very square there were similar scenes, EU flags being flown, but back then there was jubilation, this time there is a concern and the demand that the government turns its back on this suggestion and this campaign to try and keep the polish constitution above certain parts of EU law," Parrock said.

Why are Europhile Poles so concerned?

Poland's PiS has been at odds with Brussels for six years, especially after a series of judicial reforms were passed, which led the European Commission to open several infringement proceedings against Warsaw.

The judicial reforms were debated at the European Court of Justice, which ruled in March that the new regulations for appointing Supreme Court justices could violate EU law, ordering the right-wing government to suspend them.

But Poland's top court rejected the notion, by ruling this week that several articles in the EU treaties were "incompatible" with the country's constitution and saying that EU institutions should not "act beyond the scope of their competences" by interfering with Poland's judicial reforms.

Since the primacy of EU law is a requirement for membership, pro-Brussels Poles fear that the court's decision might push the country to have to choose whether to give up EU membership — or even face expulsion.

The country's top opposition leader Donald Tusk attended Sunday's protests and called for Poles to rally in defense of Poland's continued membership of the 27-member bloc.

"Poland's place is in Europe," he said. "We will win because we are the majority."

The standoff over migrants entering the EU between Minsk and Warsaw has hit local Polish businesses near the border, many reliant on tourism. With the winter coming and no end in sight to the crisis, DW visited the area.