Poland has summoned a Belarusian official after border forces said they had been fired at. The allegations represent an escalation of tension at the already tense border. 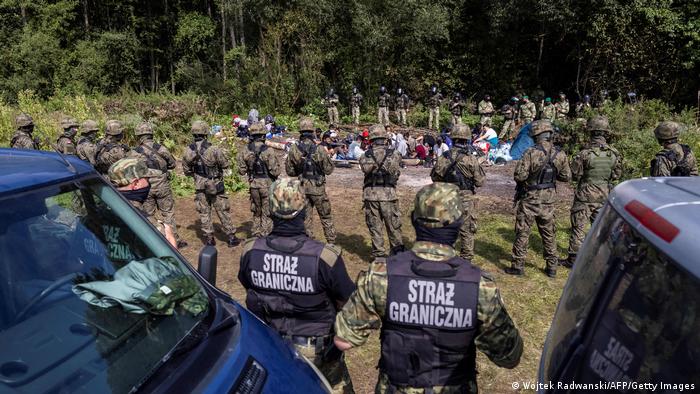 Poland alleges that Belarus, angered by European sanctions, is intentionally sending migrants across their shared border as a kind of blackmail

The Polish government summoned Belarus' charge d'affaires on Friday after it accused the border force in Belarus of firing towards Polish soldiers, a Foreign Ministry spokesperson said.

Warsaw declared a state of emergency at its eastern border in August as large numbers of migrants began to enter the country from the Belarus side. Brussels has said Minsk is trying to use migrants to put pressure on the EU over sanctions.

"A Belarusian patrol fired shots at Polish Army soldiers who are patrolling the border with us," the state-run PAP news agency quoted Border Guard spokeswoman Anna Michalska as saying.

"It was probably using blank ammunition. Nothing happened to anyone," she said.

Lukasz Jasina, Poland's Foreign Ministry spokesperson, said that Belarus's charge d'affaires Aleksandr Czasnouski had been summoned over the "provocations" at the border.

But Czasnouski rejected claims that shots had been fired across the border while leaving the ministry.

Why is there tension at the Belarus-Poland border?

Poland declaring a state of emergency at the border blocks journalists or human rights observers from being present.

At least five people have died while stuck as Polish soldiers refuse to let them through. The EU has also criticized Poland's handling of the situation, saying that authorities need to make sure that border security "should not come at the expense of life."

Tensions at the frontier have been growing since Minsk began to allegedly fly migrants, mostly from Iraq and Afghanistan, into Belarus and then move them onto neighboring EU countries: Poland, Latvia and Lithuania.

These bloc members have responded by sending military forces to control the border and erecting fences.

The move from Belarus comes in response to sanctions imposed by the EU following the crackdown against anti-government protesters who challenged the election results in late 2020, seen by many countries as fraudulent, which let long-term ruler Aleksander Lukashenko remain in power.