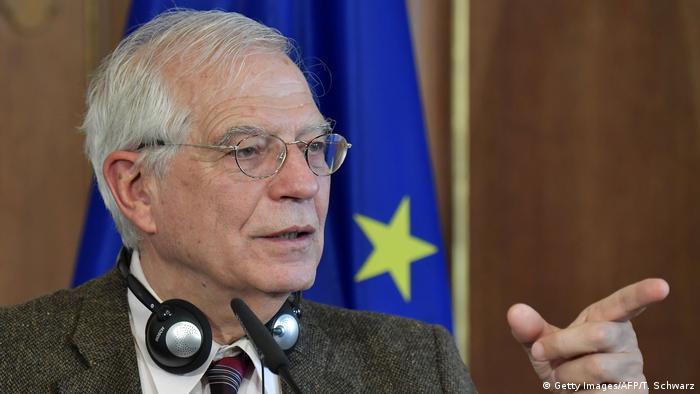 The European Union slammed US President Donald Trump's Middle East peace plan on Tuesday, arguing that it "departs from" international agreements on the Israel-Palestine conflict.

Last week, US President Donald Trump presented a proposal to address the conflict. The plan, which Trump dubbed the "deal of the century," would give Israel control over Jewish settlements on the West Bank and Jordan Valley, while also calling for a Palestinian state. It was rejected by Palestinian leadership both pior to and after its unveiling.

In a statement, EU foreign policy chief Josep Borrell said that the plan does not adhere to "internationally agreed parameters."

"To build a just and lasting peace, the unresolved final status issues must be decided through direct negotiations between both parties," he said, urging both sides to "re-engage and to refrain from any unilateral actions contrary to international law."

On settlements, "steps towards annexation, if implemented, could not pass unchallenged," read the statement. "We are especially concerned by statements on the prospect of annexcation of the Jordan Valley and other parts of the West Bank."

The response, however, triggered an angry response from Israel, which backs the plan.

"The fact that the High Rep of the EU, Josep Borrell, chose to use threatening language towards Israel, so shortly after he assumed office and only hours after his meetings in Iran, is regrettable &, to say the least, odd," tweeted Israeli Foreign Ministry spokesman Lior Haiat.

"Pursuing such policies and conduct is the best way to ensure that the EU's role in any process will be minimized," Haiat wrote.

Trump's plan, which was welcomed by Israeli Prime Minister Benjamin Netanyahu, was dismissed by Palestinian President Mahmoud Abbas as "nonsense." No Palestinian representatives were present for the announcement of the plan.

Palestinian demands include regaining control over all of the West Bank and East Jerusalem, which were captured by Israel in the 1967 Six Day War. They are also calling for an independent state and the removal of more thann 700,000 Israeli settlers from those areas.

The EU, which often issues slow responses due to the requirement for unanimity among its 27 member states, stated last week that it would study Trump's plan before issuing an official verdict.