In the spat over the next European Commission president, Social Democrat candidate Martin Schulz has said he favors his main rival in last month's election, Jean-Claude Juncker. Britain's David Cameron does not. 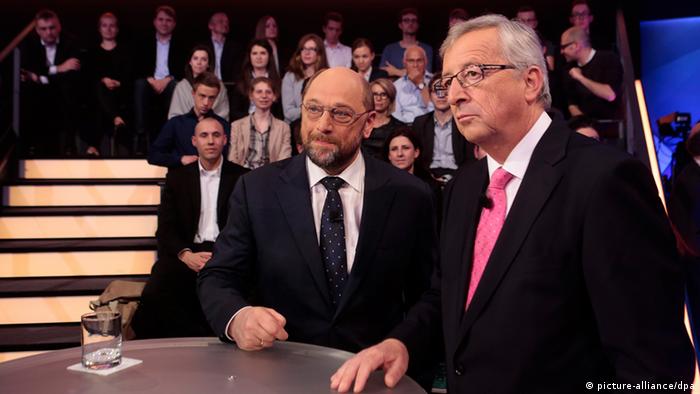 Martin Schulz told the online portal of Der Spiegel on Wednesday that his election rival Jean-Claude Juncker should take up the job of European Commission president. Juncker was the nominated candidate of the center-right European People's Party (EPP) alliance in last month's European Parliament elections. The EPP won the most votes, 28.5 percent of the total, but some European leaders have called for an alternative choice.

"The conflict in Ukraine, the high unemployment in several countries and the improved performance from extremists at the European elections must be a wake-up call for all democrats," Schulz told Spiegel Online. "We need a broad coalition to master these challenges and win back lost trust."

The Social Democrat from the European Parliament's center-left Socialists and Democrats (S+D) coalition said he believed Juncker could command a majority coalition.

"Many Social Democrats, conservatives and others are ready to voice their trust in a new European Commission led by Jean-Claude Juncker, provided they set about this task wholeheartedly and thus strengthen Europe and her member states," Schulz said.

A report also carried in Der Spiegel this week, citing EU sources, said Cameron had threatened to bring forward an "in/out" referendum on UK membership in the EU if Juncker were nominated Commission president. Cameron had previously pledged the vote for 2017, provided he could win re-election in 2015.

"This is not the time for party politics. The election is over," Schulz said. "Now is the time to do what's necessary, so that we can protect peace and prosperity on our continent and gain new strength."

Schulz's S+D alliance emerged as the second strongest after the EPP in the European elections, also logging improved returns over their 2009 resutls.

German Chancellor Angela Merkel, whose Christian Democrats are part of the EPP bloc, did not immediately throw her support behind Juncker after last weekend's difficult elections. Last Friday, however, Merkel said she was "conducting all negotiations in the spirit that Jean-Claude Juncker ought to become European Commission president."

"It's absurd, that after more than a week we are still seriously discussing whether an election winner should be allowed to take over the office he fought for," SPD whip Thomas Oppermann told Tuesday's Frankfurter Rundschau.

Merkel's spokesman Steffen Seibert on Tuesday dismissed a report carried by news agency Reuters. The report suggested that Merkel had sounded out the availability of International Monetary Fund chief Christine Lagarde for the presidency: "The report is wrong. What the chancellor said publicly yesterday still stands," Seibert said.

One of the efforts to provide European elections with a "face" this year involved major parties nominating lead candidates to succeed Jose Manuel Barroso as Commission president. However, to be elected to the post, any candidate also requires majority approval both from the EU's 28 heads of government and from its parliamentarians.

The system change stopped a long-running negative trend on voter turnout, but only just: participation rose from 43.0 percent in 2009 to 43.1 percent last month.