The Mediterranean is highly vulnerable to climate change and its response capabilities are "being stretched to the limit" said representatives of nine EU countries at the Athens summit. 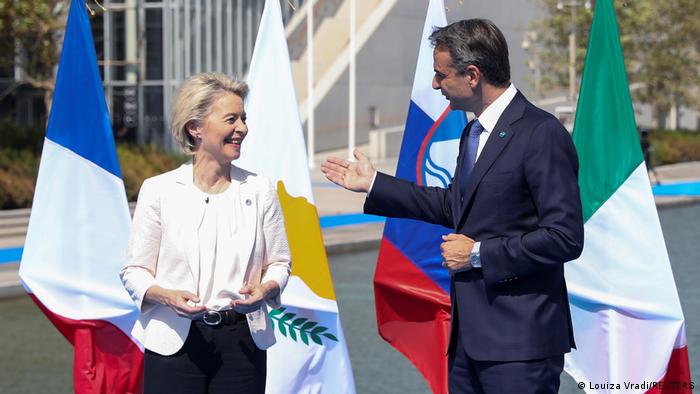 Southern EU states called for "urgent and ambitious global action" to tackle climate change at a one-day summit in Athens on Friday.

In a joint statement, the delegates acknowledged that "the Mediterranean is highly vulnerable to the impacts of climate change" and is already suffering "unprecedented ecological damage and response capabilities are being stretched to the limit."

Dealing with aftermath of wildfires

The appeal comes as forest fires recently devastated large swathes of Greece and Italy, with other countries also affected.

Mitsotakis has faced harsh criticism from the public on his government's response to the weeks-long crisis, and was forced to apologize and fire two of his cabinet members last month. The prime minister has pointed to climate change as the culprit.

In the wake of the destructive wildfires, Greece also formed a new ministry for climate change, with the authorities promising to make it a policy priority.

No mention of migration, Turkey

The statement, issued after the talks got underway, makes no mention of the other topic that was also expected to be high on the agenda — illegal immigration.

The summit was held  amid fears that the Taliban takeover of Afghanistan will send another wave of refugees towards the EU shores.

The EU countries in the Mediterranean region found themselves bearing the brunt of the 2015 migrant crisis due to their relative proximity to Africa and the Middle East.

Refugees from war-torn Syria and other Middle Eastern and African countries still attempt to sail to Greek and Italian islands, or enter Slovenian and Croatian territory on foot after traversing the so-called Balkan route.

The statement also did not comment on Greece's open disputes with Turkey, a key partner in curbing illegal migration which nevertheless clashes with Athens over Cyprus and in the matters of energy exploration in the Mediterranean.

The loose alliance of Mediterranean countries, known as Med7, was created almost ten years ago by Cyprus, France, Portugal, Greece, Italy, Malta and Spain, with  Adriatic states Croatia and Slovenia joining the meeting for the first time this year.