Less than two weeks after forest fires ravaged the northern part of Evia, firefighters are now battling another blaze in the southern part of the island. 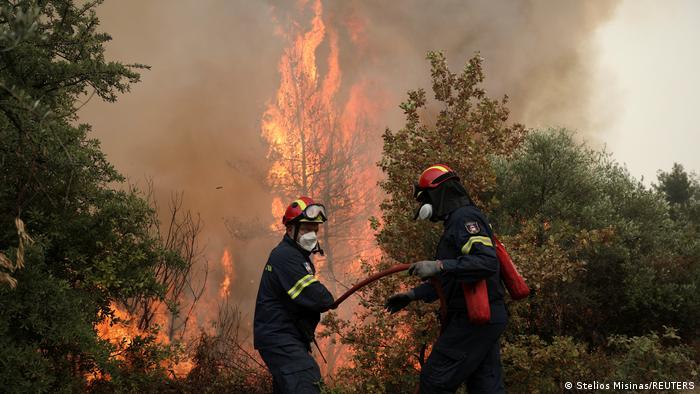 Greece's fire department sent firefighters and aircraft to respond to a blaze that broke out on the country's second-largest island, Evia, early Monday.

The country was scorched by several wildfires earlier this month amid its most severe heat wave in decades.

The northeastern island of Evia was particularly hard-hit, with a major wildfire burning for more than 10 days in Evia's north.

What we know about the fire:

Fanned by strong winds, Monday's fire broke out on the southern part of Evia.

Authorities in the village of Fygia, near the fire, have evacuated two neighborhoods.

The blaze was moving toward the coastal tourist village of Marmari. The Athens News Agency reported that Marmari authorities have boats on standby to evacuate people if needed.

The fire was contained after several hours, the fire department said.

New fire in north of Athens

A new forest fire started on Monday in the area of Vilia, 60 kilometers (37 miles) northwest of Athens, nearby where a six-day blaze was finally controlled on Saturday.

Greek and Romanian firefighters struggled to control the flames with the help of six helicopters and five water-dumping planes.

Civil defense authorities ordered a number of villages be evacuated including Vilia itself.

The new blaze was one of 34 new wildfires reported between Sunday and Monday, said the Greek fire brigade, that has now put most of them under control.

"The battle against the fires continues wherever there is a front," government spokesman Yiannis Oikonomou said on Monday.

"We have already started repairing damage and providing practical support to those affected," he added.

A heat wave turned into inferno

August began with Greece's most severe heat wave in decades and turned into one of the country's most destructive fire seasons.

The fires forced thousands of people to flee as forests, agricultural land, homes and businesses burned.

Greece's fire capabilities have been stretched to the limit, and the government, which appealed for international help, has received sharp criticism for its response.

Although the government has blamed the disaster on the heat wave, Citizens Protection Minister Michalis Chrisochoidis announced that a special prosecutor for organized crime cases was involved in a probe into the causes of the fires.

Authorities have already arrested a dozen people, including a 14-year-old boy, on suspicion of arson.