On a day they hoped would never come, EU leaders reminded departing Britain it has to play by the rules until its exit from the bloc is final. The Brexit process is expected to be an acrimonious 24 months.

Brussels is taking the divorce hard and wants to make sure Britain doesn't have it easy either. Holding the official letter from British Prime Minister Theresa May aloft on Wednesday, European Council President Donald Tusk was emotional.

"There is no reason to pretend that this is a happy day, neither in Brussels, nor in London," Tusk told a briefing of reporters shortly after the document was delivered by British Ambassador Sir Tim Farrow. "After all, most Europeans - including almost half of British voters - wish that we would stay together, not drift apart. As for me I will not pretend that I am happy today."

"It's the first time that a member state has decided to leave us," lamented European Parliament President Antonio Tajani. "Although we fully respect the democratic will of the majority of the British people, today is not a good day for Europe."

Tracking events from Washington, Nile Gardiner, of the conservative Heritage Foundation think tank, dismisses all the angst. A former aide to the late British Prime Minister Margaret Thatcher, Gardiner has long been an enthusiastic Brexit supporter. "For the ruling Brussels elite, the idea that millions of people would reject the European Union is impossible to fathom, let alone accept," he told DW.

But while "Brexit has been met with horror in most European capitals," Gardiner says in Donald Trump's Washington, it's a welcome development among many conservatives. "Both in the White House and on Capitol Hill, Britain's departure from the EU is seen as a tremendous opportunity. The days of active US backing for the European Project are coming to an end."

German Foreign Minister Sigmar Gabriel was among the European leaders who weighed in, saying he accepts there may be hard feelings on both sides in the near term. "For many, it may still be hard today to understand how anyone could believe themselves better off standing alone in these uncertain global times," Gabriel said in a statement heavy with political undertones. "However, all this must not be what our future relations will be built on. Although it may sound like a hollow phrase, particularly when two individuals separate, 'Let's still be friends' is the right thing to say in this situation."

The European Parliament's Brexit negotiator Guy Verhofstadt made little effort to sound friendly with the British government, calling the break an "unprecedented and regrettable" event.  It's the citizens of the other 27 member states he's worried about, Verhofstadt says. He and European Parliament President Tajani presented a resolution outlining their expectations for the two-year negotiation period produced by presidents of the EP's four major political groups and the Constitutional Affairs Committee.

Verhofstadt calls it "citizens first," underscoring the need for "reciprocity and non-discrimination" between people, regardless of whether they live in the UK or the EU. "For us, it is an absolute priority to settle citizens' rights as soon as possible," he insisted. "It needs to be the first issue to be tackled in the negotiations." 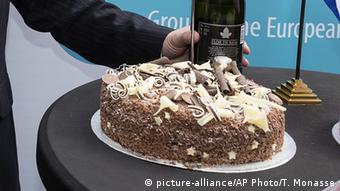 While the resolution, which will be debated and voted on next Wednesday, is non-binding, EP leaders remind London their approval is needed before the UK's eventual exit deal is final. Until then, Tajani and Verhofstadt stressed, Britain must continue to behave as an EU member and not seek to set up its new arrangements - trade agreements in particular - outside the bloc. Verhofstadt stressed the need for the remaining 27 members to stay united.

Gardiner isn't so sure that's going to be possible. "If Brexit is a success, and all the indicators are that it will be, other EU member states will begin to consider the alternatives to EU membership," he predicted. "What the EU elites fear most is a wave of referendums across Europe that could shatter the illusion of European unity."

Communications strategist Stavros Papagianneas believes there is a way for the bloc to turn this dark day around, but it will take serious work. "What the union has to do - and this is a difficult one - is to send out a message of unity and recovery, to show that it's coming out of the crisis," Papagianneas said. A former communications officer at the European Commission who's now written a book called "Rebranding Europe", he said the EU institutions have been too slow to react and not creative enough in their efforts to show local populations why the bloc is relevant and beneficial.

"There should be a kind of innovative and sustainable public-private partnership committed to presenting the European Union as a useful brand," he suggested, "seeking to collaborate with the citizens and make a meaningful difference in their daily lives."

The case for cohesion

Brexit should have been a "huge wake-up call" as to the risks of not communicating better and immediately, Papagianneas believes, warning that "if that's not clear to EU leaders now, I think they haven't understood what is happening here." It's so ominous that a Soviet Union-style break-up could be in the cards, he added.

President Tusk might first need to snap out of his mourning period. While declaring that Brexit has made the bloc-minus-Britain "more determined and more united than before," he also ended his press conference wistfully, longing for London's lost love: "What can I add to this? We already miss you."