With the UK noticeably absent, European Union leaders have met in Rome to celebrate the founding treaties of the bloc. Amid trouble and uncertainty, they sought to portray a united Europe.

EU leaders gathered in Rome on Saturday to mark the 60th anniversary of the bloc's founding treaties against the backdrop of a series of crises that have challenged European unity.

Leaders from 27 member states declared "Europe is our common future" in a final declaration signed at the Campidoglio palace, where on March 25, 1957, six founding states signed the Treaty of Rome paving the way for today's EU. 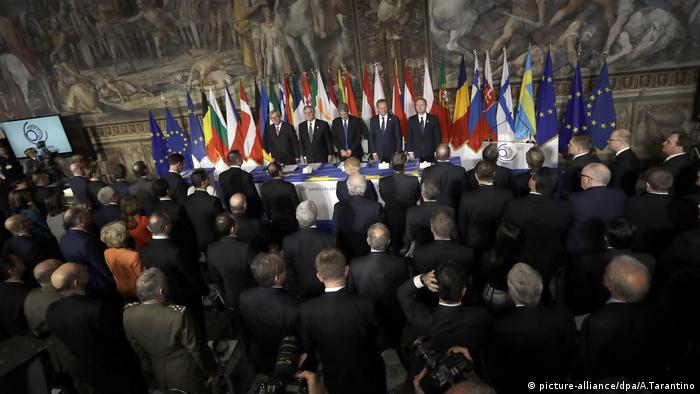 Noticeably absent was British Prime Minister Theresa May, who on Wednesday is set to officially start a two-year Brexit process for the bloc's second-biggest economy.

Amid the symbolism and show of unity in Rome, European Commission President Jean-Claude Juncker said Britain's departure was a "tragedy" for the other 27 member states.

Britain's imminent departure has shaken the EU's confidence and left the bloc searching for new answers to a host of challenges. A migration crisis, eurozone debt crisis and terrorism have sown disunity and paralysis in EU decision-making and given rise to euroskeptic populists.

The document signed in Rome sets a new course for the EU, laying out the principle of a multi-speed bloc wherein some countries move ahead on stronger integration while others may not participate on certain issues.

"We will act together, at different paces and intensity where necessary, while moving in the same direction," the declaration states.

France and Germany have pushed to overcome internal bickering. Led by Poland, some countries have protested the idea over concern it would leave central and eastern members behind.

"A multi-speed Europe doesn't mean in anyway a disunited Europe," German Chancellor Angela Merkel said. "We are very clear: we want to head in the same direction and there are things that are nonnegotiable," she said, counting among them the internal market and western values on freedom of expression, press and religion.

As thousands of leftist and nationalist anti-EU protesters rallied in Rome, leaders also highlighted that Brussels needs to address citizens' economic concerns and not become bogged down in bureaucratic details that have caused a backlash.

"Europe as a political entity will either be united, or will not be at all ... The unity of Europe is not a bureaucratic model. It is a set of common values and democratic standards," European Council President Donald Tusk said.

Merkel said that the EU wanted to respond to citizen's concerns over the economy, immigration and military threats with "a protective Europe."

"We want a secure and protected Europe. We must better protect our external borders and we want an economically stronger Europe," she said.

Italian Prime Minister Paolo Gentiloni said development had stalled and the EU has failed to address economic concerns that have fueled nationalism. "Unfortunately, we stopped," he said, and "it triggered a crisis of rejection." He added, "We must restore the trust of our citizens" by creating jobs and erasing social inequality.