As Britain prepares to start its formal divorce from the EU, pro-European demonstrators have gathered in London. The rally went ahead amid tight security following Wednesday's deadly terror attack on Westminster.

Several thousand people gathered for Saturday's Unite for Europe protest, which began at London's exclusive Park Lane next to Hyde Park before marching to Parliament.

The rally took place just four days before British Prime Minister Theresa May was due to trigger Article 50 of the EU's Lisbon Treaty, and begin the process of Britain leaving the bloc.

Thousands of people waved pro-EU banners with slogans that included "So what's the Plan" and "Stop Brexit."

Another simply said "Happy Birthday EU" in a reference to this weekend's 60th anniversary of the bloc's founding, which is currently being commemorated in Rome.

Several demonstrators tweeted photos of the rally, with one insisting, "We are not a bargaining chip," in reference to uncertainty over the rights of EU nationals in Britain and British nationals in the EU following Brexit.

'Not the people's will'

One protester told the Reuters news agency that Britain's referendum last June, where the public voted 52-48 percent to leave the EU, was too close to call a real political mandate.

"With such a close vote, I don't see how anyone can call this the will of the people," Joss Dennis, who had traveled from Bristol in western England, said. "We have so much to lose: environmentally, politically and financially." 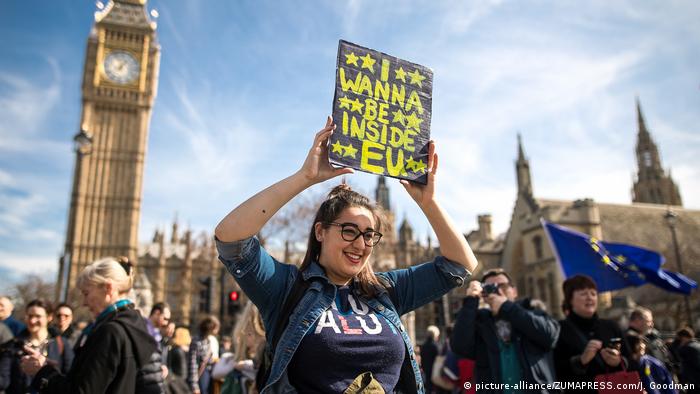 "As the Article 50 negotiations take place, I think quickly people will start to realize, 'This is not what we voted for,'" Campbell told DW News.

"As well as so-called 'remainers,' there are also people here who voted for Brexit, but they want a Brexit that will keep ties with Europe alive, not the kind of Brexit that seems to be on the cards."

Protesters moved from Park Lane to Parliament Square, scene of this week's terror attack in which four people died. The march went ahead despite security concerns, and additional police officers were put in place.

"We will not be intimidated," organizers said in a statement. "We will stand in unity and solidarity."

Marchers observed a minute's silence in memory of the victims of British-born Islam convert Khalid Masood at the start of the demonstration. Several protesters carried yellow flowers that they laid at the memorial for the victims of the atrocity.

On Wednesday, Masood had plowed into pedestrians on London's Westminster Bridge before stabbing a police officer outside parliament.

The Brexit vote has caused a deep schism within British politics, but May is determined to press ahead with plans to quit the EU.

London's protest was one of several being held around Europe, including the German capital, Berlin, in support of the EU and European values.