EU leaders struggle to find unity on COVID travel measures | Europe | News and current affairs from around the continent | DW | 16.12.2021 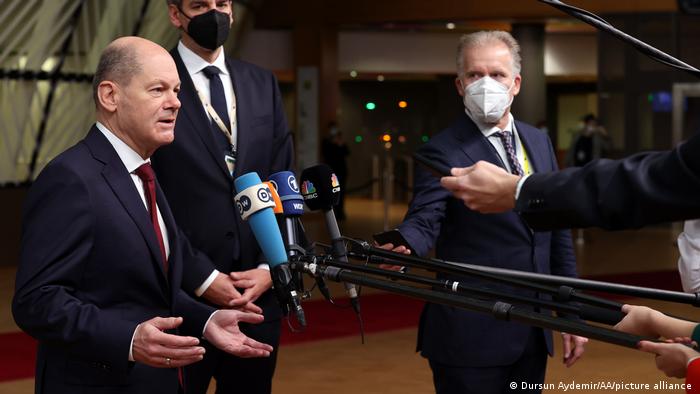 The summit was the first for Germany's new chancellor, Olaf Scholz

The 27 leaders of the European Union have struggled to find a common position on travel restrictions and additional measures to prevent the spread of the omicron variant of COVID-19.

Following a summit in Brussels, they released a statement saying that any new restrictions should be "based on objective criteria and not undermine the functioning of the Single Market or disproportionately hamper free movement between EU member states."

It comes after Italy followed Portugal and Ireland in reimposing rules that insist anyone arriving in their countries must show a negative coronavirus test, and not only proof of vaccination.

The EU leaders also said they want a "speedy adoption" of plans to limit the validity of the European digital vaccine certificate, also know as the EU Green Pass, to nine months for the first two doses, unless a person receives a booster shot.

The statement said the European Commission "will adopt a delegated act on this issue," but did not specify when that might happen.

ECDC: Vaccines not enough against omicron

The summit ended as alarm bells about the severity of the omicron variant were being rung by the EU's own scientific experts.

On Wednesday, the European Center for Disease Prevention and Control (ECDC)  released a warning saying "evidence to date raises concern that the Omicron VOC [variant] may be associated with a significant reduction in vaccine effectiveness."

Why so many breakthrough infections?

The ECDC has insisted that vaccines are not enough against omicron, and has backed the reintroduction of measures like restrictions on group gatherings and masks mandates. It has also warned that health systems are likely to see increased pressure.

"Immediate planning should be considered to increase healthcare capacity to treat the expected higher number of cases," said the ECDC.

Experts in Germany are warning the omicron variant is now unstoppable and could cause hundreds of thousands of new infections every day.

No conclusions on energy

The summit lasted longer than it might have as EU countries battled over whether they would publish plans for defining energy sources as part of the EU's plan to green its economies.

A number of anti-nuclear countries like Germany, Austria and Luxembourg are fighting for nuclear power not to be classified as "green."

It meant that EU leaders were unable to release any statement relating to what is known as the bloc's "taxonomy" — the process of defining what is classed as green energy and what isn't.

France, a nuclear-reliant nation, is pushing for it to be considered a sustainable energy source in the EU.

"The divergences around the table meant that we couldn't agree on conclusions. We'll come back to this," said EU Council President Michel after the summit.

In a show of Franco-German unity, German Chancellor Olaf Scholz held a joint press conference with French President Emmanuel Macron after the summit.

But the two leaders couldn't shy away from the fact that they sit on opposite sides of this argument.

"The perspectives are slightly different with regard to the path that both our countries intend to pursue," said Scholz. "It's been a long while that Germany took the decision that nuclear energy will not play a part for us in the energy transition."

Around 70% of France's electricity is produced by nuclear power plants.

The Brussels summit was the first for Germany's new chancellor, Scholz, after 16 years of Angela Merkel attending these meetings.

With EU-Russia relations a key agenda issue, Scholz knew there would be pressure on him to explain his government's position around the NordStream 2 pipeline project, which is due to bring Russian natural gas into Germany through the Baltic Sea.

Estonian Prime Minister Kaja Kallas made her feelings clear on the way into the meeting, saying "NordStream has always been a geopolitical project and I hope the German authorities will not let it proceed."

But some of the pressure on Scholz was alleviated in the hours just ahead of the summit when the head German energy regulator BNetzA announced a six-month delay in certification process for the pipeline.

"There will be no decisions on this issue in the first half of the year [2022]," said President Jochen Homann.

Pieter Cleppe, editor-in-chief of BrusselsReport.eu, told DW the delay gives the new chancellor some breathing space on a difficult issue.

"Chancellor Scholz is clearly keen not to throw up hurdles for this pipeline," he said. "Apart from his party's more lenient approach to Russia, there's also the issue that Germany's policies to shut down nuclear and coal energy sources have made it more reliant on Russian energy."

Talk of possible sanctions against Moscow

After the summit, EU leaders reasserted their position that there would be "massive consequences" if there was any further aggression against Ukraine.

Russia has amassed around 100,000 troops on the Ukrainian border over the past few weeks, raising fears of a potential invasion.

EU leaders were discussing an expansion of sanctions against Moscow, and while they say there is the scope for further "restrictive measures," no more details were provided.

"The EU really needs to decide how much pain its willing to accept in order to inflict pain on the Kremlin," Ian Bond, director of foreign policy at the Centre for European Reform think tank, told DW.

"President Putin is not going to be deterred by sanctions on a bunch of people no one has ever heard of," he added. "Cutting Russia off from the international payment system, SWIFT, for instance, would actually have a pretty heavy hit on the Russian economy as most Russian banks are dependent on SWIFT."

That sentiment is shared among some EU governments.

Lithuania's former Foreign Minister Linas Linkevicius, whose country shares a border with Russia, tweeted during the summit to say the EU should give up its "bored rhetoric about mystical 'dialogue' with Russia."

The EU leaders also held discussions on relations with Africa, the situation in Belarus, countering rising energy prices, migration and strengthening EU security, including cooperation with the NATO military alliance.