An EU agency set up to counter Kremlin disinformation campaigns will receive extra resources as Europe faces two major elections. But the East Stratcom Task Force only has a team of ten to debunk fake news stories. The European Union is stepping up attempts to counter fake news spread by the Kremlin. According to an EU Foreign Affairs and Security Policy spokeswoman, the bloc's East Stratcom Task Force will be getting additional employees in 2017 - just as France and Germany face major elections.

Up until now, the East Stratcom Task Force says it has concentrated on Eastern Europe, trying to create what it calls a "positive EU narrative" in the region by explaining policy, while analyzing disinformation trends and "busting myths." But recently it has also been correcting more and more Germany-related stories - not least the false but much-shared Breitbart story claiming that a mob of Muslims had burned down Germany's oldest church in Dortmund on New Year's Eve.

It also debunked a story published in late December by the Russian state news agency RIA Novosti claiming that 700,000 Germans were leaving the country every year because of Chancellor Angela Merkel's refugee policy. This was also untrue (official government statistics say that around 150,000 people emigrate from Germany per year in total, and their motivations are not recorded). The falsehood was not surprising, given that the source of the number quoted by RIA Novosti was not an official authority, but the leader of the anti-Islam movement Pegida, Lutz Bachmann. 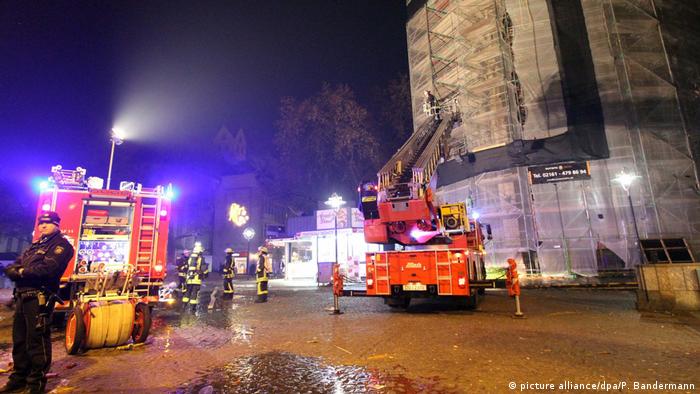 There is a network of people and organizations (such as Stopfake.org, which concentrates specifically on disinformation about Ukraine) that refer false news stories to East Stratcom, whose staff investigate and write "disproof" statements - which are being turned into a searchable multilingual online database.

The task force, part of the European External Action Service (EEAS), was set up in March 2015 specifically to "address Russia's ongoing disinformation campaigns." It is a relatively modest operation - ten staff members gather the fake news and then release their debunking in a weekly newsletter.

"The scale of the challenge was never commensurate to our resources," one EU official, who wished to remain anonymous, told DW. "You need to understand the resources that are being put into this from the Russian side."

There have been many reports of Russian state-backed "troll factories" being used to spread disinformation. But it is difficult to trace specific fake stories to the Russian government, and since East Stratcom does not quantify its data, and relies on a disparate network to find the stories, it almost never has evidence that the Kremlin is behind any particular fake news story.

Christian Stöcker, professor of digital communication at Hamburg University of Applied Sciences and former "Der Spiegel" journalist, had his doubts about how effective the task force might be - not least because many people are likely to see it as a propaganda tool for the EU. "The question of whether people who respond to fake news are open to different interpretations and corrections is open," he said. "There's probably a proportion that can't be reached anymore at all." 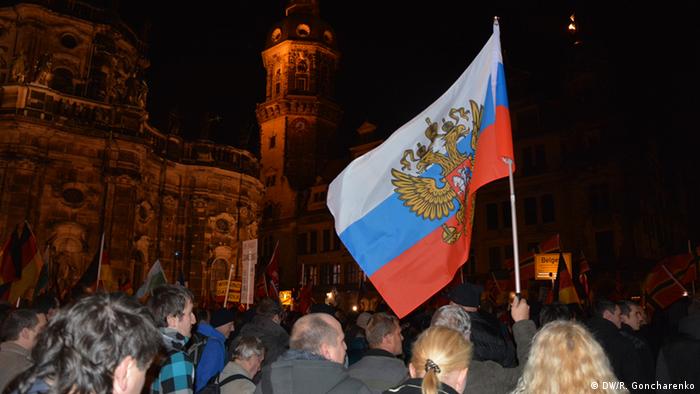 Russian flags have been spotted at Pegida demos

"But with the volume of misinformation that we're seeing right now, basically every hand is welcome," Stöcker told DW. "It's not easy for news organizations or NGOs to put up the resources that you need to actually debunk all this crap. So if the EU is willing to spend some money there just providing facts and not opinions or interpretations or whatever, it's a welcome addition to a worthy cause."

Germany is no stranger to fake news. Stöcker says similar fake stories - often about alleged crimes by refugees - have been spread in Germany since mid-2015. In January 2016, reports that a 13-year-old Russian girl was raped by a migrant in Berlin were widely circulated even after she admitted to making up the story. It also prompted criticism of the Berlin police from Russian Foreign Minister Sergey Lavrov: "The news that she disappeared was kept secret for a very long time," he told a press conference.

"Will the volume of this increase in 2017? I think it will," said Stöcker. "And the people who are spreading this information obviously have a strong incentive to influence the outcome of the general election."

But the origins are often very hard to trace. Sometimes German far-right groups have been identified as the source, but whether Russia is behind them is hard to tell. "There are a variety of right-wing conspiracy publications, like 'Epoch Times' for example, in the German media landscape, and you don't really know where their funding comes from," he said. "But there is certainly a new development in Germany that some people with far-right attitudes seem to have a great love for the Russian government."

Instead of the"Sisyphean task" of debunking the tidal wave of fake news, Stöcker suggested East Stratcom might try another strategy: "What would be necessary is to really follow the money and prove that these publications are run or funded or otherwise supported by Russian entities. And I don't think that has happened."

As election season begins, fake news reports targeting the chancellor have spiked, according to a source close to an EU probe. German officials have warned the phenomenon may directly influence the parliamentary vote. (24.01.2017)

How to influence voters and tamper with the German election

Amid fears that Russia may try to influence Germany's election on September 24, DW explores the many ways Moscow could sway voters. Our analyst asks whether the fear itself, is perhaps Moscow's greatest weapon? (19.01.2017)

Fake news and hate speech are disseminated via social media on a daily basis. Many profit from this anonymous agitation. But two Austrians have taken it upon themselves to expose fake news and hoaxes. (24.01.2017)