EU leaders and Britain's PM say they will try to inject new momentum into stalled negotiations on post-Brexit trade relations. Both sides have committed to speeding talks on forging fresh relations over the summer. 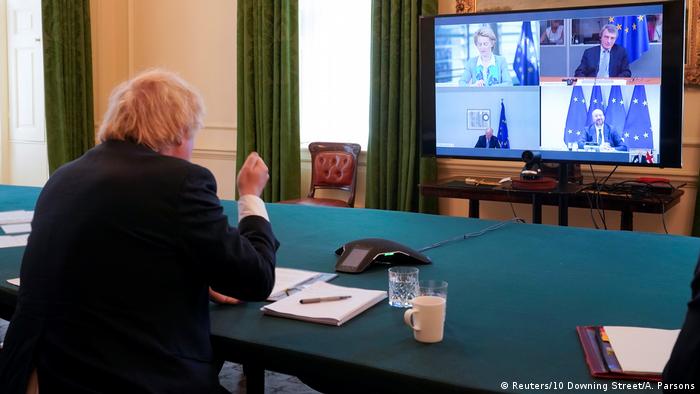 Britain and the European Union agreed on Monday to intensify talks over the coming weeks in order to reach a trade deal by the end of the year.

A current temporary deal is set to expire on January 1 next year. London had already ruled out asking for more time for its representatives to reach a deal.

"The transition period will therefore end on 31 December 2020, in line with the provisions of the Withdrawal Agreement," according to a joint statement issued after the meeting.

The parties "supported the plans ... to intensify the talks in July and to create the most conducive conditions for concluding and ratifying a deal before the end of 2020," the statement said, saying that both parties had agreed that "new momentum was required" in the faltering process.

"This should include, if possible, finding an early understanding on the principles underlying any agreement."

The UK government last week said that it would introduce border checks in stages after January 1, the latest signal that the country — which historically farmed most of its border controls out to European neighbors, most notably France — will not be ready to monitor its own points of entry in time.

UK importers of most EU goods would instead be able to delay submitting customs declarations or paying tariffs for six months, although they would be required to keep customs records. Full checks are expected to be put in place by July next year.

Discussions between EU negotiator Michel Barnier and his British counterpart David Frost have mostly taken place by video link because of the COVID-19 outbreak.

Monday's virtual meeting was the first time Boris Johnson personally took part in the talks, which began three months ago.