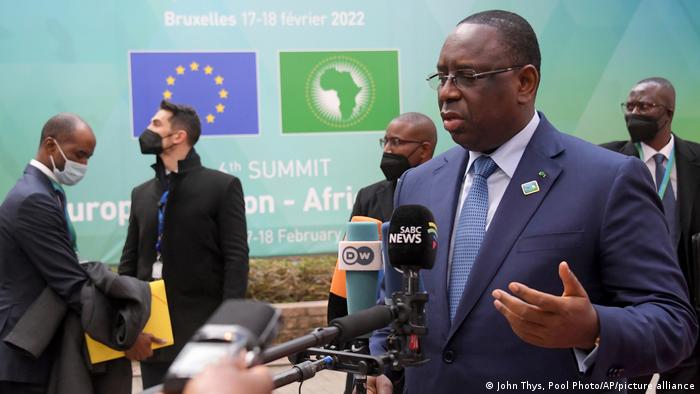 European Union (EU) and African leaders launched a two-day summit in Brussels on Thursday. During the first joint summit since 2017 — 2020 having been canceled due to the coronavirus pandemic —Europeans will aim to convince their African guests that they are their "most reliable partner" in the face of tough competition on the continent from China and Russia.

"It's a fresh start for a renewed partnership," said the chairman of the African Union (AU), Senegalese President Macky Sall, as European Council President Charles Michel proclaimed, "We are not here to carry on business as usual."

The EU will use the summit to roll out an initiative aimed at generating €150 billion ($170 billion) in public and private investment funds over the next seven years. The plan is the first regional installment of the EU's new Global Gateway project — a €300 billion worldwide investment program meant to rival China's Belt and Road Initiative.

The EU's initial pitch features a dozen ambitious projects for boosting internet access, transport links and renewable energy as it seeks to provide an alternative to loans from Beijing. Funding details remain vague, however, and African partners have yet to agree to them.

So far, African leaders have instead expressed the desire for EU partner nations to allow the International Monetary Fund (IMF) to provide tens of billion of dollars in continuing aid.

EU has security concerns during time of upheaval in Africa

The summit will provide the opportunity to deal with a host of complicated issues, ranging from disputes over coronavirus vaccine supplies, to curbing illegal migration, a wave of military coups, and the growing presence of Russian mercenaries on the continent.

Stability has become a growing concern, as Africa, already dogged by Islamist militants, has seen a wave of military coups take place over the past 18 months, and larger countries such as Ethiopia slide deeper into serious conflict. Last month, Burkina Faso joined Guinea, Mali and Sudan as the fourth country frozen out by the AU after its army toppled the elected president — none of the four will be represented in Brussels.

Also of concern to the EU is Russia. Not only is Moscow making life difficult in Ukraine, mercenaries from the Russian paramilitary group Wagner have also been popping up across the African continent.

Western nations fear Russia is stepping into a vacuum left by a reshuffling of European forces on the continent as France and several allies on Thursday announced the withdrawal of their troops from Mali in the wake of that country's recent military coups. Wagner mercenaries are said to already be on the ground in Mali, though the military junta now leading the country says it has no contract with the group.

Other candidates seeking to fill any possible power vacuum abound in the form of Islamist terror outfits like al-Qaeda or "Islamic State." These are exactly the kinds of groups France and its allies went to Mali to fight. A spate of military coups across the continent have given them fresh life and a chance to reconsolidate.

Europe's foreign affairs chief, Josep Borrell, said the bloc was evaluating the future of its training mission in Mali: "We are not abandoning Sahel, we are not abandoning Mali, we're just restructuring our presence in order to face the new political situation," he said.

It is reported that the bloc also intends to increase funding for African peacekeeping missions across the continent.

Speaking prior to the meeting, Borrell said Europe and Africa were closely interlinked: "African problems are our problems. When we work to try to solve these problems, we work for ourselves as well," he told the European Parliament Tuesday.

The fight against the COVID-19 pandemic is also set to be a major topic of discussion.

Africa has been angered over what it perceives as the unfair worldwide distribution of coronavirus vaccines, saying it has been left behind. South Africa's Cyril Ramaphosa has accused the West of giving his continent only the "crumbs from their table" as the EU has rebuffed a push by South Africa and India for a temporary patent waiver to allow the generic production of vaccines. Ramaphosa said his demand for lifting patents is still on the table, adding, "it takes a conversation."

EU leaders lauded their own vaccine cooperation with Africa, yet they offered no sign that they would lift intellectual property rights protection for COVID-19 vaccines.

The EU is the world's biggest vaccine exporter and claims it has donated 400 million jabs to the global COVAX initiative as well as promising to give Africa 450 million doses by mid-2022. The bloc says it will increase funding to help health systems on the continent get jabs into arms, as well as pledging €1 billion euros toward bolstering future vaccine production in Africa.

Boost for fight against COVID-19 in Africa

"It is about the capacity of Africa to produce their own vaccines, to develop mRNA manufacturing capacity across Africa," said von der Leyen: "We are confident this hub will empower African scientists and companies. This is not only about production of COVID-19 vaccines. The mRNA technology can also be used for vaccines against other widespread diseases in Africa, like malaria and tuberculosis.''

Earlier this week, the European Commission also announced that the EU and the Gates Foundation would invest over €100 million over the next five years to help set up an African medicines regulator to boost the continent's drug and vaccine production.

The push to establish the African Medicines Agency (AMA) comes after the pandemic spotlighted Africa's dependence on imported vaccines.

EU and other wealthy nations were roundly criticized for hoarding protective equipment and then vaccines during the coronavirus pandemic, with some African leaders complaining that the slow pace of donations could lead to what they called "vaccine apartheid."

Some outside groups claimed the EU was prioritizing profit by selling vaccine doses to rich countries while exporting only a fraction of its shots to Africa. The World Health Organization (WHO) says that only 11% of Africans are fully vaccinated, compared to the global average of about 50%.

Separately, the European Investment Bank announced Thursday that it would make €500 million in cheap loans available to African countries seeking to strengthen their healthcare systems. The bank expects that credit to generate a total of €1 billion in private and public investments.

Other issues to be addressed at the summit will deal with European and African colonial ties, migration flows and the erosion of democracy in numerous African countries.