Germany, US warn of growing influence of 'Islamic State' 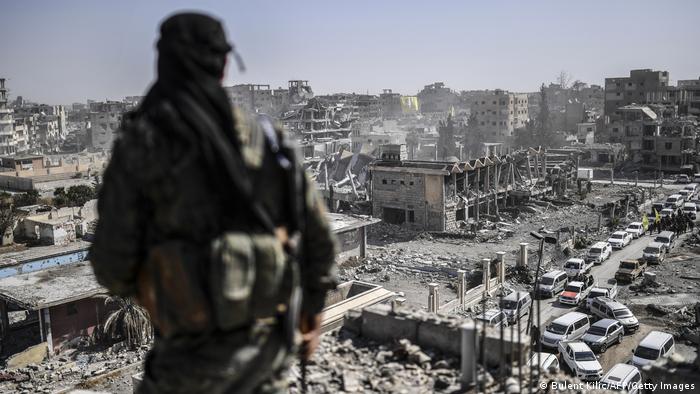 IS lost its last stronghold in eastern Syria in 2019

The United States and several of its European allies voiced concern over the ongoing threat posed by the "Islamic State" (IS) militant group on Monday, during an international anti-IS coalition meeting in Italy.

The US-led coalition convened in Rome to discuss strategies to combat terrorism.

German Foreign Minister Heiko Maas on Monday warned that IS was gaining influence beyond Iraq and Syria, where it originated.

"The IS in Iraq and Syria has been pushed back, but not defeated," Maas said, noting the militant group's increasing terrorist activity in Afghanistan and Africa.

But Maas ruled out an imminent withdrawal from Mali, despite a terror attack last week that left 12 soldiers injured.

"We must realize that the region is at risk of becoming a hub for international terrorism," he said, adding that it is crucial to continue engaging with partners in the region.

Foreign ministers of the 83-country coalition addressed the fight against terrorist groups in Syria and Iraq, as well as in Africa and Afghanistan.

The anti-IS coalition has previously launched missions in Syria and Iraq. The German military, the Bundeswehr, has around 250 soldiers training Iraqi armed forces.

Italy, the summit's host, said it wanted to create a new taskforce to counter the threat from extremists in Africa.

But Foreign Minister Luigi di Maio gave no further details about when or how such an organization would be set up.

He told reporters that it was needed to "identify and stop IS-related terrorist threats on the continent."

US Secretary of State Antony Blinken, who was also attending the meeting, said that Washington backs Rome's efforts to tackle extremist threats in Africa.

"We strongly support Italy's initiative to make sure that the coalition against Daesh focuses its expertise on Africa, while keeping our eye closely on Syria and Iraq," he said, referring to IS by its Arabic acronym.

The pair's comments came as German Chancellor Angela Merkel called for greater international cooperation in fighting terrorism in West Africa after a suicide attack in Mali on Friday.

"In the coming years, we will have to bring all these missions together and coordinate them even better," she told a meeting of the Franco-German Parliamentary Assembly.

US warning over Syria

Washington's top diplomat urged coalition allies to bring back their citizens who were arrested for joining the militant group and are now sitting in crowded prison camps.

Blinken said that 10,000 suspected IS fighters continue to be held in detention in camps run by the Kurdish-led Syrian Democratic Forces (SDF).

He described the situation as "untenable" and noted that it "just can't persist indefinitely."

Blinken called on officials to repatriate, rehabilitate or prosecute their citizens who had joined the Islamist outfit.

How active is the 'Islamic State'?

In 2019, IS lost its last stronghold in eastern Syria. However, the group is still active in Syria and Iraq.

At least 30 people died in an attack in the Iraqi capital, Baghdad, in January. Earlier this month, the group claimed responsibility for an attack that left 10 people dead in Afghanistan.

Militants affiliated with the group also operate in other regions, including Afghanistan, Yemen, Egypt's North Sinai and West Africa.