Lieutenant-Colonel Paul-Henri Sandaogo Damiba was sworn in three weeks after leading a coup that toppled the government. Observers and neighbors have remained concerned but reserved about the developments. 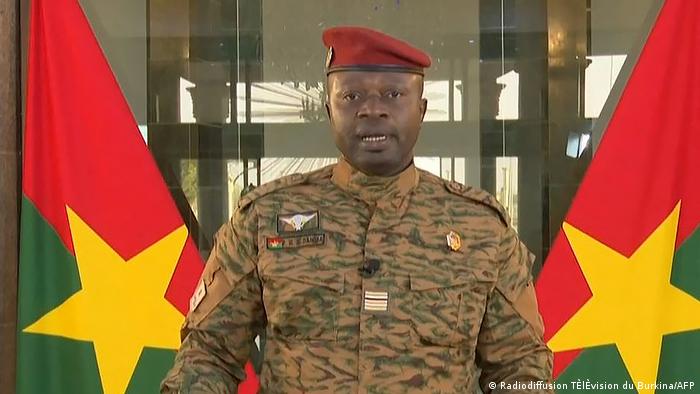 Damiba, leader of Burkina Faso's military junta, is now president, head of state and supreme commander of the army

Sporting a camouflage uniform, red beret and a sash in the colors of the Burkinabe national flag as he appeared before the Constitutional Council, the country's top constitutional body, Damiba swore to "preserve, respect, uphold and defend the Constitution" in a televised ceremony.

The Constitutional Council last week determined that Damiba, who led the coup that deposed Kabore on January 24 over his handling of Islamic jihadist insurgents, was president, head of state and supreme commander of Burkina Faso's armed forces.

Prior to the Council's announcement, Burkina Faso's military junta, also known as the Patriotic Movement for Preservation and Restoration (MPSR), had already declared that the 41-year-old Damiba would assume the posts on an interim basis.

After a moment of silence for victims of the jihadist attacks that have plagued the country since 2015, Damiba paid his respects to the "Burkinabe people, who have been enduring the scars of terrorism for more than six years." He also called for "collective awareness about the effort and sacrifice" needed for the fight.

Damiba previously led the fight against jihadists linked to al-Qaeda and the so-called "Islamic State" (IS) in one of the country's worst-hit regions, and last June published a book questioning the government's counter-terrorism strategy.

More than 2,000 people have been killed in clashes and attacks in Burkina Faso since 2015, and the country's emergencies agency says more than 1.5 million people have been forced to flee their homes during that time.

How are other countries in the region reacting to Burkina Faso?

The junta initially suspended the constitution when it took power on January 24, but later reversed itself under pressure from neighbors demanding a return to civilian rule.

Both ECOWAS and the AU are calling for the immediate release of former President Kabore, who has been under house arrest in the capital, Ouagadougou, since his removal from office.

The UN Security Council expressed "serious concern" over the country's "unconstitutional change of government" on February 9, but has so far elected not to describe it as a military coup or condemn it outright.

Burkina Faso avoiding a fate similar to Mali — so far

ECOWAS, which has called for "the speedy creation of a reasonable timetable" for return to civilian rule, has until now refrained from imposing further sanctions on Burkina Faso — unlike its approach to Guinea and Mali, which it hit with border closures, an embargo on trade and financial transactions, and sanctions against individuals for foot-dragging over elections.

"At these difficult moments, our country has not been abandoned by its partners," Damiba said on Wednesday. "Burkina Faso reiterates its readiness to work in full sovereignty with all partners in mutual respect."

To mollify neighbors, the junta announced on February 5 that a 15-member commission would be tasked with "drawing up a draft charter and agenda, together with a proposal for the duration of the transition period." Though military authorities promised to re-establish "constitutional order" within a "reasonable time," they have so far given no indication as to when that might be.

Gold-rich Burkina Faso has been crippled not only by violence but also drought and famine. The West African nation, one of the world's poorest, has seen no less than eight coups — not all of which have been successful — since gaining independence from France in 1960, and it has been plagued by Islamist violence since 2015.

It is one of seven African countries to experience a coup in the past 18 months.