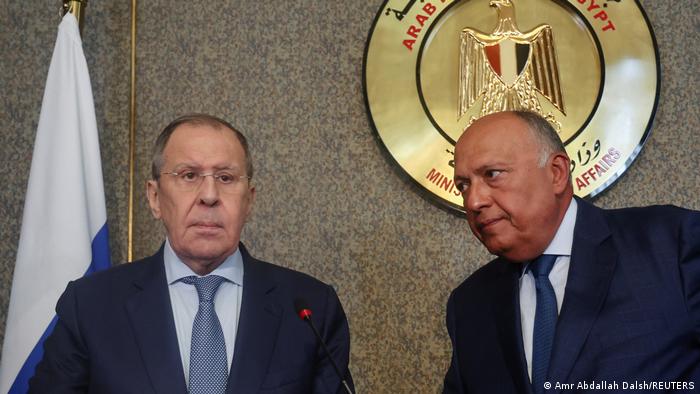 Russian Foreign Minister Sergey Lavrov is on an Africa trip this week. His itinerary includes Egypt, the Republic of the Congo, Uganda and Ethiopia.

On Friday, Russia and Ukraine signed a deal with the United Nations and Turkey aimed at relieving a global food crisis caused by blocked Black Sea grain shipments.

Many African nations are heavily dependent on imports of wheat and other grains from Russia and Ukraine, but supplies have been badly disrupted by the war in Ukraine, exacerbating the risk of hunger.

In June, African Union Chairman Macky Sall told Russian President Vladimir Putin that even though Africa was far from the theater of war, African people are "victims of this economic crisis."

Yet it is in the field of security where Russia seems to be trying to truly make its mark on the African continent.

Lavrov's visit is being seen as a push to rally the support of African nations, many of whom have strong historical ties with Russia, amid strong Western condemnation of the war in Ukraine.

In the months before his visit, Russia signed various political and military deals on the continent.

In early January, hundreds of Russian military advisors were deployed to Mali. Contractors from the controversial Russian military group Wagner Group were invited to "help Mali train its security forces," according to the Malian army.

This raised a few eyebrows: The assignment was previously the job of the European Training Mission to Mali (EUTM). After Colonel Assimi Goita overthrew late President Ibrahim Boubacar Keita in the 2020 Malian coup — and was later sworn in as president following a second coup in May 2021 — he faced regional and international sanctions for extending a proposed timeline for presidential elections.

The junta regime responded by banning German military planes from Mali's air space, expelling the ambassador of former colonial power France and calling for the immediate withdrawal of Danish forces.

Mali's southern neighbor Burkina Faso witnessed its own coup in January. Like its counterparts in Mali, the Burkinabe military has defied calls to hand over power to a civilian government. It, too, has oriented itself toward Moscow. 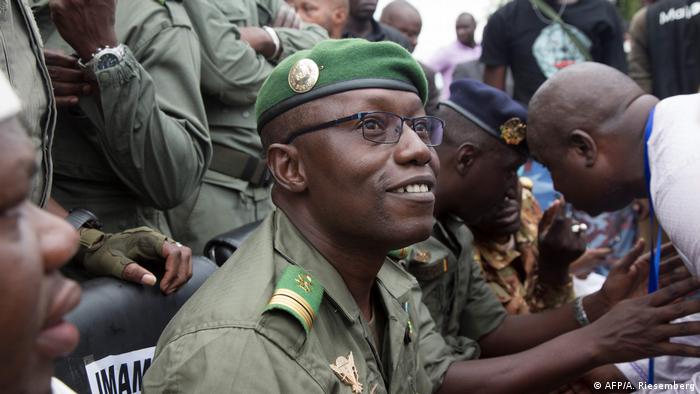 One of the leaders of Mali's military junta, Malick Diaw, received training at the Moscow Higher Military Command School

A link between foreign training and coups

Sudan, Chad, Guinea Conakry and Guinea Bissau have also experienced coups in the past year. One thing they all have in common: Most of the soldiers behind the coups had received military training sponsored by Russia.

"The qualities that recommend them for foreign training are the same ones that make them effective coup leaders," Judd Devermont, the director of the US-based think tank Africa Program for Center for Strategic and International Studies, told DW in late 2021.

The two Malians believed to be the chief architects behind the 2020 coup, Malick Diaw and Sadio Camara, each spent about a year at the Moscow Higher Military Command School. These same soldiers also took part in training missions organized by the US and the EU.

Following the coup, Kelly Cahalan, media operations branch chief for AFRICOM, told DW: "The mutiny act in Mali is strongly condemned and inconsistent with US military training and education."

According to Irina Filatova from the Higher School of Economics in Moscow, Russia aims to gain a foothold on the continent as a security broker in order to "confront the collective West" and project the image of a "defender of Africa" — an objective the West has seemingly failed to achieve.

It's far from the first time Russia has dabbled in African affairs: In the 1950s, the Kremlin backed liberation movements across the continent. At the time, Russia's main export was light-to-medium-range arms and ammunition.

And Moscow's influence was welcomed by many. "Without the firm stand of the Soviet Union during the Cold War and the heyday of the anti-colonial struggle, many of our countries would never have seen the light of independence," Obadiah Mailafia, a former deputy governor of Nigeria's central bank, told DW.

This support waned following the dissolution of the Soviet Union in 1991. But over the past two decades, current President Vladimir Putin has tried to revive those independence-era connections and act as a foil-of-sorts to the West's neocolonial policies.

"Now that Russia is in a fairly strong position, Africa can benefit from mutually beneficial investments and trade cooperation," said Mailafia.

Russia has officially remained silent on its policies for Africa. But, as Filatova sees it, Moscow is relying on private military companies like the Wagner Group to act as "door-openers."

"Officially, [the military groups] are not incorporated in the strategy at all. But what we see is that they always come first when there's some instability, and then they help secure those in power who have built relationships with Russia," she told DW.

The Wagner Group is also active in the Central African Republic (CAR), where it has been accused of serious human rights violations. The paramilitary fighters most notably drew attention after they starred in a locally produced film acting as defenders of the nation against CAR rebels. Thousands of people flocked to the main stadium in the capital Bangui to catch a glimpse of the premiere in May 2021.

Before this episode, the Wagner fighters had kept a comparatively low profile in theaters of war on the African continent.

For the most part, Moscow has been able to fly under the radar for the past two decades, quietly cutting nuclear power and arms export deals.

Russia is currently the largest exporter of weapons to the African continent. According to the Stockholm International Peace Research Institute's (SIPRI) annual 2020 report, arms exports to Africa accounted for 18% of all Russian arms exports between 2016 and 2020. 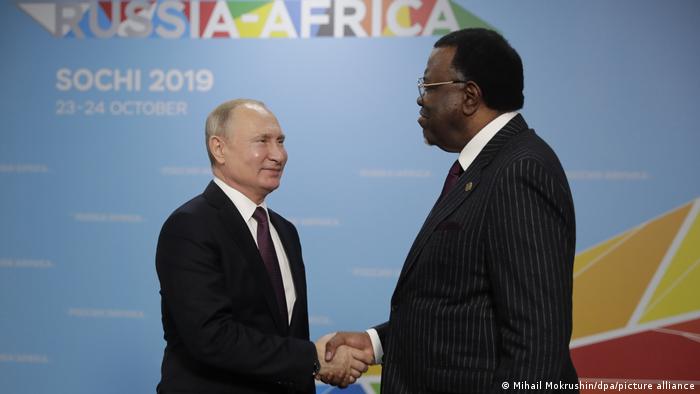 The first arms deal to be made public took place in April 2020, when Russia's only state-owned arms seller, Rosoboronexport, announced the sale of a Russian-made assault boat to an unnamed sub-Saharan African country.

A few months earlier, in 2019, the first-ever Russia-Africa Economic Forum was held in Sochi, with many big names in African politics in attendance. Russia used the occasion to elegantly tout its track record in Africa. By then it had made a name for itself as an ally of multiple nations as they battled relentless insurgencies: In 2018, Mali, Niger, Chad, Burkina Faso and Mauritania all appealed to Moscow for help combating the so-called Islamic State and al Qaeda. 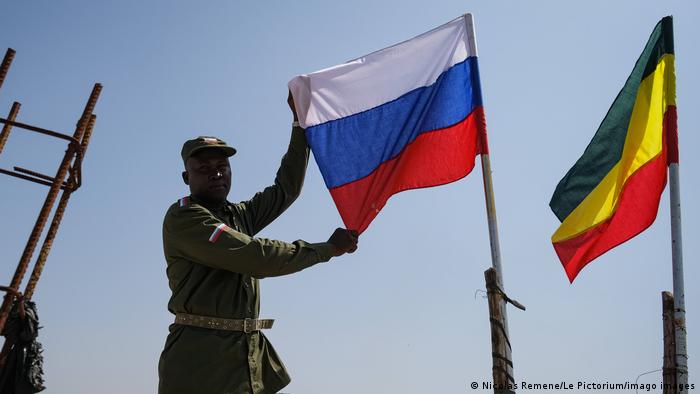 After the 2021 coup in Mali, Bamako residents raised Russian flags on their rooftops

Beyond military services, Moscow has also carved a niche selling nuclear technology to developing nations. Zambia, Rwanda, Ethiopia, Egypt and Nigeria are among those in the market for Russian-built nuclear power plants.

While the details of its various policies and deals remain in the dark, at least one thing is clear: Russia is back in Africa — and it means business.

Macky Sall has told the Russian leader the ban on grain and fertilizer is causing a food crisis on the African continent. Russia says the blame lies elsewhere.

The EU has targeted individuals working with Russia's Wagner Group, a private military contractor, which the bloc said is involved in "serious human rights abuses" in the Middle East, Africa and Ukraine.

The US has a new strategy for Africa to counter China and Russia. Rather than roll their eyes at the new scramble for the continent, Africans should see it as a chance to get the best deal for themselves, analysts say.

Kyiv and Moscow traded blame for shelling a POW prison in a separatist region of eastern Ukraine. Meanwhile, Blinken and Lavrov spoke for the first time since the beginning of the war. DW rounds up the latest.

Russia's top diplomat Sergey Lavrov has insisted that an agreement on grain exports did not stipulate that Moscow would stop hitting Ukrainian "military targets."