Burkina Faso, Guinea, Mali and Sudan have all been suspended from the AU. At a summit in Addis Ababa, AU delegates decried "the wave of unconstitutional changes of government." 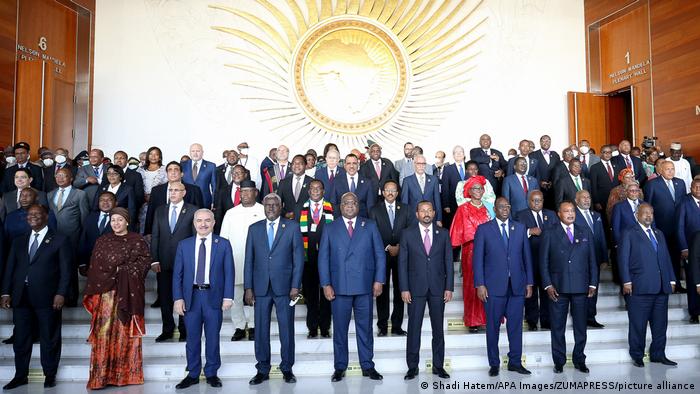 The leaders met for a two-day summit in Addis Abeba

The African Union on Sunday "unequivocally" condemned a wave of military coups and attempted putsches across the continent.

An unprecedented number of member states have been suspended from the bloc as a result of the military power grabs.

West Africa's recent surge in coups began in Mali in 2020, followed by another in Guinea the following year. Meanwhile, gunmen recently tried to overthrow the president of Guinea-Bissau in an attack that lasted hours but ultimately failed.

Sudan has been under suspension since June 2019, when the country was banned from all AU activities until the effective establishment of a civilian-led Transitional Authority. But the country' military intervened once again in October last year and detained the civilian prime minister, although the military leaders insisted the move should not be described as a coup.

"Every African leader in the assembly has condemned unequivocally... the wave of unconstitutional changes of government," Bankole Adeoye, head of the AU's Peace and Security Council, told the media.

"Do your research: At no time in the history of the African Union have we had four countries in one calendar year, in 12 months, been suspended," Adeoye added.

Addressing African foreign ministers ahead of the summit, Moussa Faki Mahamat, chair of the African Union Commission, denounced a "worrying resurgence" of such military coups.

Both South Africa and Algeria failed in their efforts to place the issue on the two-day summit's agenda.

As the summit got underway on Saturday, Faki defended Israel's accreditation, saying it could be "an instrument in the service of peace" while calling for "a serene debate."

He also said the African Union's commitment to backing Palestinian independence was "unchanging and can only continue to grow stronger."

Palestinian Prime Minister Mohammed Shtayyeh on Saturday said Israel's accreditation should be revoked, saying the country "should never be rewarded" for its "apartheid regime."

The two-day summit is hosted in the Ethiopian capital, but it was unclear how much attention was given to the 15-month war in Ethiopia. The conflict sees Prime Minister Abiy Ahmed's government pitted against fighters from the northern Tigray region. Abiy had received a Nobel Peace Prize in 2019, before launching the Tigray offensive.

The fact that Ethiopia hosts the AU makes any intervention by the bloc particularly sensitive, and Faki waited until last August — nine months after fighting began — to assign Olusegun Obasanjo as a special envoy tasked with seeking a cease-fire.

Ethiopia also held a seat on the Peace and Security Council throughout the conflict, though it failed in its bid to stay on the 15-member body for the next term, diplomats said.

On Saturday, Ethiopia's Abiy called for the African Union to be given a more significant voice at the UN's international peace and security organization. Abiy said the continental body should have a permanent seat on the UN Security Council, alongside the United States, Russia, China, Britain and France.

DW Akademie supports the establishment of information services and feedback systems in refugee camps and fosters dialogue between displaced people and host communities.

After its inaugural call for applications for Ethiopia earlier in the year, DW Akademie is delighted with the response from Tanzania and Uganda. Over 100 filmmakers applied for the Film Development Fund.

The number of people affected by displacement has been growing for decades – so has their need for information. Assessments in Ethiopia, Kenya and Tanzania show that this need is very different depending on the location.

A primer for democracy in Africa

For most experts, it is a given that lack of democracy stunts economic growth. But how can sustainable democracies be ensured throughout Africa? A new book by several African authors has some useful pointers.