The African Union is forging ahead with mediation talks in Ethiopia as the US warns of the potential far-reaching consequences of the conflict. But productive negotiations are still far from assured. 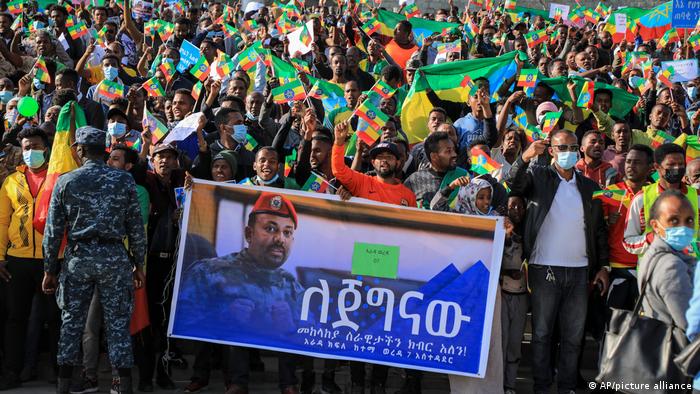 Kenyan President Uhuru Kenyatta made a surprise visit to Addis Ababa on Sunday to support the efforts by the African Union (AU)-led to facilitate negotiations toward peace between the Ethiopian government and a coalition of opposition groups.

The mediation efforts come ahead of an upcoming three-day visit to Africa by US Secretary of State Antony Blinken, who has backed the AU's attempts to help resolve the ongoing conflict in the East African country.

The US has also threatened to impose sanctions on the Ethiopian government and the opposition Tigray People's Liberation Front (TPLF) unless they agree to move forward on talks.

With thousands of people dead, 2 million displaced and mounting fears of a rebel march on the capital, Ethiopia's war threatens to unleash instability across the fragile Horn of Africa region.

The AU, which is headquartered in Addis Ababa, made a renewed effort in recent weeks to bring an end to Ethiopia's conflict, with former Nigerian President Olusegun Obasanjo leading the push.

The fighting has since intensified, and groups aligned with the TPLF have made major territorial gains as they advance toward the capital.

Both sides refuse to budge

Obasanjo left Ethiopia on Thursday following meetings with Prime Minister Abiy Ahmed and the leadership of the TPLF rebel group. However, neither side made any commitments to negotiate.

The Ethiopian government laid out conditions for possible talks, which includes a ceasefire and the TPLF's recognition of the government's legitimacy. The TPLF in turn is demanding that aid be let into Tigray, the region where the conflict erupted last year. No supplies have arrived by road since October 18, and 364 trucks are still stuck in the Afar Regionawaiting authorization, according to the United Nations (UN).

In a statement, the TPLF's leader, Debretsion Gebremichael, said a coalition of nine political parties, including the TPLF, was being formed to "overthrow the Ethiopian government and facilitate the next transition." 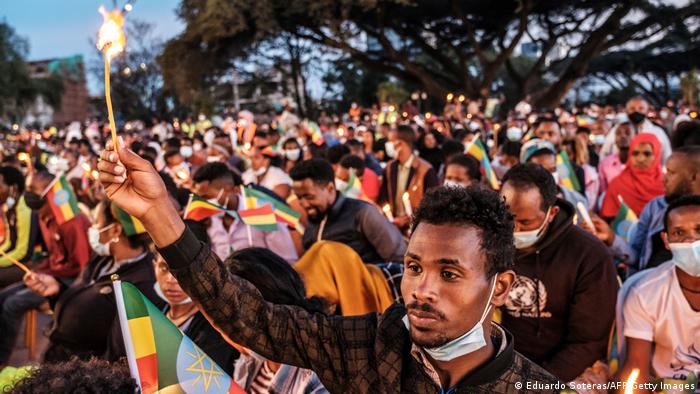 The war has caused serious casualities on both sides

"I, therefore, appeal to the leadership of all sides to halt their military offensives," he said. "This will allow an opportunity for dialogue to continue to progress."

Blinken warned on Friday that a failure to strike a deal "would lead to the implosion of Ethiopia and spill over into other countries in the region."

On the same day, the United States issued sanctions on Eritrean entities — including the Eritrean Defense Force and the ruling party, the People's Front for Democracy and Justice — for their role in the yearlong war in neighboring Ethiopia. Washington says it is prepared to take action against other parties in the conflict.

Blinken plans to travel to Kenya, Nigeria and Senegal this week, with the conflict in Ethiopia high on his agenda. 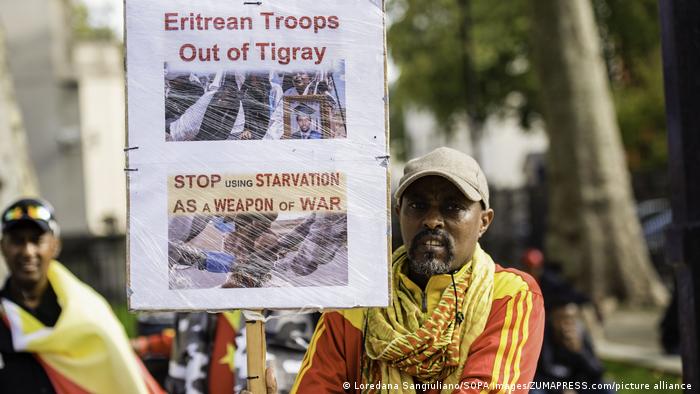 Murithi Mutiga, the International Crisis Group's project director for the Horn of Africa, told DW that any negotiations held from this point will determine Ethiopia's future.

"The situation in Ethiopia is currently very perilous," he said from Nairobi. "This is probably the most dangerous moment in the country for decades. The primary issue is that all sides have decided that they can settle this conflict militarily."

According to the analyst, the Tigrayan forces have gained strength — a major factor not to be underestimated.

"They seem determined and will try to make a decisive move that could either lead to the end of the siege in Tigray or the collapse of the Abiy government," Mutiga said.

Meanwhile, the Ethiopian government has stepped up its own war rhetoric. Facing a possible advance on Addis Ababa, it is calling for a general arming of the people, as well as for all civilians to join the fight.

Abiy, who was awarded the 2019 Nobel Peace Prize for his swift political reforms in the Horn of Africa after taking office in 2018, declared a state of emergency last week, labeling TPLF leaders as terrorists, or "weeds."

Facebook later removed a post from Abiy for violating its policies against inciting violence, after the prime minister called on people to "bury" advancing fighters. A failure of diplomacy

Bayisa Wak-Woya, a former UN worker from Ethiopia, told DW that he blames poor diplomacy for the crisis. Many diplomats, he said, have insufficient understanding of the various traditions and cultures in Ethiopia, which has hindered their mediation efforts.

"It is very difficult to know what is happening at the war front in Ethiopia now," he said. "Transparency is a rare commodity in that country."

He said one thing was certain, however: "Civil wars are different from wars of aggression."

In civil wars, maintaining the state's sovereignty is essentially a nonargument: "What are human rights violations for some is maintaining law and order for others. This makes it difficult to design a dignified exit [from the fighting] for the parties involved."

Wak-Woya said he remained optimistic that that peace could be secured in the region, but he added that the international community would need to change its approach.

"External powers ... should refrain from taking sides and putting pressure on the parties in the conflict," Wak-Woya said. "So far, the diplomatic talks failed to bear fruit, because the international community started to condemn parties. Not a good start."