US sanctions Eritrean military over role in Tigray conflict

Washington has blacklisted the Eritrean military as it ups pressure on parties fighting in northern Ethiopia. The US cited "numerous reports" of the killing of civilians by Eritrean forces. 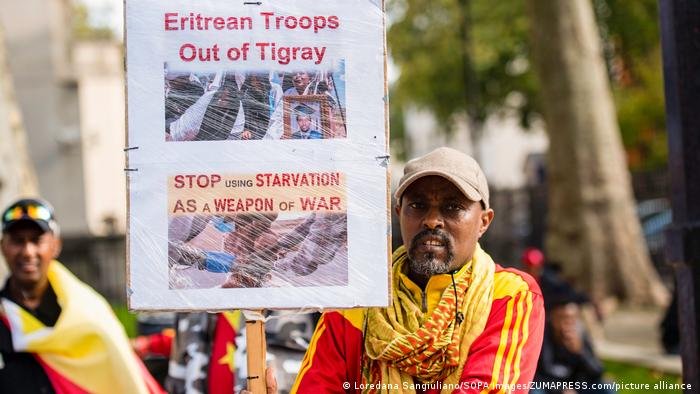 The United States on Friday imposed sanctions on the Eritrean military and other Eritrea-based individuals and entities over their "continued role" in the yearlong conflict in neighboring Ethiopia that has killed thousands and displaced millions.

Ethiopia's government allowed Eritrean soldiers to enter Ethiopia's northern Tigray region but then denied the soldiers were there for months.

Who else has been affected by the US sanctions?

Washington also warned it would sanction Ethiopia's government and rival Tigray forces if there is no "meaningful progress" toward a ceasefire and mediation.

"This unilateral sanction, that shifts blame to and scapegoats Eritrea on the basis of spurious allegations, is in contravention of international law, and constitutes a flagrant breach of... sovereignty," the ministry said in a statement.

It added that the sanctions aimed to "inculcate suffering and starvation on the population so as to induce political unrest and instability is patently clear."

Shortly after the release of the Eritrean statement, Ethiopia called on the US to "rescind its decision."

"The real target for sanctions and further tougher actions by the US government and the greater international community should be directed towards the TPLF," Ethiopia's Foreign Ministry said, referring to the Tigray People's Liberation Front group.

Ahead of a three-nation trip to Africa next week, Secretary of State Antony Blinken urged for the start of talks between the Ethiopian government and fighters to end fighting in Tigray.

"The other path is to halt all of the military actions that are currently underway, sit down to negotiate a real ceasefire to make sure that humanitarian assistance can get in to all of the regions where people are in need," he said.

"I believe that that is still not only possible, but necessary."

War erupted in November 2020 between Ethiopian federal troops and forces loyal to the Tigray People's Liberation Front group (TPLF), the ruling party of Tigray. The conflict has left hundreds of thousands in famine-like conditions

The United States has denounced both Tigrayan fighters and Prime Minister Abiy Ahmed, a Nobel Peace Prize winner, over the war, which has since spread into two neighboring regions in northern Ethiopia.

Tedros, a former Ethiopian foreign minister under the previous government, said Tigrayans across the country were "being profiled and arrested en masse, by the thousands."

"This is blatant and open," he added.

The UN's special adviser on genocide prevention, Alice Wairimu Nderitu, says the parties fighting in Ethiopia's war have few options but to negotiate.