The African Union has secured more than 100 million vaccine doses with partial help from the United States. Meanwhile, China will begin vaccinating children as young as 3 years old. Follow DW for more. 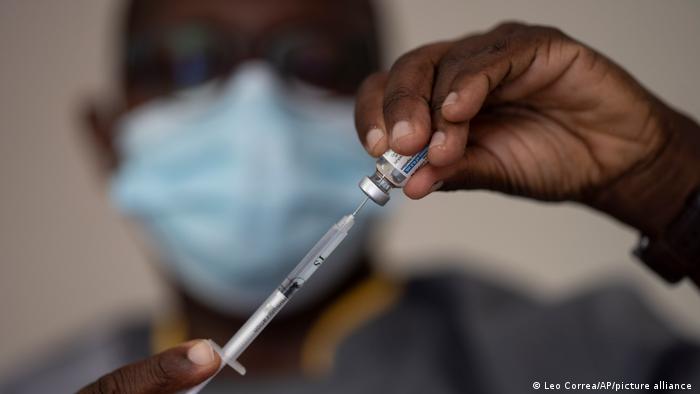 Africa is the continent with the slowest vaccination rate

The African Union (AU) said it would buy up to 110 million doses of the COVID-19 vaccine from drugmaker Moderna. The purchase comes as African countries struggle to obtain vaccine supplies.

The White House's deputy coordinator for the COVID-19 response, Natalie Quillian, said the US was deferring a delivery of 33 million doses it had bought from Moderna to give the AU its "spot in line" to make a purchase.

The AU's doses will be delivered over the coming months, with 15 million arriving before the end of 2021, 35 million in the first quarter of next year and up to 60 million in the second quarter.

"This is important as it allows us to increase the number of vaccines available immediately," AU coronavirus envoy Strive Masiyiwa told Reuters.

"We urge other vaccine-producing countries to follow the lead of the US government and give us similar access to buy this and other vaccines," he added.

The new shipments of vaccine are still well below what the African continent needs to vaccinate its 1.3 billion people.

Doses of BioNtech and Pfizer's vaccine for use on children is being considered by a US Food and Drug Administration expert panel. The team of advisers on Tuesday began weighing up whether the doses were safe for children aged 5 to 11-years-old.

The pharmaceutical companies have said that their shot had a 91% efficacy rate. Reviewers for the FDA said that protection would outweigh the risk of side effects. The team of advisers must now decide whether that is indeed the case.

COVID-19 Special: Vaccinations for children – who's at risk?

Belgium announced Tuesday restrictions will come back into force after they were relaxed a few weeks ago, resulting in a sharp 75% increase in infections over the last week.

Prime Minister Alexander de Croo announced, "As of Friday, there will be face masks in public places and they will be mandatory for staff of bars, restaurants and fitness clubs."

A COVID-19 pass showing proof of vaccination, recovery from the virus or recent negative test will be required to enter bars, restaurants and fitness clubs from next week. Over 85% of Belgian adults are vaccinated, which De Croo said prevented the country from returning to a full lockdown.

Sweden on Tuesday reported nine more COVID-related deaths since Friday, pushing the country's death toll from the disease past 15,000, according to data. However, even though deaths are edging up again after a lull in summer, they have not reached anything like the peaks levels of the winter.

During the first two waves of the pandemic, Sweden, which pursued a no-lockdown policy, had a per capita death rate far above that of other Nordic countries though lower than in most European countries overall.

Around 85% of all Swedes aged 16 and above have received a first dose of vaccine and 80% have had two shots or more.

Russia's coronavirus task force reported 1,106 deaths in 24 hours, Ukraine registered a toll of 734 and Bulgaria 243. Just 33% of people in Russia are fully vaccinated, with an even lower rate of 16% in neighboring Ukraine. Bulgaria is the EU member state with the lowest rate of fully vaccinated people at 25%.

Switzerland is recommending booster shots for over 65-year-olds starting in mid-November. Health authorities said the third shot should be given at least six months after the second dose. The country has so far stopped short of recommending the booster for the general population.

China will begin vaccinating children as young as 3 years old, with  at least five provinces issued notices in recent days announcing that children ages 3 to 11 will be required to get their vaccinations.

Some 76% of the population has been fully vaccinated against coronavirus.

The announcement comes as parts of China placed the city of Lanzhou, with four million inhabitants, under lockdown, in a bid to stamp out a domestic coronavirus spike.

Officials said the "entry and exit of residents" would be strictly controlled and limited to essential supplies or medical treatment.

New Zealand said it will expand a vaccine mandate to include thousands of workers who have close contact with customers, which would include employees at restaurants, bars, gyms and hair salons.

This means that 40% of all New Zealand workers would have to get fully vaccinated against the coronavirus or risk losing their jobs, up from about 15% previously.

The announcement comes after the government set a target of a 90% vaccination rate for people over the age of 12, in order to end the cycle of lockdowns.

Thailand recorded fewer than 8,000 new infections within 24 hours for the first time in months, just days before its planned re-opening to international tourism.

Thailand plans to welcome people travelling by air from 46 countries with low coronavirus numbers from November 1. These include Germany, Austria and other EU countries as well as the US, Chile, the United Arab Emirates and Bhutan.

Travellers must be fully vaccinated and in possession of a negative coronavirus test before departure. But they must also register for the new "Thailand Pass."

Moderna agreed to distribute 2.44 million doses of the vaccine produced by Samsung to South Korea, which said the shots would be widely used in the current quarter, including as boosters for high-risk groups.

Mexico began vaccinating adolescents with chronic diseases in its capital city. Authorities said they had begun using the BioNTech-Pfizer vaccine for minors with comorbidities aged 12 to 17 years old.

The move comes after the Mexican government said it would not include minors in its national immunization plan, arguing that exposing them at an early age to the vaccine could affect their immune systems.

The northwestern state of Baja California, which borders the US, also began COVID-19 vaccinations for minors with serious illnesses.

Mexico has the world's fourth-highest COVID-19 death toll relative to population, and the highest mortality rate in observed cases, according to Johns Hopkins University of Medicine. With  Mexico's population of 126 million people, some 53.5 million adults have been fully vaccinated.

Some 8,000 Nicaraguans were vaccinated for COVID-19 at two customs border crossings with neighboring Honduras in recent days, Honduran health authorities said, as supplies of the inoculations in Nicaragua have run low.

Honduran President Juan Orlando Hernandez wrote in tweet that "the solidarity and brotherhood of Hondurans crosses borders," adding that up to 500 doses were being given to Nicaraguans daily.

Honduran health authorities described the cross-border assistance as a way to help beat back the risk of greater infections at home.

German biotechnology company BioNTech, which together with its US partner Pfizer developed the COVID-19 vaccine most widely used in the Western world, has signed an agreement with the Rwandan government and Institut Pasteur de Dakar in Senegal on constructing the first mRNA vaccine manufacturing facility in Africa starting in mid-2022.

The aim is to help Africa redress the health inequalities it suffers compared to other world regions.

What's the COVID situation in Europe as it enters its second pandemic winter?