Ethiopian troops are pushing toward the regional capital of Mekelle. The army has been fighting a two-week conflict with Tigrayan forces that has forced tens of thousands of people to flee to neighboring Sudan. 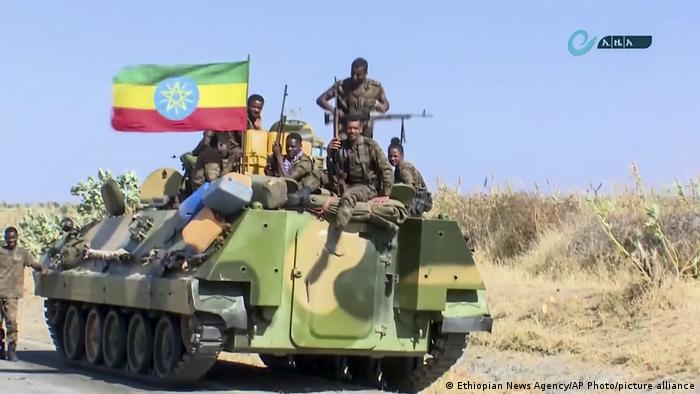 Ethiopia's federal government said Wednesday that army forces were marching on Tigray's capital as international groups appeal for an end to the conflict in the African country.

The federal government committee established for the crisis said "armed forces continue to advance toward Mekelle."

Tigray's regional authorities responded to the offensive Wednesday by saying they would never surrender. "Tigray is now a hell to its enemies," the local government said in a statement.

Tigray authorities had said earlier that two civilians were killed in an airstrike on the city, a claim the federal government has denied. They also said 100,000 civilians had been displaced during fighting in the northern region and called for urgent humanitarian assistance.

Ethiopian Prime Minister Abiy Ahmed, who won the Nobel Peace Price in 2019 for reconciliation efforts with Eritrea, launched the offensive in Tigray on November 4 in what he said was a response to an attack on a government base in the region. For two weeks, federal troops have been fighting with forces from the Tigray People's Liberation Front (TPLF), the region's ruling political party that has now been designated a rebel group.

Ethiopian Defense Minister Kenea Yadeta told DW on Tuesday that the operation will end once the TPLF is "under control" and "willing to surrender."

The TPLF long dominated Ethiopian politics but has been at odds with Abiy since he took office in 2018. Many Tigray elites have been purged from government and state institutions.

Both sides have reported casualties, and nearly 30,000 people have been forced to flee to neighboring Sudan. An internet and telephone blackout in the country has made it difficult to obtain concrete details of the situation on the ground.

Over the weekend, TPLF forces fired rockets across the border into Eritrea, claiming the government in Asmara was collaborating with Ethiopian authorities.

The crisis has worsened the suffering for many of the people in the region who already depended on food aid.

The UN and other international organizations have been warning of the potential for disaster. Food aid trucks have been stranded at regional borders and banks in Tigray have been closed for days, cutting off people's access to cash transfers.

Even before fighting began, the region had been reeling from a locust outbreak, one of its worst in decades, that had destroyed vast swathes of cropland.

The US, meanwhile, has called for safe passage for the roughly 1,000 foreign citizens and aid workers, Americans among them, who have been trapped in the country since fighting erupted.

"We do not know if there will be additional U.N.-coordinated relocation efforts out of Tigray,'' the US embassy said in a brief statement on Tuesday. "U.S. citizens who cannot depart Tigray safely are advised to shelter in place.''

Dozens of people have been killed in "gruesome attack" in western Ethiopia, the national human rights body said. The area has seen a spate of deadly assaults on civilians along with a worsening conflict in the north.