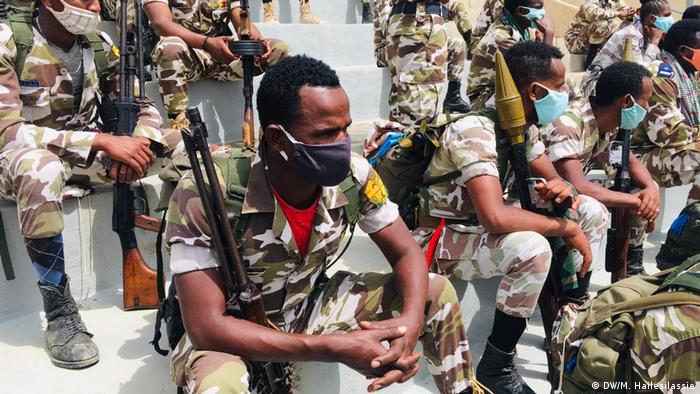 August 10, 2020: Tigray special forces at a military parade. Currently the region is under a communications blackout

Amnesty International on Thursday confirmed reports of a "massacre" of civilians in northern Ethiopia's Tigray region.

"Scores, and likely hundreds, of people were stabbed or hacked to death in Mai-Kadra town in the South West Zone of Ethiopia's Tigray Region on the night of November 9," the rights group said in a report.

Citing witnesses interviewed and "verified" photo, video and satellite imagery, the human rights group said bodies had been "strewn" across the town. Fighting between the Tigray People's Liberation Front (TPLF) party and the government of Prime Minister Abiy Ahmed has been ongoing for a week now. 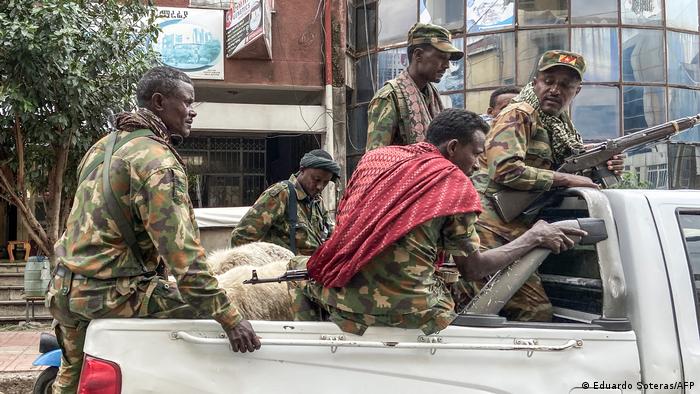 Members of the Amhara militia that fight alongside federal forces

Declining to identify who was responsible, Amnesty did however cite witnesses who alleged that Tigray special police members had used weapons such as knives and machetes, after a local defeat by Ethiopian EDF federal forces.

"There were no signs of gunshot wounds," said Amnesty in its statement, citing witnesses as saying bodies were found on central streets and at "rental dormitories frequented by seasonal workers."

Tigray's leader Debretsion Gebremichael, who chairs the TPLF, denied his forces had been involved in Mai-Kadra killings

All parties to the conflict must ensure 'paramount' protection of civilians, he said, adding that Ethiopian communications across Tigray remained "shut down."

Prime Minister Abiy Ahmed in a Facebook message Thursday claimed that federal forces had "liberated" the western part of Tigray, a mountainous region comprising six zones and a population of 5 million.

Tigray's Debretsion Gebremichael called on the population to defend itself. Tigray TV claimed jets had bombed the Tekese hydroelectric dam, a structure completed in 2009 with Chinese involvement and set in a deep gorge.

Abiy ordered military operations on November 4, accusing the TPLF of attacking federal camps, a claim denied by the party.

But access to the region is restricted, explains journalist Samuel Getachew, who is based in the capital Addis Ababa. "We believe there are more killings because of [what] the people that have moved to Sudan are telling us. And it's just a horrifying incident with too many people dying and many people being affected," he told DW on Friday.

"Organizations are complaining they can't even transport basic food and all kinds of stuff. So the impact without us verifying it, we can only guess it's even worse than assumed."

Inside Tigray, more than 2 million residents are dependent on humanitarian aid, estimates the UN. Some 11,000 Ethiopians have already sought refuge in neighboring Sudan.

UN High Commissioner for Human Rights Michelle Bachelet expressed alarm at the rapidly deteriorating situation, warning of a risk that the situation "will spiral totally out of control, leading to heavy casualties and destruction, as well as mass displacement."

Bachelet is also calling for a full inquiry into the conflict, and has appealed to both sides to begin talks to end hostilities.

Across Ethiopia as a whole, some 15 million people are dependent on humanitarian aid, amid a total population of 112 million.

"When a fighter jet flies over you, it is a concern not only for me, but also for elderly people and children. I believe it is better to create a situation propitious to negotiation."

"I fear that this crisis will have catastrophic humanitarian impacts for the whole country," said Lenarcic, and referring to the Horn of Africa added: "The military escalation in Ethiopia threatens the stability of the whole country and the region.

Despite an African Union call for an immediate stop to fighting, Ethiopia's government asserted Thursday that TPLF "cruelty" could not be "re-dressed" at the negotiating table.