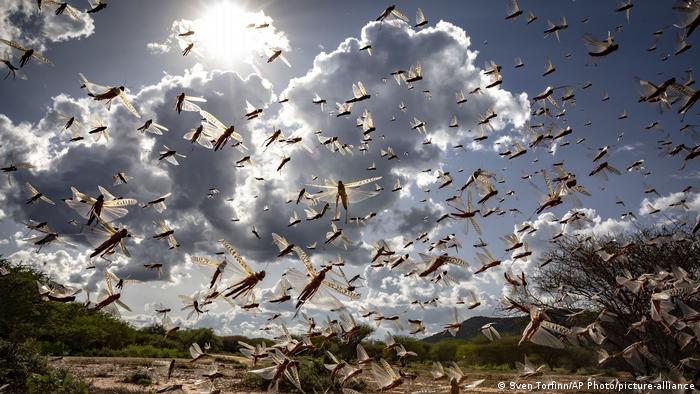 As the rainy season approaches in southern Africa, fears are rising of a locust infestation. This year, a similar plague swept through East Africa, with swarms decimating grasslands and trees.

Namibia, Botswana, Zimbabwe, Zambia and most recently Angola have already been affected. The livelihoods of farmers and cattle herders, who are already dealing with food shortages caused by a crippling drought, are at stake.

Experience of the locust plague in East Africa has shown that both regional cooperation and finances are lacking, making it even more difficult to stop the insatiable swarms. 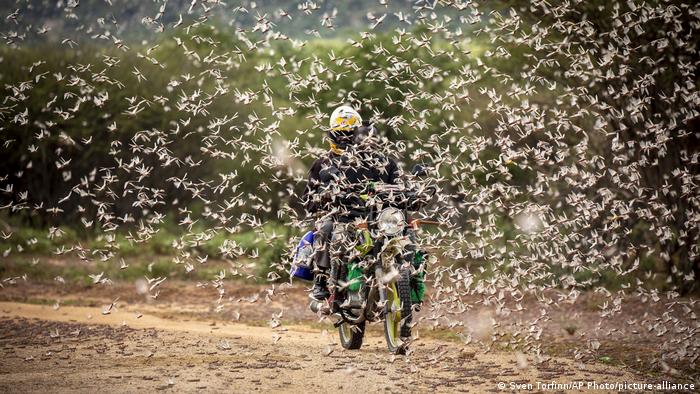 Kenya was badly hit by a locust plague earlier this year

As farmers prepare to plant their crops ahead of the November rainy season, newly hatched locusts are lying in wait. This means the already strained humanitarian situation in Zimbabwe is likely to get even worse.

"The harvests in May were bad," Regina Feindt from the German NGO Welthungerhilfe told DW from Zimbabwe. "The country has been going through a two-year long drought, and the economy is on its knees."

The lockdown measures implemented to stem the coronavirus pandemic have not helped matters, either.

"The Ministry of Agriculture does not have enough insecticides and has already asked us if we can deliver these," Feindt adds.

Meanwhile in neighboring Zambia, the locust infestation has spiralled. The FAO emergency plan involves Zambia and affected neighboring countries identifying and monitoring hotspots better. This includes killing the locusts before they can gather in swarms.

The FAO has made technology and funds available so that the locust swarms can be subdued with chemicals. However, topping-up stocks of insecticide remains a major challenge. 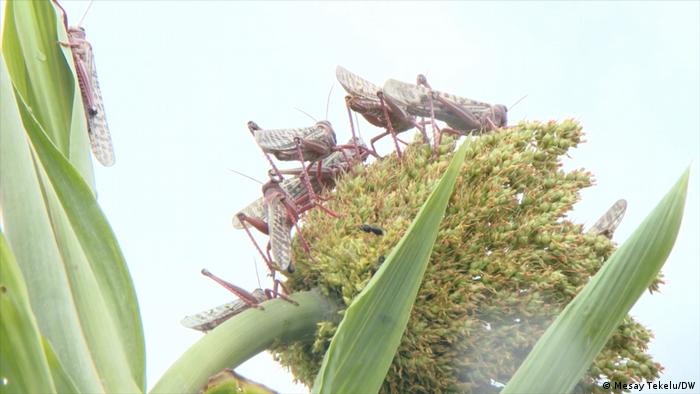 Namibia also urgently needs insecticides, says Farayi Zimudzi, leader of the FAO-bureau in Windhoek. Because most of southern Africa buys insecticides from the same supplier, deliveries have been delayed. But time is running out, particularly in Namibia's eastern Kavango and Zambezi regions.

"Food security will be seriously impacted because newly planted crops and any crops that are currently standing in the fields right now are at risk of being totally annihilated," Zimudzi told DW.

Read more: How East Africa is fighting locusts and coronavirus

An early warning system would be a major weapon against locust invasions, but monitoring is difficult in remote areas, Zimudzi adds.

Frances Duncan, head of the University of Witwatersrand's Institute for Animal, Plants and Environmental Sciences in Johannesburg, sees the situation more critically.

Theoretically, FAO member states pay scientists over time to monitor rural and farming areas. The body of work produced is used to create models which monitor climate, rainfall and cyclones.

This information is vital in predicting the probability of locust plagues. However, "when there are no locusts around, governments tend to forget that this is a problem," Duncan told DW.

"Recently member countries have actually not paid and there's no money to have people surveilling," she explains. 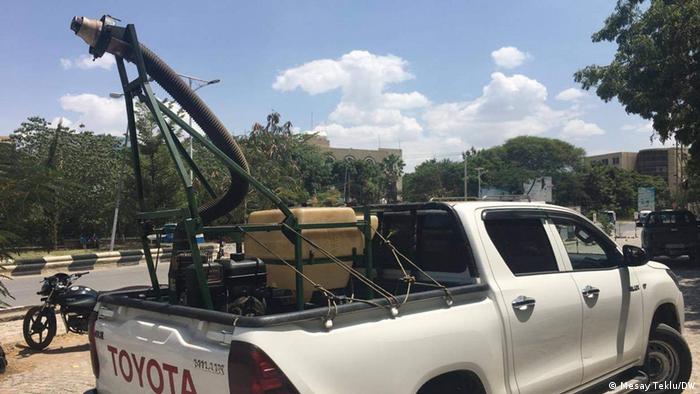 Pick-up trucks modified to spray insecticides have helped slow locust invasions, but they are in short supply

This cost-cutting can prove expensive in the long run. Detecting locust swarms early and taking action means swarms can be destroyed in their infancy when the hatchlings can only hop, covering just two or three kilometers a day. This is a far cry from the capabilities of adult flying locusts, which can cover hundreds of kilometers.

"When we have people on the ground looking to see what the local populations are doing, then we can try and chemically control them before they actually reach plague status," says Duncan.

This would require farmers to develop a centralised system where observations from remote rural areas can be shared quickly and action can be taken.

For Duncan, the lesson from East Africa is clear: Regional cooperation across borders is essential to stamping out locust infestations.

Atinkut Mezgebu Wubneh speaks from experience. The head of Agriculture and Rural Development of Tigray in northern Ethiopia has first hand knowledge of coordinating an inter-regional effort to stop a locust plague

"The sustainable solution is that the remedial measures can't be done separately. The countries should come together and act in a well-organised way," he told DW. "Otherwise it is difficult to combat the desert locust as the insect moves across countries."

This article was translated from German by Cai Nebe.

Why we're seeing the worst locust invasion in decades