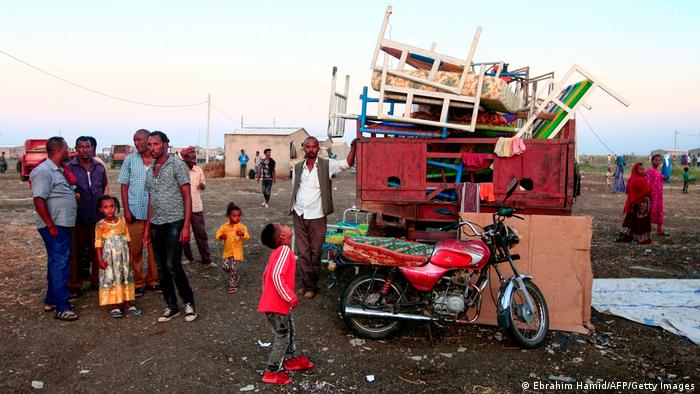 Deadly fighting between Ethiopian federal forces and the regional government of the Tigray People's Liberation Front (TPLF) has already claimed hundreds of military and civilian lives, according to the scarce reports coming from the region.

Internationally, there are fears that the conflict, which is quickly escalating into a civil war, will threaten regional security in the Horn of Africa.

Ethiopian Prime Minister Abiy Ahmed ordered a military operation against the TPLF on November 4, accusing the Tigray militia of attacking a government military base.

"All the TPLF's actions testify to their high level of frustration.They have no more strength, capability and time to intensify wars in the region. The Tigray junta has only a very short time left to be captured," according to Kenna Yadeta, who was appointed defense minister in August 2020 as part of a major — and controversial — cabinet reshuffle by Ahmed.

"We can achieve a crushing victory any day from now," Yadeta told DW. 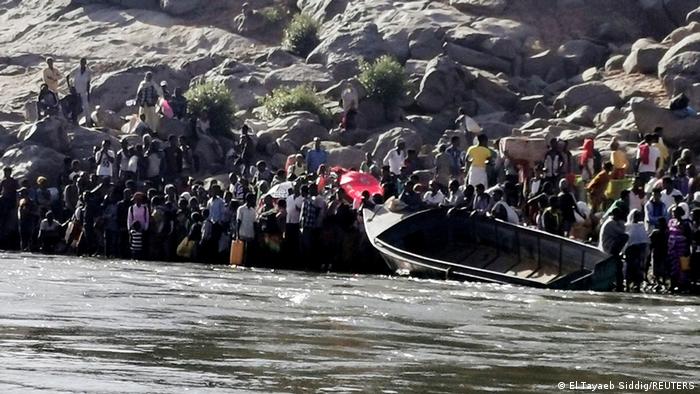 The victory may come at a severe cost to stability in the Horn of Africa, though.

To win it, there is a danger that the federal government's focus on Tigray could weaken its involvement in backing the government in Ethiopia's western neighbor, Somalia, against al-Shabab militants.

Ethiopia has already withdrawn about 600 soldiers from Somalia's western border. However they were not part of the African Union's Mission in Somalia (Amisom), which Ethiopia also supports.

"Now, this is going to severely affect the efforts of the African Union mission that's currently involved in stabilizing Somalia and ensuring there is a functional government, and organize the elections in the next few months,” said Hassan Khannenje of the Nairobi-based think-tank the Horn Institute.

The huge numbers of refugees likely to cross the borders of an already volatile region and the likely proliferation of light weapons and small arms could lead to a "catastrophe," according to Khannenje. "If Ethiopia goes, then there goes the Horn of Africa region. And that's something they should worry everybody, both regionally and internationally," Khannenje told DW.

Conflict spills over into Eritrea

Also complicating the Ethiopian government's conflict with the TPLF is the involvement of Ethiopia's northern neighbor, Eritrea, which borders Tigray.

The TPLF's leader, Debretsion Gebremichael, said his troops fought Eritrean forces "on several fronts" for the past few days. He accused Eritrea of providing military support to the Ethiopian government and sending troops across the border, allegations that Eritrea denied. 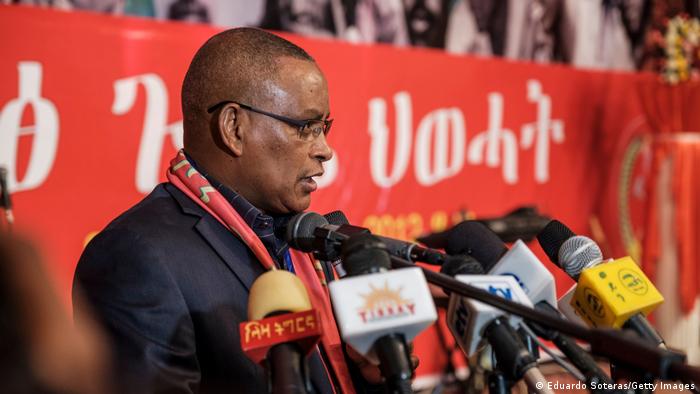 "Asmara has been accused of allowing the Ethiopian Air Force to use its base in undertaking strikes," said Hassan Khannenje, from Nairobi-based think tank, The Horn Institute.

"And so, the TPLF sees Eritrea as a fair target because of its alliance or perceived alliance currently with Abiy Ahmed's government in Addis Ababa."

Tigrayan forces and leaders were instrumental in bringing peace and relative prosperity to Ethiopia as part of the Ethiopian People's Revolutionary Democratic Front (EPRDF) by removing the brutal Derg military regime from power in 1991.

However, under its rule, Eritrea seceded in 1993, and the 1998–2000 war between Ethiopia and Eritrea followed.

When Abiy Ahmed swept to power in 2018, he made it a priority to normalize relations and make peace with Eritrea — a feat that won him the Nobel Peace Prize in 2019.

The TPLF's resentment stems from a sense of being sidelined by Abiy's government when he formed a new coalition government — known as the Prosperity Party — which excluded the TPLF. Abiy's overtures to Eritrea are also seen as a betrayal. 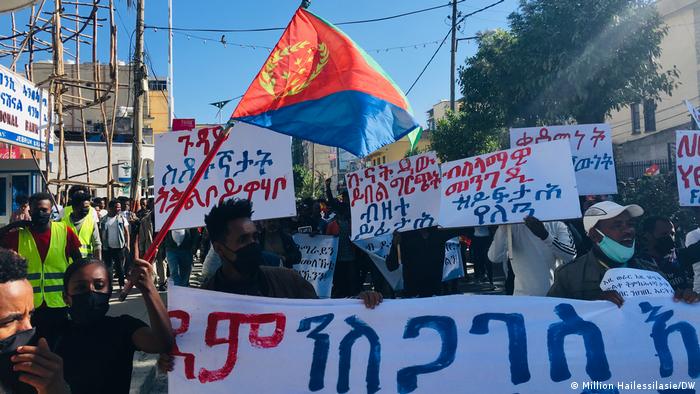 Thousands marched against a war in Ethiopia's Tigray region

But many Eritreans want peace between Eritrea and Ethiopia.

Over the weekend, hundreds of Eritrean refugees in the Tigray city of Mekelle protested against the war between Tigrayan and Ethiopian government forces.

They demanded both sides end the conflict immediately and strike up dialogue.

"The war is unnecessary. We know war. It's destructive. War between brothers is the worst. People have been persecuted and killed. The Eritreans here are against the war. It's enough!" said one male demonstrator. 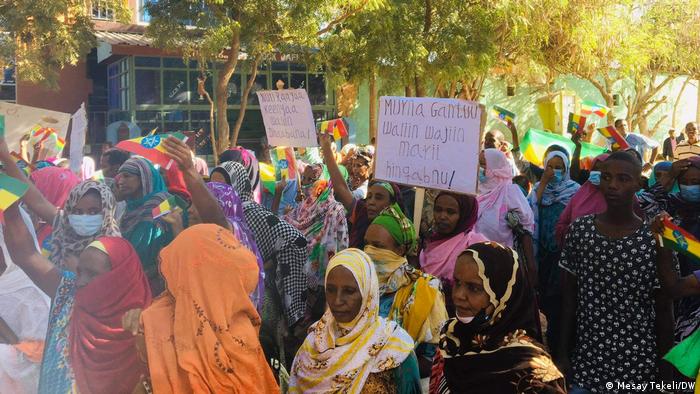 Protests against the war have started in Tigray

Others fear Eritreans living in Tigray could also become targets.

"Since we've been in Ethiopia, especially Tigray, we have found shelter and live like every other citizen," a protestor told DW. "This war doesn't just affect civilian life, it also affects us, the refugees."

Both countries are in dispute with Ethiopia, over its Grand Renaissance Dam on the Blue Nile.

Sudan and Egypt both claim the structure will adversely affect their water supply.

The exercises include planning and running combat activities, as well as commando groups conducting search and rescue missions, according to an Egyptian defense ministry statement.

Ethiopia's prime minister has said government troops will launch a major offensive in the Tigray region after a surrender deadline elapsed. His remarks came after the army carried out airstrikes on the regional capital.

Dozens of people have been killed in "gruesome attack" in western Ethiopia, the national human rights body said. The area has seen a spate of deadly assaults on civilians along with a worsening conflict in the north.