Ethiopia has 'entered into war' with Tigray region

The conflict in Ethiopia's northern Tigray region has intensified as the army said it had been "forced into war." There are rising fears that the fighting may spill into other regions of the country. 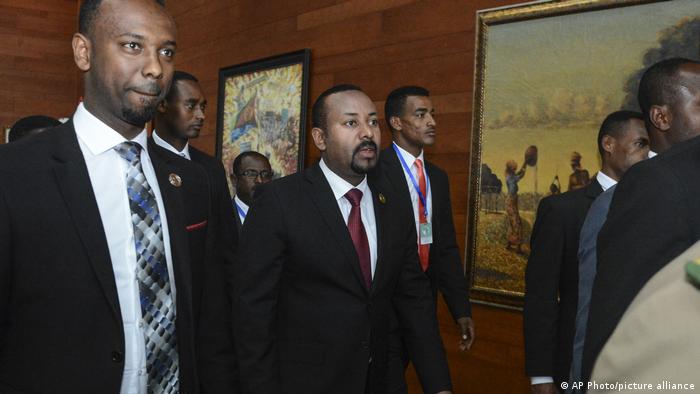 The Ethiopian army on Thursday said the country had been pushed into an "aimless war" with its northern Tigray region, which in turn said that areas around its capital were being bombed by fighter jets.

The conflict in the region continued to escalate despite international calls for talks to calm the crisis.

Birhanu Jula, the army's deputy chief, said that soldiers from other parts of the country were being sent to fight in the region.

"The army will not go anywhere," Jula said, amid concerns of the conflict spilling into other regions. "The war will end there."

What did authorities in Tigray say?

The regional government of Tigray said on Thursday that airstrikes were being carried out in areas around its capital — a claim that could not be independently verified due to an ongoing internet and phone blackout in the region.

"Some jets have bombed locations around the regional capital, Mekelle, today. We understand the purpose of the attack is to force the region into submission," the government said in a statement on Tigray Television.

The Ethiopian government has not yet commented on the bombing allegations.

Prime Minister Abiy Ahmed sparked fears of a civil war when he announced Wednesday that soldiers were being sent into Tigray to quell an alleged uprising by the region's separatist group Tigray People's Liberation Front (TPLF).

Each side claims defection

"The Ethiopian army's northern command has sided with the people of Tigray," he said.

"We are in a position to defend ourselves from enemies that waged war on the Tigray region…We are ready to be martyrs," Gebremichael said.

Deputy chief Jula made the exact opposite claim, asserting that members of the separatist group, Tigray People's Liberation Front are "fleeing and joining the army; those injured are receiving medical treatment.''

He said that government forces were targeting the TPLF force and trying to avoid civilian casualties.

What is the conflict in Tigray about?

Tigray is a heavily armed region in northern Ethiopia that played a dominant role in the country's government and military. Its power has waned since Abiy took power in 2018.

The federal government declared a six-month emergency in the region, fueling tensions between government authorities and the TPLF.

The row escalated in September when Tigray held regional elections in defiance of the federal government, which called the vote "illegal".

The International Crisis Group warned last week that Abiy's government and the TPLF were "barreling toward a major crisis".