The German singer-songwriter and famous former East German dissident Wolf Biermann turns 85 on November 15. A look back at his eventful life.

After being forbidden to perform publicly for 11 years by the East German authorities, on November 13, 1976, Wolf Biermann was surprised to be allowed to travel to Cologne for a concert. That night, sitting on a bar stool with is sleeves rolled up, solely armed with his wooden sword — a guitar — he mocked and protested against the German Democratic Republic (GDR) to a crowd of 7,000 people.

Although the singer-songwriter was not allowed to distribute his recordings, his songs were so popular in West Germany that they had found their way back into the GDR through clandestine copies.

Three days later, still on tour in West Germany, Biermann learned while listening to the radio that he would be deprived of his East German citizenship for betrayal and defamation of the GDR. 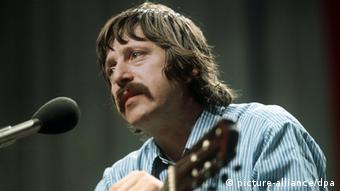 Wolf Biermann in Cologne in November 1976: He didn't even play his most critical songs — out of caution

"I felt cast away," he wrote about the anxiety the news provoked in his memoirs, titled "Wolf Biermann: Warte nicht auf bessre Zeiten!" (Do not wait for better times).

The book brings readers on a poetic journey through his eventful life as one of the most famous East German dissidents.

His expatriation triggered protests. A petition to the government was signed by the GDR's most important intellectuals, such as Stephan Hermlin, Christa Wolf, Stefan Heym, Günter Kunert, Heiner Müller and Jurek Becker. It made the regime nervous, and surveillance, work bans and arrests increased.

Stars such as actors Manfred Krug and Armin Mueller-Stahl left the country. "The East German authorities were expecting an angry media reaction from the West, but they didn't expect that a group of recognized authors and artists from the GDR would protest for the first time publicly through a petition," wrote Biermann in his autobiography.

At the time, he didn't know that the authorities had decided to strip him of his citizenship long before the first West German concert, even though what he said on stage was used as the official justification afterwards.

The GDR, the country he had chosen as his home — he had emigrated there from Hamburg to pursue his communist ideals — and where he had lived for 23 years, no longer wanted him.

Parents made Biermann a Communist

Biermann owed his communist allegiance to his parents. His father Dagobert was a shipyard worker, communist and Jew who had resisted the Nazis and landed in prison.

His mother, Emma, wanted the young boy to remember his imprisoned father and hid a little present every day in his name. Whenever the little Wolf would find these small toys or candies, she would explain that his father had sent them "through the moon beam."

When his father was deported from prison to Auschwitz and murdered there in 1943, his death certificate landed without a stamp in Biermann's mailbox. "An absurd joke from the Holocaust," wrote Biermann.

Communism and anti-fascism were inculcated in Wolf Biermann almost religiously. He was 6 years old when he escaped the Allied bombing of Hamburg during World War II. "My mother had only one goal since these dark times," he recalls, "I should survive in order to avenge my father and build communism."

The German Democratic Republic, which welcomed him at the age of 16, became a land of hope, a "fatherland," as he describes it, or the opportunity to create paradise on Earth. His deceased father remained the guardian of his faith in "true" communism.

In East Berlin, Biermann studied economy, math and philosophy. Bertolt Brecht became his greatest influence. "I licked, I chewed, I swallowed and I enjoyed the great poet," wrote Biermann.

He started working as an assistant theater director at the Berliner Ensemble. The theater would become a turning point in his life. He would start playing his own songs — which also pleased the composer Hanns Eisler, who had long been Bertolt Brecht's musical and political associate.

Biermann grew a mustache and turned out to be quite a womanizer. Altogether, he became the father of 10 children.

His love affair with East Germany, however, dwindled quickly. When he planned to stage a play dealing with the construction of the Berlin Wall in 1963, the government closed down his newly founded Workers' and Students' Theater.

In 1965, GDR authorities also prohibited him from performing publicly and publishing his works.

Even though Biermann's East Berlin apartment was bugged and under surveillance, it became a meeting point for critics of the regime. It felt to him like "the waiting room for the world revolution," he wrote about that period.

He was still giving concerts. His bitter songs provided hope to fellow dissidents. His song "Ermutigung" (Encouragement) became the hymn of the oppressed in East Germany, where he encouraged everyone "not to harden in these hard times; not to embitter in these bitter times; not to get frightened in these frightening times."

He saw blind loyalty to the East German regime as betrayal of communism and the revolution. The Ministry of State Security, the Stasi, feared the influence of his bold texts. By then, Biermann had released six LPs and several poems in West Germany. He was so popular that it protected him from imprisonment. 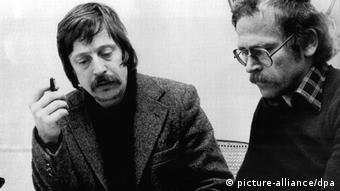 Even after losing his citizenship, Biermann kept believing in communism — but not in the GDR. He finally broke with the ideology in 1983. "And that was the decisive jump in my life," he wrote. Communism, he added, "is a way through hell to force paradise on Earth" and is a social idyll that requires oppression and exploitation.

To this day, Biermann has remained an outspoken critic.

As he won the Ovid Prize for his lifetime achievement in October, he passed it on to imprisoned Belarusian activist Maria Kolesnikova, as a sign of solidarity with the work of those who are fighting against the regime of Alexander Lukashenko.

He is currently touring Germany, and has just published a book, "Mensch Gott!" (Man God!), which is a collection of his songs and texts from the past six decades.

Ahead of his 85th birthday on November 15, Biermann said, in a reference to Jewish lyricist Robert Gilbert, that he was in no rush to join the angels.

This article was translated from German and was updated on November 15, 2021.

In East Germany, the singer-songwriter was a figurehead of the political opposition. After he was forced into exile in 1976, Wolf Biermann started anew in West Germany — but always remained true to himself.