French President Emmanuel Macron received the Charlemagne Prize in Aachen "in recognition of his vision of a new Europe." In his acceptance speech, Macron described his long-term goals for the European bloc. 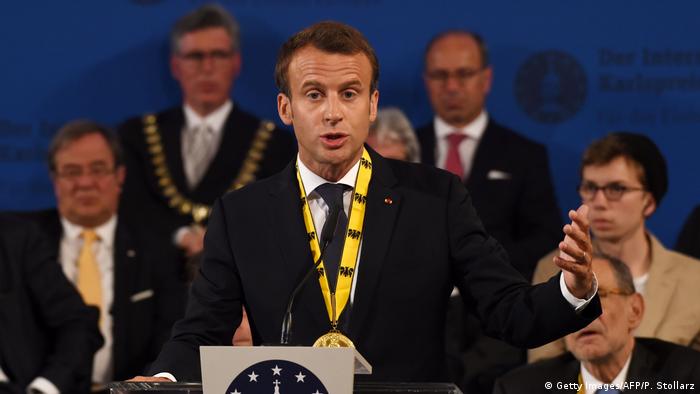 French President Emmanuel Macron was recognized for his contributions to European cohesion and integration on Thursday, as he received the Charlemagne Prize in the German city of Aachen.

In his acceptance speech, Macron praised the European project for maintaining a "miraculous" 70 years of peace on the continent and outlined his vision for the future.

The French president called for more unity among member states and warned that the divisions that appeared during the eurozone and migrant crises risked undermining the EU project.

Macron insisted that a common eurozone budget was crucial to guaranteeing EU unity. He urged Germany to get over its "fetish" for budget surpluses and work with him on forging deeper economic co-operations.

"We need an ambitious European budget and a eurozone with its own budget allowing for investments and convergence between member states," he said. "We have to fight for a new and stronger Europe ... Now is the time."

Macron also called for a stronger Europe on the diplomatic front. "Europe has to take its fate into its own hands," the French president said. "Because one country breaks its promise doesn't mean we have to change our course," he added, implicitly referring to the US' decision to quit the Iran nuclear deal.

"If we let others decide our policies for us, then we are not creditable anymore, and our populations will not be seen creditable either."

The board of directors for the Charlemagne Prize said they were honoring Macron "in recognition of his vision of a new Europe" and his "decisive stance" against nationalism and isolationism.

The bishop of Aachen, Helmut Dieser, opened the ceremony in Aachen Cathedral, congratulating Macron for winning last year's French presidential election on a pro-European platform. "We therefore offer you all our respect and gratitude," the bishop said.

The annual Charlemagne Prize commends public figures who promote European unity. It is named after the Charlemagne, who in 800 AD took up the role that would later come to be known as the "Holy Roman Emperor," launching a series of wars and political reforms to build a continental European empire.

German Chancellor Angela Merkel gave a speech in Macron's honor during the prize giving ceremony, praising Macron's "contagious enthusiasm" for the European project. "He has clear ideas on where and when Europe needs to evolve and has the capacity to inspire young Europeans," she said.

The German chancellor also commended Macron for defending the values of freedom and cohesion at a time when "authoritarian ideologies are luring people back to the past."

Merkel stressed the need for a strong pan-European foreign policy, because the bloc could no longer rely on the US to "protect it."

In light of the US' decision this week to quit the Iran nuclear deal and Thursday's confrontation between Israeli and Iran-backed forces in Syria, the chancellor described the situation in the Middle East as "truly a matter of war and peace."

In an interview with DW on Wednesday, Macron said he had "a lot of hope" that the two sides would agree on a common EU plan. "I think that the chancellor and her government are going to join us in this historic moment and work together for a stronger Europe and a more united and more sovereign and more democratic Europe," the French president said.

A study published on Wednesday by German broadcaster ARD found that a majority of Germans support Macron's proposed EU reforms, but thought that his plans for deepening EU economic and financial cooperation went too far.

Political analysts, however, were not hesitant to point out that Macron's award comes despite his proposed EU reforms having so far gained little traction.

Macron has made a series of prospective EU reforms one of the focal points of his presidency. Notable goals include the creation of a common eurozone budget and a European finance minister post, a joint military "rapid reaction force," and a new EU tax regime targeting internet technology giants.

However, the French president has far from won unanimous support for his lofty policy plans. His ambitions for the eurozone face particularly stiff resistance from Germany, and especially from within Merkel's own conservative Christian Democratic Party.

Nevertheless, Macron and Merkel have promised to present a common roadmap on the future of the EU ahead of the next major leaders' summit in Brussels in June.