In a speech to Germany's parliament, French President Emmanuel Macron has called for a new Franco-German alliance to equip Europe for future challenges. His visit came on Germany's annual war remembrance day. 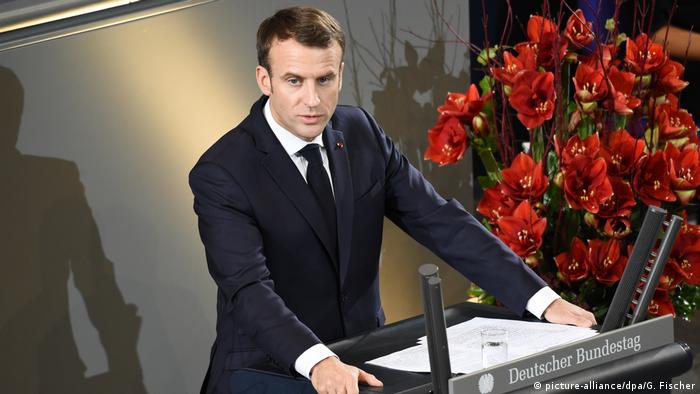 French President Emmanuel Macron told German lawmakers on Sunday that it was up to France and Germany to build a modern, efficient, democratic Europe fit for the future.

In a speech to the Bundestag to mark Germany's Day of Mourning for those killed in war, Macron said that Germany and France had overcome 200 years of "merciless wars" to make a "lasting peace" and "cement a bedrock of cooperation in all fields."

Acknowledging that Europe faces multiple challenges from climate change to migration, the French leader said only the two neighbors' partnership, as part of a unified, more sovereign Europe, could help the world avoid sliding into chaos.

"Europe, and within it the Franco-German alliance, have the obligation ... to guide it on the road to peace," he added.

Urging Europe to take more responsibility for its defense and security, Macron said the continent must not "become a plaything of great powers ... and must not accept a subordinate role in world politics."

Macron then paid tribute to Germany's post-World War II record, saying that "no other country has scrutinized its history with so much sincerity and tried to learn its lessons. You decided to never stop trying to overcome ancient quarrels and to work tirelessly for peace."

The French president's speech was one of a series of events in Berlin on Sunday to mark the Day of Mourning. Earlier, alongside German Chancellor Angela Merkel and President Frank-Walter Steinmeier, Macron took part in a wreath-laying ceremony at the city's Neue Wache memorial to remember those killed in war. He also addressed a youth peace conference featuring young delegates from 48 countries in Europe. 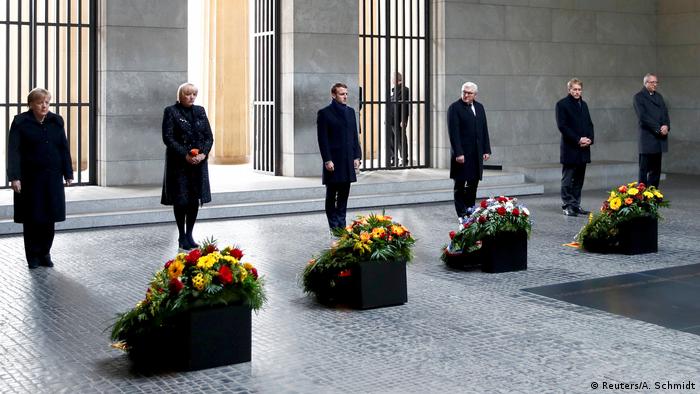 Germany's commemorations come a week after the centenary anniversary of the World War I armistice, which saw poignant ceremonies in Paris and London.

Germany and France agreed on Friday on a proposal for a common budget for eurozone member states within the EU's overall budget, according to a document seen by the German dpa news agency.

The reforms have been hailed as a way to make the euro area more resistant to financial and economic crises. Merkel said on Sunday at a press conference with Macron that the time had come to "really deliver" on European reforms.

Merkel and Macron were also expected to further discuss plans for a future European army, an idea that last week led to a war of words between Macron and US President Donald Trump.

Germany has backed the proposal, although Dutch Prime Minister Mark Rutte on Friday accused the two countries of jumping the gun, asserting that the continent's safety could be guaranteed only through NATO.

Europe should keep its defense within NATO, says Stoltenberg