The European Commission has for the first time ever rejected the budget of a member state, as it said the spending plans of Italy's populist government were violating the bloc's debt limit and needed revision. 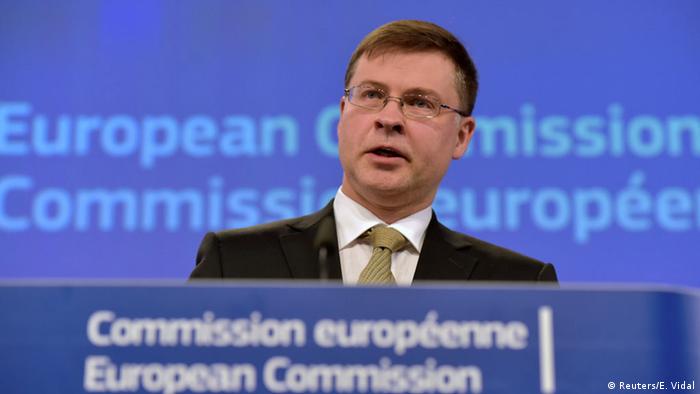 The European Commission (EC) on Tuesday demanded unprecedented changes to the Italian draft budget for 2019, urging the populist government in Rome to bring their spending plans in line with the bloc's fiscal rules.

"Today for the first time the Commission is obliged to request a euro area country to revise its draft budgetary plan," said EC Vice President Valdis Dombrovskis, adding that the bloc's executive arm saw "no alternative" to the rebuke.

The decision by the Commission is the first time it has exercised the power, obtained during the sovereign debt crisis in 2013, to send back a budget of a eurozone country that violates the rules.

At the same time, Brussels asked Rome to submit a new 2019 draft budget within three weeks, threatening Italy with disciplinary action if it didn't comply with the demand.

Read more: How will the EU-Italy budget standoff be resolved?

The budget standoff between Brussels and Rome has intensified in recent weeks because the Italian government, made up of the anti-establishment 5-Star Movement and the far-right League, insisted on tripling the country's fresh borrowing from 0.8 percent of gross domestic product (GDP) to 2.4 percent next year.

Brussels argues the hike would far exceed the spending limits agreed with the EU and further increase Italy's national debt, which is already the highest in the EU.

The Italian government immediately replied to the budget rejection on Tuesday, saying it would stick to its budget plans and that the EU had no right to meddle in Italy's affairs.

"They're not attacking a government but a people. These are things that will anger Italians even more and then people complain that the popularity of the European Union is at its lowest," Salvini, who's also the League leader, told journalists during a visit to Romania.

The head of the 5-Star Movement, Luigi Di Maio, posted on Facebook that the government knew it was "on the right path," which was why it wouldn't stop. "We know that we are the last bastion of Italians' social rights. That's why we won't disappoint you. We know that if we give up, the pro-bank and pro-austerity 'experts' will return," he wrote.

And Italian Prime Minister Giuseppe Conte also vowed Rome would resist the pressure from Brussels, admitting, however, that the government had no "Plan B" for its budget.

"There isn't any B plan," Conte said in an interview with Bloomberg News on Tuesday. "I said that the deficit at 2.4 percent of GDP is the cap. I can say this will be our cap."

Conte also noted that the government was willing to "reduce" some spending and "operate a spending review if necessary." Still he insisted that economic growth was "the best way in order to take us out of a debt trap."

According to EU data, Italian debt stands at 131.2 percent of GDP — the second-highest ratio in the EU after Greece. The country's debt servicing cost is the highest in the bloc, amounting to about €65.5 billion ($75.21 billion) or 3.8 percent of GDP in 2017.

The government, however, is convinced that its additional spending will boost economic growth, helping reduce the debt-to-GDP ratio. It wants to kick-start Italy's sluggish economy with a basic income for the poor and tax cuts for corporations.

But the Commission said the growth assumptions were overly optimistic, which also made Italy's debt reduction questionable.

"Experience has shown time and again that higher fiscal deficits and debt do not bring lasting growth. And excessive debt makes your economy more vulnerable to future crisis," Dombrovskis said.

Under EU rules, the next step facing Rome is an "excessive deficit procedure" to be opened by Brussels if Italy continues to defy the EU. That could end with financial sanction in 2019.