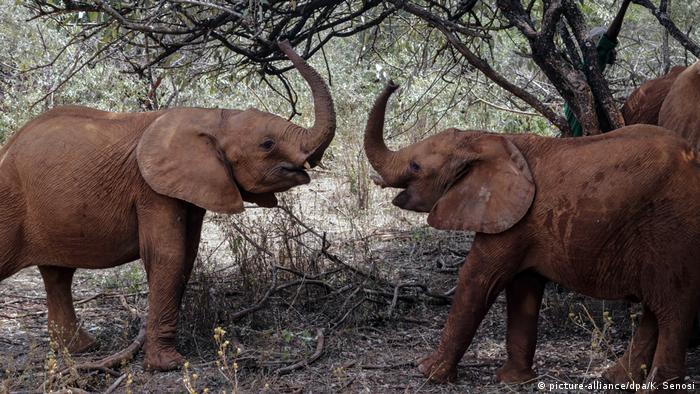 Efforts to curb poaching have helped Kenya's elephant population more than double over the past three decades, the Kenya Wildlife Service (KWS) announced on Wednesday.

There were just 16,000 elephants in Kenya in 1989, but by 2018 that number had grown to more than 34,000, KWS Director John Waweru said during a visit to Amboseli National Park to mark World Elephant Day.

"In the past couple of years, we have managed to tame poaching in this country," Kenya Tourism Minister Najib Balala told reporters at the event.

As part of the event, Balala helped to tag a bull elephant and named a pair of twin calves.

"Today we are also launching the Magical Kenya elephant naming campaign, an annual festival whose objective will be to collect funds from the naming, to support the Rangers welfare," Balala said, referring to the armed guards whose task is to deter poachers. "This year alone, about 170 elephant calves have been born."

The threat of poaching

Across Africa as a whole, however, the figures tell a bleaker story. Poaching has had a devastating impact the continent's elephant population over the decades. Africa was home to 1.3 million elephants in the 1970s, but today has only around 500,000. Less than 30,000 elephants are estimated to remain in the wild.

Kenya and other sub-Saharan African countries in recent years saw a surge in poaching, driven by a demand in Asia for ivory and rhino horns that are used in traditional medicine.

The Kenyan government has made a public show of its efforts to curb poaching. In 2016, President Uhuru Kenyatta set fire valuable stockpile of elephant tusks and rhino horns to send a message to smugglers. The government has also instituted heavier fines and stiffer jail terms for anyone convicted of poaching wildlife or trafficking in wildlife trophies.

Protecting South African wildlife from poaching during the coronavirus pandemic

In South Africa, the Mala Mala game reserve is fighting against increased poaching together with their local staff.

In the Samburu conservancy, women use the traditional art of beadwork to create an income for their families and to protect the wildlife around them.

A community-run conservation area in northern Kenya is protecting critically endangered black rhinoceros and reaping the rewards of tourism dollars.