Kenyan President Uhuru Kenyatta has set fire to 105 tons of elephant ivory. He demanded a total ban on trade in ivory to end trafficking and prevent the extinction of elephants in the wild. 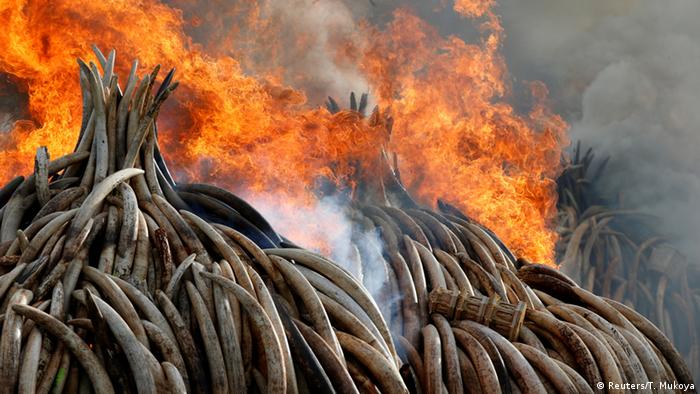 "The height of the pile of ivory before us marks the strength of our resolve," Kenyan President Uhuru Kenyatta said on Saturday before setting fire to the pyres in Nairobi National Park. "No one, and I repeat, no one, has any business in trading in ivory, for this trade means death of our elephants and death of our natural heritage."

He set fire to 105 tons of elephant ivory and more than one ton of rhino horn, believed to be the largest stockpile ever destroyed.

Before this dramatic statement against poaching, he demanded a total ban on trade in ivory to end the "murderous" trafficking and prevent the extinction of elephants in the wild.

Kenya plans to push for the total ban on trade in ivory at the 17th meeting of the Convention on International Trade of Endangered Species in South Africa later this year.

According to Kenyan wildlife authorities, illegal ivory smuggling in Africa and the killings of elephants and rhinos increased after the temporary lifting of a ban on trade in ivory in 2007.

Worth more than gold

But the Kenyan president criticized those who put cash value on the ivory.

"For us, ivory is worthless unless it is on our elephants," Kenyatta said.