Germans go to the polls in a general election on Sept. 27. For all the latest news as well as extensive background coverage, visit DW-WORLD.DE's Election 2009 dossier. 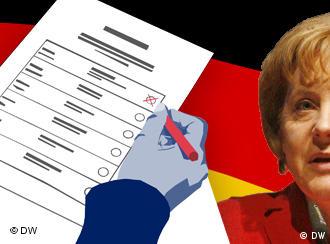 Germany's next general election will be held on Sept. 27. The contest is emerging as a face-off between the two grand coalition partners - the Christian Democratic Union (CDU), headed by Chancellor Angela Merkel, and the Social Democratic Party (SPD), whose candidate for chancellor is Foreign Minister Frank-Walter Steinmeier.

Merkel has stated that it's her goal to win a majority for the conservatives (made up of the CDU and its Bavarian sister party, the Christian Social Union), and their traditional coalition partner, the free-market liberal FDP. Opinion polls indicate that the CDU/CSU and FDP together hold a substantial lead over the SPD and their usual coalition partner, the Greens. But the SPD has overcome similarly large gaps in the past and is determined to do so again. Click on the links below for DW-WORLD.DE's election coverage.

German Foreign Minister Frank-Walter Steinmeier, who faces off with Angela Merkel in next month's parliamentary elections, has pledged to create millions of jobs. It is drawing sharp criticism from rivals. (02.08.2009)

German Chancellor Angela Merkel has called for unity among squabbling conservatives in the lead-up to September's elections. Merkel is relying on Bavarian conservative Horst Seehofer to help put her back in office. (18.07.2009)

"To the German people," reads the inscription over the main door of the Reichstag, Germany’s parliament building. Together with the upper house of parliament, the Bundesrat, the parliament passes the country's laws.

For a long time, the German political palette was dominated by black, red, and yellow. But then green and - most recently - dark red were added to the mix. DW-WORLD.DE explains what's behind the colors.

In September, Germans will elect a new parliament. Today, the country can look back on a checkered history of Bundestag elections since the German Federal Republic was founded in 1949.

A quick guide to German elections

On the surface, the German electoral system is similar to that of most other Western countries, although it does have its own quirks and peculiarities. DW-WORLD explains.