Poll: Most Germans expect Angela Merkel will continue as chancellor | Germany| News and in-depth reporting from Berlin and beyond | DW | 19.07.2009

With 10 weeks to go until the German elections, a new poll give a glimpse as to what Germans may decide on election day. Right now, all bets are on current Chancellor Angela Merkel keeping her job. 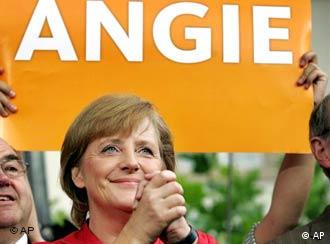 Chancellor Merkel's latest poll numbers are worth smiling about

As Germany gears up for nationwide elections on September 27, the latest poll released by Emnid reveals that 80 percent of German citizens expect conservative Chancellor Angela Merkel of the Christian Democratic Union (CDU) to remain in office for a second term.

"We have not measured such a high approval rating for an incumbent chancellor in decades," the head of Emnid, Klaus-Peter Schoeppner told the Bild newspaper's Sunday edition. "Especially unheard of is the high expectation of losing among SPD supporters." 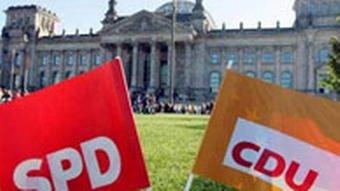 Grand Coalition gets the thumbs down in the polls

Those surveyed give Social Democratic Party (SPD) candidate Frank-Walter Steinmeier only a 13 percent chance of beating Merkel and becoming chancellor. And among SPD supporters, 53 percent do not want to see the party work with the CDU and the CSU coalition.

The poll also demonstrated that 56 percent of Germans would like to see an end to the Grand Coalition, where Merkel's center-right CDU party works together with the Social Democrats.

The SPD has watched its popularity slide in recent years, in part because of Merkel's popularity and its status as a junior coalition member. With such low poll numbers, Frank-Walter Steinmeier and the other top members of the SPD will have to seriously examine their future strategy when they meet in Potsdam at the end of July.

As German conservatives gear up for the elections in the fall, Chancellor Merkel's sister party, the Bavarian CSU with Horst Seehofer at the helm, has pledged to support Merkels CDU. On July 18, Seehofer was re-elected head of the CSU with an almost 90 percent majority.

The CSU however, is pursuing an election campaign that diverges from Merkel's CDU on key issues. The central element of the CSU campaign is income tax cuts, which it has said it will not back down on.

Despite the ongoing crisis and the flurry of negative economic prognoses, the CSU maintains that tax cuts are necessary and feasible. 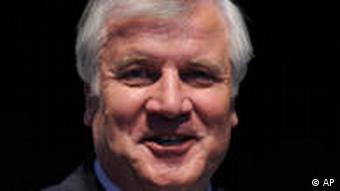 Another controversial issue Seehofer addressed on Saturday was the CSU stance on the ratification of the European Union's Lisbon Treaty.

The CSU has called for the German parliament, the Bundestag, to have more of a say in European affairs. Seehofer says the CSU is not against ratifying the treaty, but rather for strengthening the national parliament on the European level.

"We're not about destruction; we don't want to blockade the treaty. We want to give Germany's houses of parliament a stronger presence. We want Europe to recognize what it is made of - and we want that our national parliament to have responsibility and be taken seriously."

Time will tell whether or not this will be a workable arrangement.

While Germany's larger parties are already stepping up their campaigns, there is a host of less established parties joining the race. One of the parties approved by the Electoral Commission is the Pirate Party. (18.07.2009)

Key ministers warn of a looming credit crunch in Germany

Germany is facing a serious credit crunch later this year, according to two key government ministers, who also hinted at possible central bank intervention to curb the threat. (09.07.2009)