While there's clear evidence to suggest that Germans will be thinking of their wallets when they go to the polls on Sept. 27, many will also spare a thought for environmental concerns. 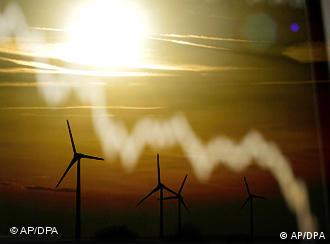 Top concerns: energy and the economy

Chancellor Angela Merkel has generally received good grades for her handling of the financial crisis and many pundits say that will serve her well in the election. With the effects of the crisis still being felt, Germans might decide to stick with a leader who's demonstrated her skills as a crisis manager. Merkel helped spearhead European efforts to increase regulation of global markets and she oversaw the creation of a stimulus package of more than 80 billion euros ($114.4 billion) aimed at spurring economic growth.

Whereas four years ago Merkel pledged bold tax and labor market reforms, now she's keeping things vague. Her election platform advocates modest changes to the tax regime that differ only moderately from what the Social Democrats (SPD) are promising.

The SPD election platform includes a call for tax cuts and state handouts for low income groups and families, to be financed by a tax on the wealthy and a levy on stock transactions. The party has also promised to increase spending on education and job security measures.

Economists have warned that unemployment is likely to increase as the election approaches, with German companies cutting jobs as a reaction to the effects of the global crisis. That means job creation is likely to be a big election issue. The SPD's candidate for chancellor, Frank-Walter Steinmeier, has seized the initiative, declaring that he would bring Europe's largest economy back to full employment, creating four million jobs and ending unemployment by 2020.

Conservative opponents have poured scorn on Steinmeier's "Deutschland Plan," calling it a "desperate move to prop up a moribund SPD." On the job front, the conservatives are promising a "stabilization" of non-wage labor costs for employers and better security for workers who lose their jobs due to the economic crisis.

Energy and the environment

The Green party is hoping to reclaim territory lost in the 2005 election by capitalizing on the fact that energy security and climate change have become major issues.

Both the Greens and the SPD want to stick to Germany's goal of phasing out nuclear power by 2020. The conservatives, on the other hand, want to reverse the phase-out, arguing that nuclear energy is a crucial element in a proper "energy mix." They say that all nuclear plants deemed safe should have their life spans extended.

All the major parties promise support for renewable energies and reductions in CO2 emissions. But, the Greens have boldly declared that they would also introduce a speed limit on motorways. With such a step, Germany could instantly cut greenhouse gas emissions by nine percent, said Green party leader Cem Oezdemir.

German Foreign Minister Frank-Walter Steinmeier, who faces off with Angela Merkel in next month's parliamentary elections, has pledged to create millions of jobs. It is drawing sharp criticism from rivals. (02.08.2009)