Egyptian authorities tighten security in Cairo amid calls for protest

Tahrir Square has been sealed off, and authorities have tightened security across Egypt amid calls for new demonstrations against the government. More than 2,000 people have reportedly been arrested since last week. 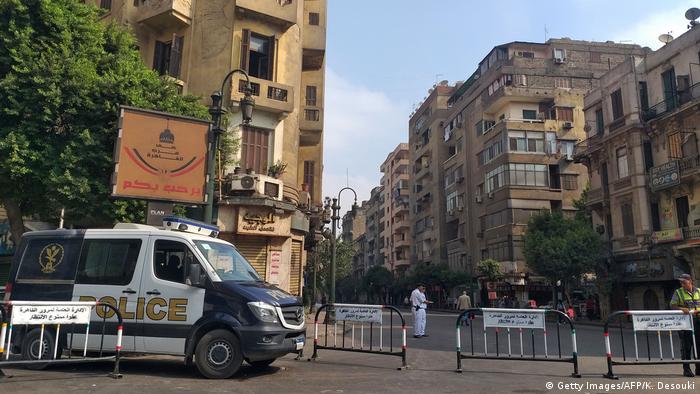 Egyptian authorities tightened security in Cairo on Friday, closing metro stations and sealing off Tahrir Square, after calls for a "million-man march" and a "people's revolution" against President Abdel-Fattah el-Sissi.

As of early Friday evening, there have been no reports of large-scale protests breaking out, though there were smaller anti-government demonstrations that were quickly broken up by authorities. Hundreds of el-Sissi's supporters, however, rallied in eastern Cairo, raising the president's picture and waving the Egyptian flag.

Read more: Muslim Brotherhood or el-Sissi rivals: Who is behind Egypt's protests?

The calls for public demonstrations against the Egyptian president were made by self-exiled Egyptian construction magnate Mohamed Ali, who earlier this month accused el-Sissi and the Egyptian military of misusing of public funds to build presidential palaces and a tomb for the president's mother.

The accusations sparked widespread protests in Cairo and several other Egyptian cities last week, with hundreds of people taking to the streets demanding el-Sissi resign. Such demonstrations are rare in Egypt, where political opposition is stifled by el-Sissi's authoritarian government.

Amid reports of mass arrests, the UN criticized Egypt's approach to dealing with protesters, and urged authorities to adhere to due process.

"I urge the authorities to radically change their approach to any future protests, including those that may take place today," UN rights chief Michelle Bachelet said in a statement on Friday.  She also insisted that "all those arrested and detained solely for exercising their rights should be released immediately."

Since last week, rights monitors say more than 2,000 people have been arrested, although the state prosecutor's office says it has not questioned more than 1,000 people.

Arriving back to Egypt from the UN General Assembly, el-Sissi spoke with reporters and dismissed the protests.

"Egyptians cannot be deceived. There is no reason for concern," he said, adding that the accusations against him didn't deserve attention.

"This is an image being painted as was done before, comprised of lies and defamation and some media working to present an image that isn't true," el-Sissi posted on Facebook.