Egyptian authorities have raided and shuttered the Nadeem Center for the Rehabilitation of Victims of Violence and Torture in Cairo. The center had documented alleged human rights abuses and treated torture victims. 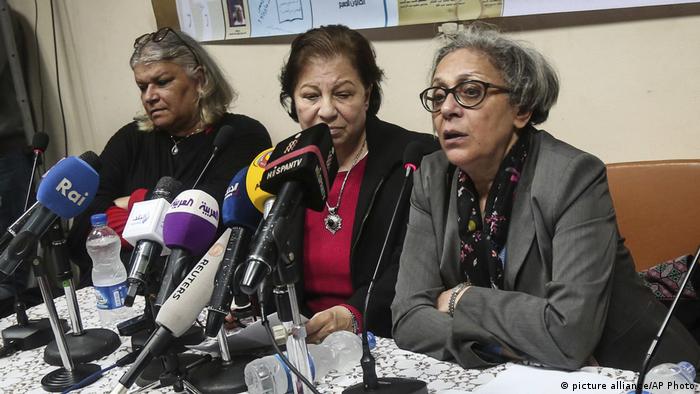 Aida Seif el-Dawla (pictured above, center), a co-founder of the Nadeem Center for the Rehabilitation of Victims of Violence and Torture, said staff had arrived at work on Thursday only to find it had been sealed off by police.

The closure came as she was fighting a court order issued just under a year ago to have the center shuttered.

The vague government order reportedly claims that the center was in breach of Health Ministry regulations. However, the closure comes amid increasing prosecution of non-government organizations and rights activists in Egypt.

Last year, the Nadeem center said it recorded some 600 cases of police torture and almost 500 killings by security force. The numbers, however, have not been independently verified.

The government of Egyptian President Abdel Fattah el-Sisi has admitted to isolated cases of torture, but denies that it is a systemic problem.

"The center was sealed with wax today as per the order issued in February 2016 which we have challenged in court," Taher Abu al-Nasr, who represents the Nadeem Center, said. Authorities shut down the clinic without waiting for the outcome of the judicial appeal, he said.

The head of rights group Amnesty International's regional Tunis office, Najia Bounaim, said, "Today's shutdown of the Nadeem Center, an organization which offers crucial support to survivors of torture and violence, is yet another shocking attack on civil society in Egypt."

"The move exposes the chilling extremes to which the authorities are prepared to go to in their relentless and unprecedented persecution of human rights activists in recent years," she said.

The Nadeem center, founded in 1993, was one of a number of organizations reportedly under investigation for receiving foreign funds in a case that has been widely condemned for being politically motivated.

Asset freezes in Egypt have paved the way for the criminal prosecution of prominent human rights activists. Observers fear the case is a signal that the state's assault on civil society may escalate. (17.09.2016)

Rights activist and NGOs have said that they are being subjected to one of the worst crackdowns on dissent under El-Sisi, with numerous organizations having been accused of fomenting unrest during the 2011 uprising and receiving foreign funds to sow chaos.

Mona Eltahawy, an Egyptian-American author and government critic, told the AP news agency that Nadeem was part of a wider targeted crackdown on civil society groups.

"When you correlate all these things, the people who are attacked - whether through hacking or through arrest - the pattern is obvious: the regime is trying to silence any voice that opposes it and any voice that documents its crimes and wants the world to know those crimes," she said

After the Storm - Part 1

After the Storm - Egypt's Economy and a New Beginning - Part 1