The early oil painting by Vincent van Gogh is to be displayed in Brussels and New York following its sale to a buyer in North America. Fishing Net Menders in the Dunes was painted when the artist was 29 years old. 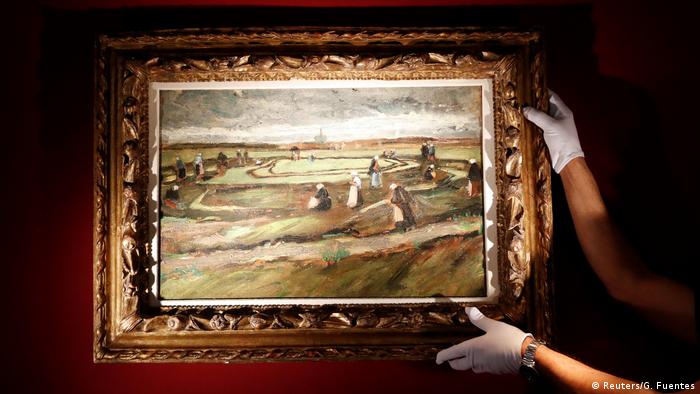 A buyer based in North America paid €7.07 million ($8.27 million) for the 1882 painting Fishing Net Menders in the Dunes (Raccommodeuses de filets dans les dunes), which will be shown in Brussels and New York, auction house Artcurial said late on Monday.

Estimated at between €3-5 million, despite his later works reaching more than €70 million, it nevertheless reached way above its reserve.

According to Artcurial, the sale was "a world record for a landscape of Van Gogh in his Dutch period, sold at auction."

Van Gogh's paintings have been a target for thieves, and for fraudsters.

A landscape by the artist as a young man

Vincent Van Gogh painted the oil in the countryside around The Hague by the North Sea, in his native Holland when he was 29 years old, before he moved to France.

It comes from his realist period when he focused on poverty, often taking peasants or young people as his subjects to paint.

"You find already all the characteristics of Vincent's painting," Artcurial's Bruno Jaubert noted. "Notably the treatment of the countryside, leaving the principal place to the land, and the well-worked skies."

The painting has been on display in The Hague for decades.

Only two or three of Van Gogh's works appear on the international market each year, and Fishing Net Menders in the Dunes was the first to be auctioned in France in 20 years.

The previous Van Gogh brought to auction in France was his 1890 Garden in Auvers which reached $10 million at auction in 1990.

Two new works have been added to Vincent van Gogh's official oeuvre. The discovery of an unknown drawing by the Dutch painter has allowed the authentication of a second sketch. (16.01.2018)